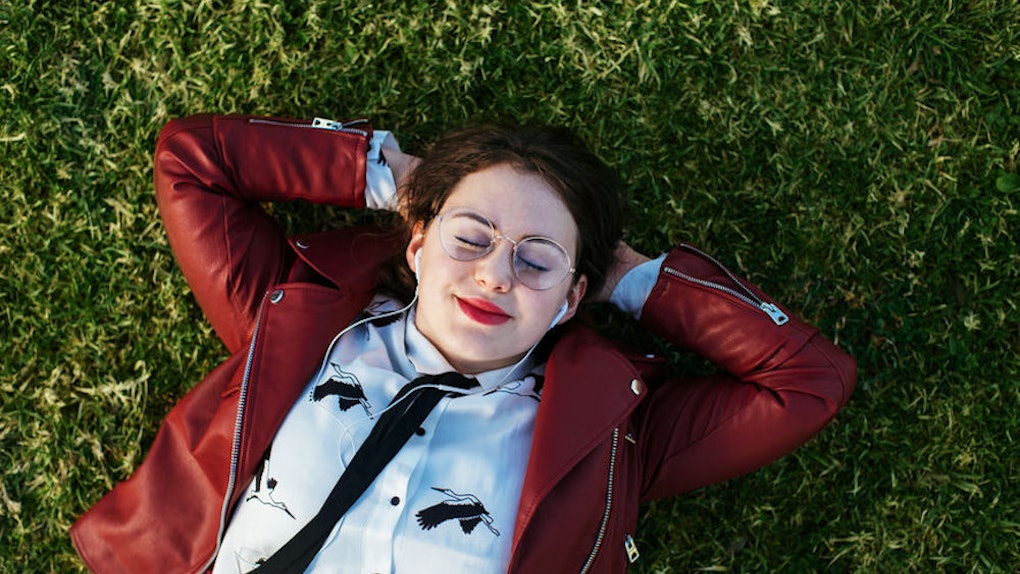 How Does Music Help You Fall Asleep? This Survey Says More People Are Turning To Bedtime Tunes

For at least the past 10 years, I've been falling asleep to the sound of my favorite NPR podcasts. No offense to the hosts of Car Talk or the wonderful cast of Wait, Wait Don't Tell Me, but there's nothing more relaxing than playing a podcast, setting the sleep timer for 15 minutes, and letting my mind wind down from the day's activities. On my more desperate nights, I've even been known to queue up an album of Franz Liszt's greatest hits to really get me snoozing. But how exactly does music help you fall asleep? According to a new study, it might just be that many of us think music helps us doze off, and therefore we lean on it as a crutch — but is there any evidence to suggest that a good playlist actually does something to the brain or body to help you snooze?

Well, let's start with the new research, which, according to a ScienceDaily press release, says that more and more people are turning to music to help them fall asleep. The study, which has been published in the scientific journal PLOS ONE, looked at people's self-reported sleep habits, including what they listen to at bedtime. After surveying 651 people (who were between 18 and 79 years old, with an average age of 33 years old, as per the research paper) through an online questionnaire, the results showed that 62 percent of the respondents use music to help them fall asleep.

Younger people who regularly listen to music in their everyday life were more likely to say they enjoy passing out with tunes in the background, the study found, and apparently, those surveyed aren't just turning to classics like Mozart or Chopin to help them drift off. Rather, according to the press release, the survey respondents showed preferences for as many as 14 different genres of music to listen to at bedtime.

While the results of this survey only convey people's beliefs about how music affects their sleep, other studies suggest that it could be a genuinely effective practice. But how does this effect actually work?

According to the National Sleep Foundation (NSF), playing your favorite album can directly affect your parasympathetic nervous system, which controls how your body relaxes in order to fall asleep. Per the organization, "when younger adults are given the option to listen to classical music, books on tape, or nothing before bed, the ones who relax with music see the greatest improvement in sleep quality."

While everyone has different tastes, the NSF suggests opting for tunes of about 60 to 80 beats per minute. People do seem to generally like the slower jams in preparation for bed, because according to a 2015 Spotify survey, the gentle crooning of songs by Ed Sheeran and Sam Smith were most likely to appear on Spotify users' sleep playlists, as reported by Billboard.

Consistency seems to be another key part of finding the perfect soundtrack for sleep. “If you always play a James Taylor album to fall asleep, that could be part of your bedtime ritual, and it will help,” Dr. Mathias Basner, an associate professor of sleep and chronobiology in psychiatry at the University of Pennsylvania Perelman School of Medicine, told The Wall Street Journal. According to Dr. Basner, it's more important to figure out what works for you specifically when it comes to sleep habits, rather than stick to something just because other people find it helpful.

But if you need a place to start, a study published in the Journal of Advanced Nursing might be able to offer some guidance. In the study, researchers tested whether silence, classical music, or audiobooks were most effective for prompting sleep. According to the paper, the researchers divided 94 students between 19 and 28 years old (all of whom had reported "sleep complaints") into three groups, and had them spend 45 minutes before bed listening to music, audiobooks, or nothing at all. After three weeks, the researchers found that those who dozed off to classical music showed significantly better sleep quality than the other two groups.

Huh, maybe I really should consider switching from This American Life to Bach during my bedtime routine.

More like this
The TikTok Dance Challenge You Should Try, Based On Your Zodiac Sign
By Chelsea Jackson
The Funniest Album Cover Challenge TikToks Are Full Of Hair Flip Fails
By Marisa Casciano
Lizzo's Birth Chart Explains Her Confidence & Why She's Made For The Spotlight
By Chelsea Jackson
Stay up to date