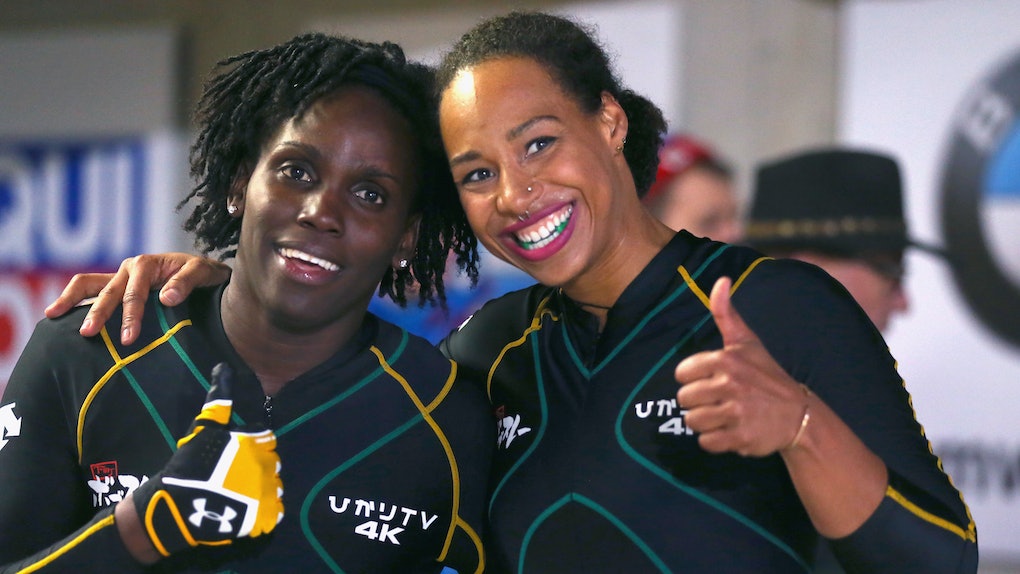 How Do Bobsledders Train For The Olympics? Their Workouts Look Ridiculously Intense

Later this month, Jamaica's first all-women Olympic bobsledding team will be competing in PyeongChang, and it's going to be epic, my friends. These completely badass and incredibly strong ladies are going to be giving it their all on those big sleds, and I personally cannot wait to watch it all go down. If you're like me, you're probably wondering how bobsledders train for their highly demanding and speedy sport. And honestly, it's pretty damn intense, but also partly doable within your own fitness routine — with a few minor tweaks, of course.

According to a video from The New York Times, bobsleds weigh between 400 and 500 pounds. Guys, just consider that act alone for a moment: Think about running at full speed to get one of those bad boys going from zero to 100. Oh, and you're running on ice. I don't know about you, but I'm exhausted just thinking about the ridiculous amount of strength and power this sport requires.

Bobsledders need to be able to accelerate super heavy sleds from the point of being completely stationary, to going as fast as possible in record amounts of time. That doesn't just require being quick on your feet; it also demands a huge amount of explosive strength.

A delicate balance of speed and power is what fuels bobsledders' exercise routines, so explosive workouts are key in their everyday training leading up to the Winter Olympics.

According to The New York Times, when bobsledders hit the gym, their workouts include a combination of heavy weightlifting and strenuous, explosive exercises — emphasis on the explosiveness. Taking it slow and steady in the weight room is not an option for bobsledders, and their heavy weightlifting days include things like power cleans, front squats, and deadlifts. (If you've never tried those, trust me, they're basically as intense as exercise gets.)

Being a professional bobsledder means you'll be doing, for the most part, a combination of bodyweight exercises and sprints, as these high-intensity workouts will increase your ability to be as explosive and speedy as possible, rather than being just plain strong. Jump squats, box jumps, and jump lunges are plyometric leg exercises included in a typical bobsledder's training schedule. These exercises make sure that the lower body is as agile and powerful as possible.

Maintaining total-body awareness during bobsledding training workouts is imperative for their athletic success, as well.

While explosiveness is definitely one of the largest components of bobsledders' workouts, body awareness is crucial to take things to the next level and actually come out on top during the competition. This is because, when you're trying to accelerate the sled to go full speed ahead, simply using brute strength won't cut it. If you did that, you'd be the one being pulled by the sled, and you would probably lose all of your control of what's happening. Bobsledders have to be able to carefully control their explosive power, so that they're the ones with command over the sled, not the other way around.

According to NBC Sports, bobsledding athletes also use training bobsleds, which are different than the sleds they use during the actual Olympics. The training sleds are specifically designed for their intensive pre-race workouts, in which the coaches have the athletes add extra weight to the already extremely heavy bobsled for an extra dose of resistance training, and so that they'll be more comfortable and secure in accelerating the "lighter" bobsleds during the actual Olympics.

So, obviously, you can't exactly replicate a bobsledder's workout routine to a T — unless you're casually strong enough to push 500 pounds without breaking a sweat, in which case, do you, boo. But for real, if you want to try to be even remotely as cool as the women's Jamaican bobsledding team in the Olympics while you're doing your own thing at the gym, you can try incorporating some of their routine jump squats and lunges into your sweat sesh — and maybe even throw a couple of explosive burpees in there for good measure.

At the end of the day, though, you're probably not going to be the one pushing a 500-pound bobsled down an icy slope as fast as you can, so there are some parts of their training that are simply too extreme to fathom. Let's just leave the ultra intense training aspects to the pros, shall we?

More like this
Can I Exercise After A Flu Shot? Experts Recommend Listening To Your Body Post Vaccine
By Georgina Berbari
I Tried Working Out With A Kardashian Trainer & Now I Never Want To Be Famous
By Rachel Varina
TikTok's #NotTheMainCharacter Trend Shows The Supporting Role You Connect With Most
By Marisa Casciano
Stay up to date