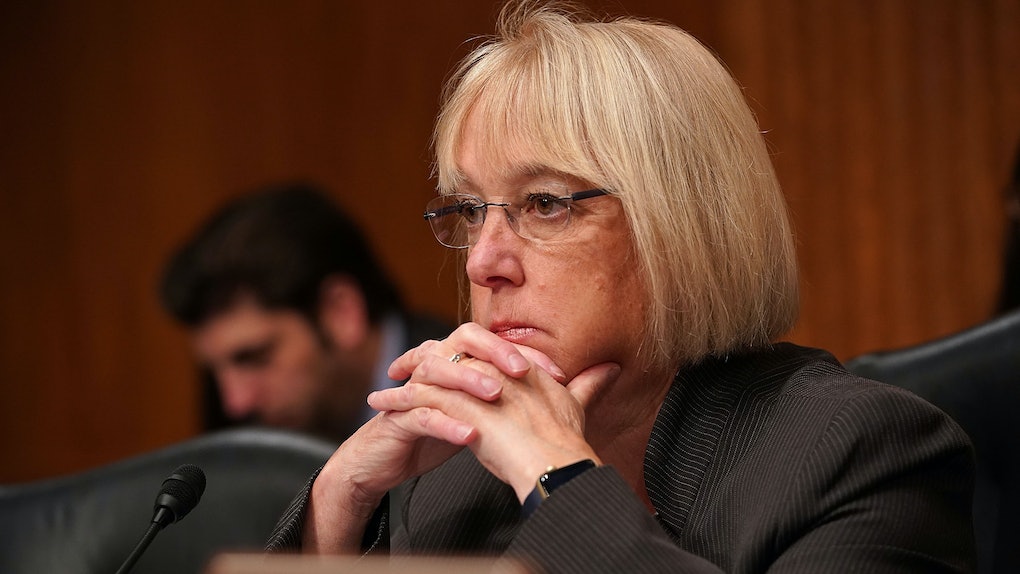 On Monday night, July 9, President Donald Trump announced that he was nominating Judge Brett Kavanaugh to the Supreme Court to fill the space vacated by Justice Anthony Kennedy. The U.S. Court of Appeals for the District of Columbia judge leans conservative, leading many to be concerned about his potential appointment to a lifetime position on the court. If you are one of those people wondering how to protest Kavanaugh's nomination, Washington state Sen. Patty Murray, a Democrat, has a few ideas.

"We have to do everything we can to get the word out about who this nominee is, what he stands for, and what it will mean for everyday, average Americans — for people with pre-existing conditions, for women when they’re making their own health care choices, for the environment, and beyond. People need to understand this is a critical choice and a critical turn for our country," Murray tells me in an interview for Elite Daily the morning after Trump announced his nomination.

Murray is among a group of Democratic senators strongly opposing Kavanaugh's appointment to the Supreme Court. To be appointed to the Supreme Court, Kavanaugh will need to be approved by a simple majority vote in the Senate. As it stands, there are 51 Republican senators (out of 100), which means, Murray acknowledges, that Democratic senators "don’t have many options." To block the nomination, all Democrats would have to vote against it, as would at least two Republicans (should just one vote against it, landing the vote at a tie, Vice President Mike Pence would be the tie-breaker).

"The fact is that it’s a Republican majority and we will need Republicans to vote against this nominee," Murray says. However, she says, that doesn't mean there's nothing average citizens can do. In fact, average citizens are the ones who could influence votes for this nomination — by informing the senators who represent them that they are watching the vote and want to see them vote against it.

Murray cites last year's defeated attempt to repeal the Affordable Care Act as evidence that constituents' calls to senators (along with other forms of activism) do work to influence their votes.

With Kavanaugh on the court, the Supreme Court would have a fairly solid conservative majority. Kennedy had previously been a sort of swing vote on major issues (abortion, same-sex marriage, affirmative action, etc.), so his absence leaves the four more liberal justices (Ruth Bader Ginsburg, Sonia Sotomayor, Elena Kagan, and Stephen Breyer) without that vital possible fifth vote.

This is especially concerning for reproductive rights advocates, especially as President Trump repeatedly claimed that he would nominate justices to overturn Roe v. Wade, the landmark 1973 Supreme Court decision that declared abortion a legal right across the country. Although Kavanaugh said in 2006 that he "would follow Roe v. Wade faithfully and fully," his overall stance on abortion appears to lean conservative, which his endorsement by Trump seems to confirm. Last year, for instance, he sided with the Trump administration in a dissent against allowing an undocumented teenager to get an abortion.

"I think the frightening reality we all need to face is that if he’s confirmed, five [conservative-leaning] men on this court will be empowered to overturn Roe v. Wade and take us back to a day when women didn’t have access to safe, legal abortion choice," Murray says.

Although Democrats don't have the majority in the Senate and Sen. Mitch McConnell said he wants this vote to happen in the fall, there is likely going to be time for people to make their opinions heard. Murray explains that it will take time for the White House to put together the "very long paper trail" on Kavanaugh's background for the Senate to review before they vote on him.

"It is extremely critical that we have the opportunity to review his papers before we put him onto a lifetime position on the Supreme Court, and that’s another thing we’re demanding," she says.

Until then, Americans have time to call up their senators and tell them how they're feeling about a Supreme Court vote. (The Capitol switchboard number is 202-224-3121; only ask to speak to the legislators who actually represent the state you live and vote in.)

"President Trump has said from the beginning that he will pick a nominee that will strike down Roe v. Wade and criminalize abortion and [that] he will make sure that he has a nominee who will gut pre-existing conditions for all Americans who need access to health care," Murray says. "He picked that person, and now we need people across the country to stand up and say, 'No, this is not the values that we stand for.'"