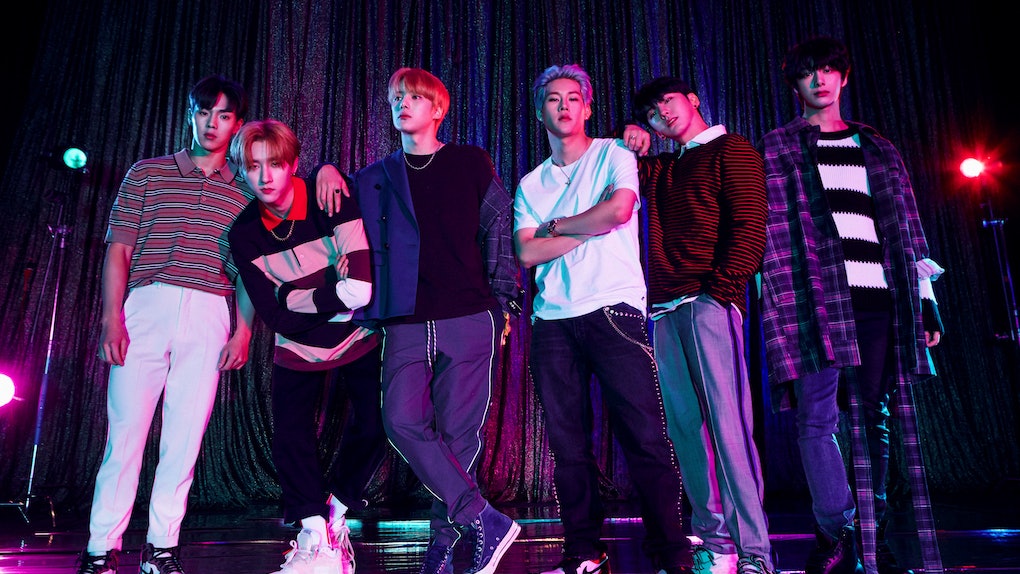 Monsta X had big plans for 2020. Following the release of their All About Luv and FANTASIA X albums, the group was meant to go on a massive tour across the U.S. and Canada to perform their new songs live for the first time. Unfortunately, like many artists, the group was forced to postpone their shows until 2021 due to the worldwide coronavirus pandemic. Instead of waiting until next year to give their fans another live performance, Monsta X put on a virtual concert called Live from Seoul with Luv on Aug. 8. The set was just another example of how Monsta X's challenges bring them even closer to fans. In fact, Monsta X and their Monbebe are feeling more connected than ever.

With Monsta X rescheduling their tour dates, their virtual concert was a way to let fans know they're thinking about them. "We are sorry that we can't meet you all in person, but we’re doing our best so that Monbebe don't feel like we're far away from each other," Monsta X tells Elite Daily in a joint statement. "Although we can't meet our fans directly now, we wanted to communicate and have fun with our fans somehow. Because we can't just wait ... I think we've found the most efficient way to show ourselves."

To make their show feel like a real-life tour stop, Monsta X kept their ticket packages and meet-and-greet options (which could be viewed virtually) and offered merchandise bundles that could be shipped to fans' homes.

In some ways, Live from Seoul with Luv was more interactive than anything the group has done before. During the concert, Monbebe could view multi-cam footage of each member, giving everyone an equally amazing front-row seat.

The members agree communicating with fans is their top priority, and they won't let a few setbacks come between them. "To connect with Monbebe at a time like this is the only thing we want to do. We think it’s important because there are fans who miss us and want to see us," Shownu says, with Kihyun adding he feels "responsible" for cheering fans up during this "hard time."

Monsta X's title track off FANTASIA X reflects these feelings of pushing through difficult situations because the lyrics are about persevering and creating a new world after a heavy storm. "The wave strikes and shakes me up... I won’t bend my knees. I won’t be bent," the group sings on the track.

Not being able to see fans in person this summer wasn't the group's only challenge. Originally, Live from Seoul with Luv was planned for July 25, but when Shownu underwent emergency eye surgery a few weeks before the concert, they were forced to push it back two weeks. Even with all the excitement over Live from Seoul with Luv, fans made it clear Shownu's health was the most important thing to them — a sentiment he appreciates. "My eye is perfectly back to normal. Thank you for the well wishes, Monbebe," Shownu reassures fans concerned about his condition.

In the end, Live from Seoul with Luv was well worth the wait. Apart from performing classic favorites like "Hero" and "Dramarama," Monsta X's virtual setlist included songs from their first all-English album All About Luv, released in February, as well as FANTASIA X. The show was so successful, all six members' names trended separately in the U.S. on Twitter during the concert.

Having a comeback during the pandemic was a unique experience for the group, but what remained the same was their enthusiasm for sharing their music with the world. "Like any other comeback, it was exciting and a little hard, but the moment of releasing a new album is always precious," Monsta X explains in a joint statement.

Monsta X's virtual concert hasn't been the only thing they've been up to. While taking a break from touring this summer, the group has been participating in charity events like St. Judes' Prom From Home, Twitch Aid Fundraising Stream, and Hail the Heroes. Minhyuk says their decision to get involved is a "little [in] return" for all the love they've received from fans.

As for what's next, Monsta X is already thinking about more new music. "As a team, I'm preparing to come out with a better album, and personally, I'd like to work hard on my songs and show more good songs for my fans," Hyungwon reveals.

"I think this year's plan is to work on my own mixtape album and Monsta X's new song," Joohoney adds.

Until Monsta X makes another comeback, fans can still buy tickets to and stream Live from Seoul with Luv any time until Oct. 9.