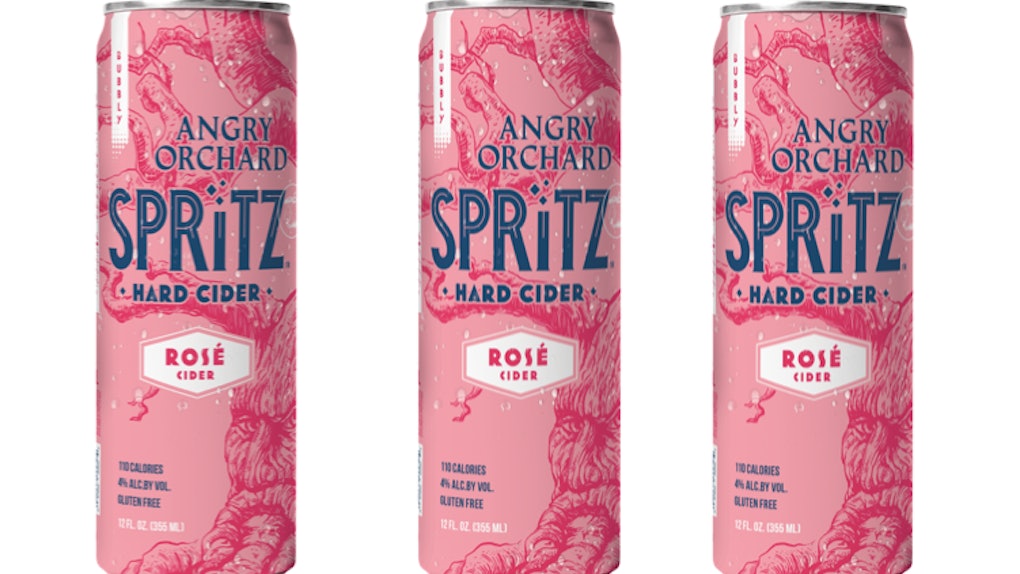 Every summer, a new drink trend rolls in, and the summer sip for 2019 is — without a doubt — the spritz. And even though Angry Orchard usually tends to stick to classic cider, the brand spritz-ified one its famous flavors, creating a new (and extra light!) drink. So, here's where to get Angry Orchard's Spritz Rosé Hard Cider if you haven't already gotten to try it. I haven't sipped it yet, but I think I'm already in love.

You most likely recall early last year in February 2018, when Angry Orchard first released its take on Rosé Cider. It has the flowery taste of rosé wine that you've probably come to know and love, with fruit-forward hints of crisp apples, and a somewhat sweet aftertaste. The bottom line is that it's damn delicious, and it is — IMHO — one of the brand's greatest creations yet. While Rosé Cider is seriously perfect for hot summer days, the brand's Spritz Rosé Hard Cider is what Angry Orchard describes as "made for the lighter moments in life." So, summer picnics? Rooftop happy hours? You decide.

Angry Orchard Spritz Rosé Hard Cider contains all the elements of a floral rosé wine: It's semi-dry, aromatic, and incredibly light, according to a press release. But, there's a twist. The rosé taste is seamlessly combined with bursts of juicy red-flesh apple as well as bright and effervescent bubbles. Like I said, it's a much lighter take on the classic drink, it contains a relatively low ABV of 4.0%, and it's a perfect midday sip for a particularly hot summer day.

If this sounds up your alley in any way, you're in luck. Angry Orchard's Spritz Rosé Hard Cider is now available at a variety of retailers. Yep, you heard that loud and clear, but there's a catch — according to the press release, it's only available in select markets throughout New Jersey; Minneapolis, Minnesota; Massachusetts; and Philadelphia, Pennsylvania at retailers such as Total Wine, Fairway Liquors, and Beer Peddlers. So unfortunately, if you don't happen to live in any of those regions, you're out of luck.

If you do happen to live in any of the regions listed above, however, you can buy six-packs of 12-ounce slim cans for a suggested retail price of $7.99 to $9.99, according to the press release. But keep in mind that the price will vary by market.

According to the press release, Burk said:

When we set out to create the recipe for Spritz Rosé, we wanted to capture the time of year when friends get together outside, relax and enjoy a meal and each other's company. In the end, we crafted a new style of rosé cider that is incredibly refreshing, light and effervescent while still achieving the apple-forward flavor drinkers love about Angry Orchard.

So, let's recap: summer 2019 is — hands down — all about the spritz. And whether you're an Aperol Spritz kind of guy or gal, or if you decide to hop aboard the Angry Orchard Spritz Rosé Hard Cider is entirely up to you. Either way, I can already tell it's about to be a bubbly summer.