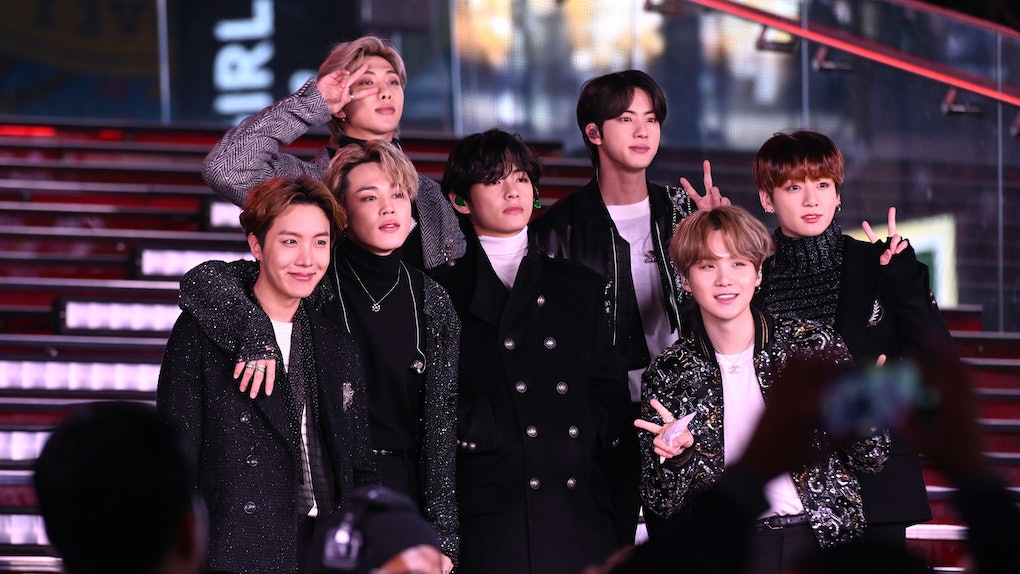 Fresh off the success of its 2020 collaborations with J Balvin and Travis Scott, McDonald's announced it will be partnering with BTS for its latest celebrity meal. With the specialty order set to roll out in the United States, Brazil, and Canada on May 26, ARMYs may be wondering what's in McDonald's BTS meal? One of your favorite Mickey D's offerings is getting a sweet and spicy makeover.

Starting on May 26, McDonald's will begin rolling out the "BTS Meal" in almost 50 countries. Fans in the United States, Canada, and Brazil will be the first to try the K-Pop superstars' "signature order," and the limited-edition combo will make its way to South Korean McDonald's locations on May 27. McDonald's confirmed the BTS meal will be available until June 20 at participating U.S. McDonald's locations, so you'll have just under a month to score the goods. This has been the trend for the chain's celebrity meals, dating back to the company's "Cactus Jack" collaboration with Scott in 2020 that was only available from Sept. 22 through Oct. 4.

Like the Golden Arches' previous collaboration with J Balvin and Scott, the BTS Meal looks pretty familiar at first glance and includes some of the company's most-beloved staples — but with a twist. Along with a 10-piece order of Chicken McNuggets, an order of medium fries, and a medium Coke, McDonald's will be serving up two dipping sauces, Sweet Chili and Cajun, inspired by popular existing sauces in South Korean stores. This is the first time these sauces will be available for U.S.-based customers, giving them a new option for spicing up their McNuggets.

Customers who live in the U.S. have a few contactless ways to order the BTS Meal, including through contactless mobile order and pay in the McDonald's app, through delivery, or when ordering at the drive-thru. If you decide to order your BTS meal in-restaurant, it's a good idea to follow the CDC's most updated guidance on masking and social distancing for takeout.

Following the initial launch of McDonald's BTS collaboration on May 26, it'll be rolling out to almost 50 countries over the next month with a final release in Indonesia on June 25.

Considering Travis Scott's "Cactus Jack" meal was so popular it reportedly caused ingredient shortages nationwide, per CNBC, ARMYs won't want to wait on pairing their go-to McNuggets and fries order with some tangy new sauces when the BTS Meal officially launches on May 26.

More like this
What Does Starbucks' Strawberry Funnel Cake Frappuccino Taste Like? It's A Summery Sip
By Cianna Garrison
BrüMate & Crook & Marker's Hard Pickle Seltzer Is No Joke
By Cianna Garrison
Here's How To Enter Dairy Queen's 2021 Sweetest Season Pass Sweepstakes For A $5K Gift Card
By Lara Walsh
Stay up to date