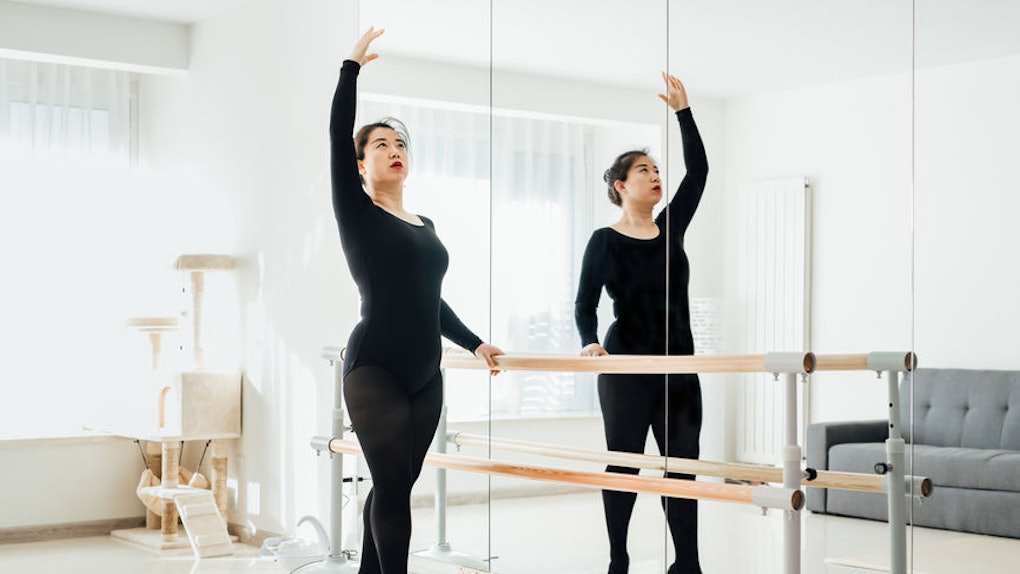 Here's What To Look For In A Workout Class If You Want To Stay Motivated, According To Experts

How do you usually feel after a workout class? Exhausted? Confident? Disappointed? Strong? Personally, I like to finish a workout feeling unstoppable, powerful, like I could literally conquer the world, sweaty hair and all. I don't know about you, but oftentimes, it's the teacher in my workout class who can truly make or break how I feel about the whole thing by the time I leave the studio. In fact, when it comes to what you should look for in a workout class, a new study suggests paying close attention to the instructor who guides you through each exercise, because chances are, their feedback could be affecting you more than you realize.

The new study comes from Northwestern University, where researchers gathered a group of about 200 college-aged women to participate in a 16-minute group workout class "that featured either appearance-focused motivational comments by the instructor (e.g., 'Blast that cellulite!') or function-focused comments (e.g., 'Think of how strong you are getting!')," as per the research paper, which has been published in the Journal of Clinical Sport Psychology. Before and after the class, the study explains, the participants filled out a questionnaire that measured their "body satisfaction" in that moment, which allowed the researchers to see if the instructor's feedback made any difference in how the volunteers felt pre- and post-exercise.

According to a Northwestern University press release about the study, the results showed that fitness instructors' comments can definitely affect how you feel about your workout. Specifically, the researchers found that if the instructor focuses on talking about how a workout will benefit your health or improve your strength, you'll probably feel more positive after the fact than if the instructor gives feedback solely about how your body will look in relation to a certain exercise.

"We also asked the women to list three words that described how they felt at the end of class," lead study author Renee Engeln said in a statement for the press release. "Those who heard appearance-focused comments were much more likely to write things like ‘ashamed’ and ‘disgusted with myself.’ Those in the health-focused classes were more likely to write things like ‘accomplished’ and ‘strong.’”

When you're getting your sweat on in a group workout class, positive reinforcement from the instructor can be a total game-changer. For Ronnie Lubischer, CSCS, owner of Lubischer's Burn and Blast Training, motivating his clients is "never about breaking [them] down, but about building them up," and he does this in a pretty intriguing way. "Rather than play music during group classes, we’ll play powerful motivational speeches," Lubischer tells Elite Daily in an email. "To hear that kind of positive reinforcement during a workout prepares you for any difficulties you may face in your day."

As for Leah Kalemba, a fitness instructor for Fighthouse MMA and Moveir Dance Studio, she tells me she tries to remember that our brains power our movements, and that negative internal dialogue can hold a person back from their body’s true potential. "That’s why I focus my comments on the moment, rather than counting down how much time is left in the class, which can discourage someone who’s feeling worn down," she tells Elite Daily over email. For example, Kalemba explains, “just 15 more minutes” can feel like eternity if you’re already barely hanging on with each aching minute.

"Most of the struggle is in your mind," she adds, "which is why it’s so important to find a fitness environment that’s a match to your motivational style."

Plus, Kalemba notes, "energy is contagious, so it certainly helps if the instructor is exuding it from head to toe."

And during the cool-down, Kalemba tells me she likes to remind her clients about the important commitment they've made to their bodies, and she often suggests a post-workout reward, like a nice, epsom salt bath to soak and soothe the muscles. Sounds like total bliss to me.

More like this
I Tried Singing While Running Like Miley Cyrus & OMG, My Lungs
By Rachel Varina
These 40 Clever Vaccine Selfie Instagram Captions Deserve A Shot On Your Feed
By Rachel Chapman
Away's Travel Accessories Collection Brings Comfort To You In Any Destination
By Marisa Casciano
Stay up to date