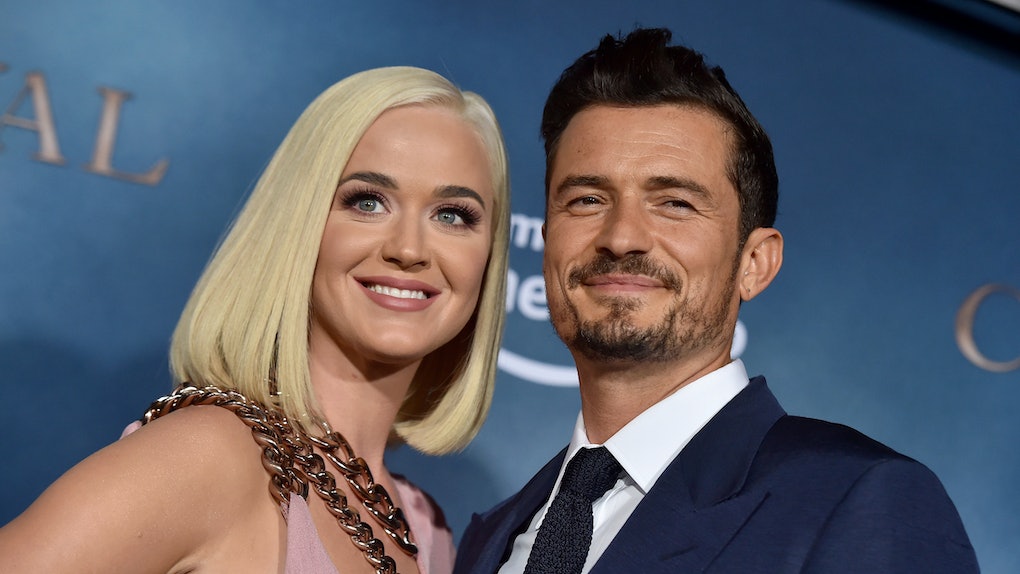 For those looking forward to Katy Perry and Orlando Bloom's nuptials, I have some bad news for you: You're probably going to have to wait a little bit longer. However, the reported reason why Katy Perry and Orlando Bloom postponed their wedding planning makes a lot of sense. As a source for Us Weekly reportedly claimed, the two currently have their hands full with their first child, Daisy Dove, who was born on Aug. 26. "Katy and Orlando's wedding will not be taking place in 2020," the source reportedly claimed. "It just wasn't meant to be. Their beautiful daughter arrived and she is their sole focus." (Elite Daily reached to reps for both Perry and Bloom for comment on their wedding plans but didn't hear back in time for publication.)

Perry and Bloom originally planned to have a winter wedding in December 2019, but "they changed the timing due to the location they want," another source for Us Weekly claimed at the time. The date was rescheduled for 2020, but the big day was delayed once again due to the coronavirus pandemic. And though "planning for any wedding has been put on hold" at the moment, according to Us Weekly's source, the wedding is reportedly still on. "It will happen, but it's just not something they are focused on as a couple currently," the source reportedly added.

In March 2020, a source for People reportedly claimed the two had plans to tie the knot in Japan in early summer 2020. "It was all set for Japan with 150 guests," the insider reportedly claimed. "Katy was actually really excited about walking down the aisle pregnant. They were both so elated that all the wedding details were finally coming together, but they are hitting pause because of coronavirus."

During an August 2020 interview with Apple Music’s Zane Lowe, Perry said, if 2020 taught her and her fiancé anything, it was to expect the unexpected. "For us it's about partnership and it's about right now taking it one week at a time," she explained. "We had a whole thing planned and that got canceled. So we're just looking forward to a healthy arrival at this point in time. It's funny. It's like, 'Don't make too many plans this year because it's a real go with the flow time.'"

Their "healthy arrival" went as planned, so here's hoping Perry and Bloom are eventually able to have their dream wedding day, whenever that may be.

More like this
When Are Ariana Grande & Dalton Gomez Getting Married? Here's The Reported Tea
By Corinne Sullivan
Why Did Jennifer Lopez & Alex Rodriguez Break Up? She Dropped A Hint On Instagram
By Candice Jalili
Zoë Kravitz's Instagram With Taylour Paige Shows Them Looking So Happy Together
By Candice Jalili
Stay up to date