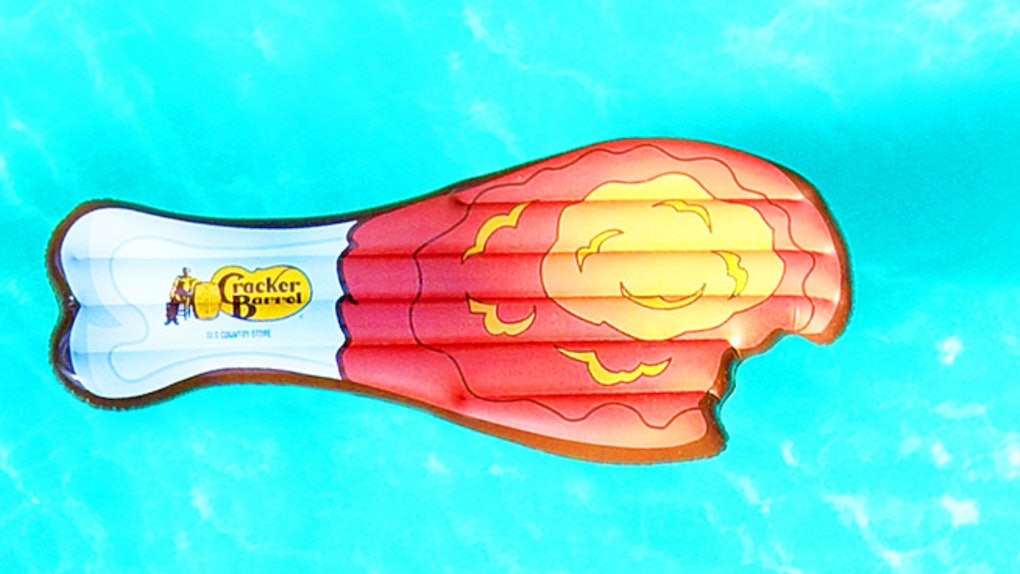 It's almost summertime, folks, and there's no better way to prepare for the warmest, sunniest season of the year than by dusting off all your swimsuits and floats and getting ready for a few months poolside. Don't have a pool float? Southern-themed chain restaurant Cracker Barrel is here to change that. Cracker Barrel wants to give chicken-lovers a shot at winning a pool float in the shape of their absolute favorite food, fried chicken (obvi). Here's how to win Cracker Barrel's chicken pool float for some serious southern-fried fun in the sun.

Summer 2019 is going to be the season of unique and eye-catching pool floats, and what could possibly be more eye-catching than a drumstick-shaped accessory floating around? Cracker Barrel's Southern Fried Chicken pool float looks as delicious as it sounds (but, uh, don't actually try to eat it). The orange-brown coloring and ridges imitate actual fried chicken pieces, and a yellow slab in the middle is reminiscent of the sweet honey that the restaurant's chicken is served with. Plus, the drumstick pool float has a bite taken out of it for added character — because you know if you could take a bite of the float you would.

Cracker Barrel's Southern Fried Chicken pool float is a limited-edition summer item that you can't order online or buy in stores — you have to win it directly from the restaurant's website. Here's how: From May 22 at 12 p.m. ET to June 21 (or while supplies last), visit Cracker Barrel's "Chickenisms" page and submit your best fried chicken-inspired saying or pun. According to Delish, winners of the best saying or pun will be announced on the week of June 24, so get your very best jokes and most cringeworthy puns at the ready. Remember, while you can always look up puns online, creativity and originality will likely be your best friends in a contest like this.

The contest is part of Cracker Barrel's new push to promote its new Southern Fried Chicken, a crispy, hand-breaded, seasoned chicken recipe that is becoming a permanent addition to Cracker Barrel menus. As part of the promotion, the restaurant chain has invented something called chickenisms, inspiring chicken-related thoughts like, "a wise person once said get the fried chicken," or "all's well that ends in fried chicken." The pool float contest asks fans to create their own version of a chickenism, which shouldn't be all that hard if you're a fried chicken addict or Cracker Barrel fanatic.

If you're looking for an even spicer poolside hang this summer, you might also want to check out Taco Bell's Hot Sauce Packet Pool Float. This orange ridged pool float from Taco Bell's Taco Shop looks exactly like a hot sauce packet and looks comfy enough to float around on all day. According to the retailer website, the float is 43 inches wide by 80 inches tall and costs $45.

Whichever food-related pool float you prefer to feature during your summertime festivities, one thing's for certain — you're definitely going have the coolest float at the pool party, no questions asked. Just try not to drop your drumstick in the pool.