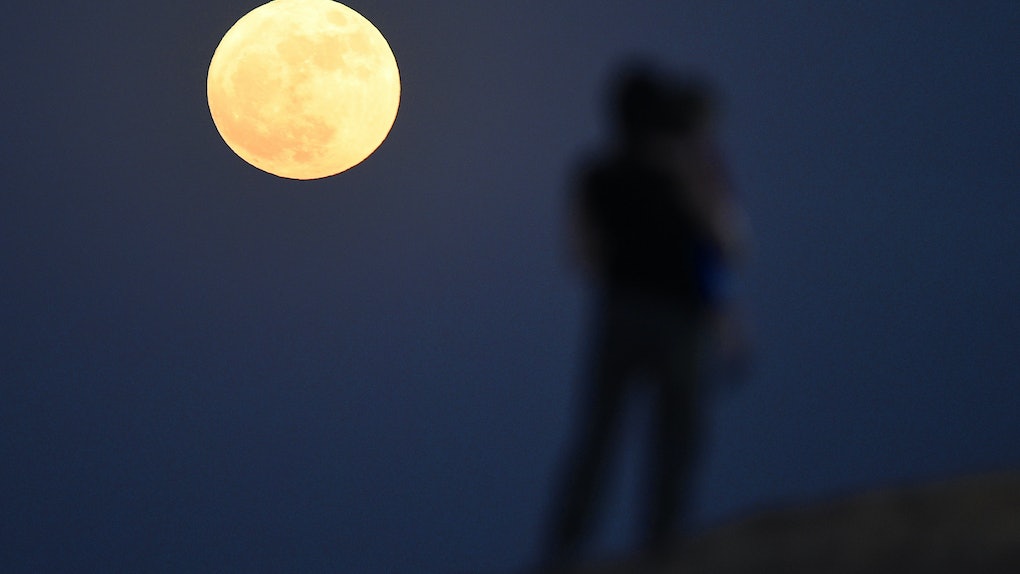 Here's How To See The Super Blue Blood Moon If It's Cloudy, Because It Is Possible

If you're one of the special remaining people in this world who still make a point to look up at the sky instead of always looking down at your smart phone, you're probably anticipating the super blue blood moon. Occurring at the end of January, the super blue blood moon is predicted to be a truly breath-taking sight, and we're seriously crossing our fingers for clear skies. But in the event that there are a ton of clouds in the sky, here's how to see the super blue blood moon if it's cloudy, because regardless of weather, experiencing it on some level is absolutely vital.

The super blue blood moon will happen Jan. 31, and if you're looking to see it in person NASA says the best time to head out is around 6:45 a.m. ET, if you're in New York City. (You should also aim to go to a "high place" and look to the north-northwest, away from sunrise.) On the West Coast, the eclipse will begin around 3:48 a.m. PT, and anyone in the Middle East, Asia, eastern Russia, Australia, or New Zealand can watch the super blue blood moon during moonrise the morning of Jan. 31. NASA says that with good weather, the West Coast, Alaska, and Hawaii will have a the best view of totality. Viewing will be tougher in Eastern time zone, however, since it'll be light when the eclipse happens.

The answer to the overarching question, though: "can you see the super blue blood moon in cloudy conditions?" is not what us moon children want to hear. To view the super blue blood moon, according to UK news site, Express.co, the Royal Observatory Greenwich says a cloudless night is absolutely necessary for sky-viewing. So the pressure for clear skies is totally on, at this point in time.

While you might be worrying now that you might not be able to see the super blue blood moon, the good news is that even with bad weather there's no way you'll be totally left out from some awesome moon viewing.

If the weather is cloudy, or if it's too light out, NASA TV and NASA's website will be offering a live feed of the eclipse if you can't totally see it from wherever you are. They also alert moon-lovers to make sure to follow the eclipse on @NASAMoon, because they'll be posting facts, extra sweet deets, and tips on the best ways to see it. So don't worry if you can't see the super blue blood moon in person, because either way, you'll definitely be able to watch it from the comfort of your bed. That is, if you don't sleep through it.

Like myself, if you're totally and utterly enthralled by science but literally don't understand any of it, there's a likely chance that you're wondering what a super blue blood moon is, exactly.

A supermoon happens when the moon gets super close to Earth in its orbit, and it looks really big and bright. Even though it isn't actually bigger, it appears to be.

A blood moon, on the other hand, is a moon going through a total lunar eclipse, which is when the moon orbits through the Earth's shadow, and it's blocked by sunlight, taking on the appearance of a sunset.

Finally, a blue moon, which we all thought was just part of that one expression, actually occurs every 2.7 years (not as rare as we thought), and it's when there's a second full moon in the span of a month. So, a super blue blood moon is when all of these moon-related phenomena occur at once, which hasn't happened in 150 years, and it's totally lit (moon-lit, that is).