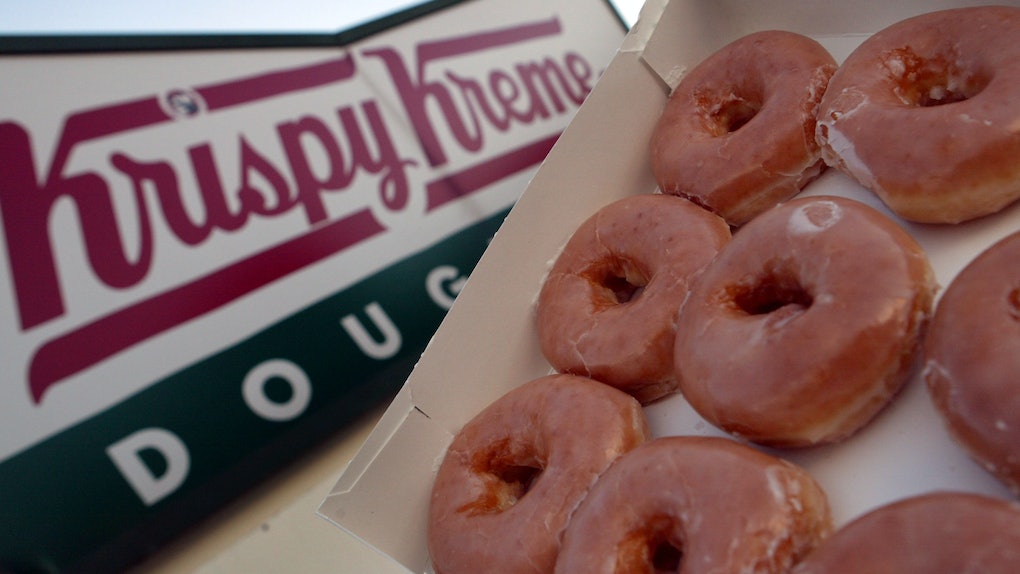 When January hits, and it's perpetually cloudy and a frigid 26 degrees outside, I tend not to be too wild about it. Apologies for my downer attitude, but let's face it: The month of January can be kind of a bummer. So, you can probably imagine how thrilled I am to find out that Krispy Kreme is giving away free boxes of doughnuts this month (yeah baby!). If you want to get in on the complimentary doughnut action, you might be wondering what you need to do. Well, here's how to get free Krispy Kreme doughnuts in January 2019 to make the first month of the year a little more bearable.

January's cold weather might have you feeling dehydrated AF, and there's also a good chance you're participating in dry January. But, let me be the one to reassure y'all that it's all uphill from here. Between Jan. 14 and Jan. 27, participating Krispy Kreme shops will be offering entire free boxes of 12 Original Glazed Krispy Kreme doughnuts to any and all customers, according to a press release. But, there's a catch...

Except IMO, it's not really a catch. To take advantage of the deal, per the release, customers will simply have to join Krispy Kreme rewards, after downloading the Krispy Kreme Doughnuts app or logging on to the Krispy Kreme's website. After doing so, you'll be able to get a free dozen of Original Glazed Doughnuts with the purchase of any dozen Krispy Kreme Doughnuts. It's pretty straightforward BOGO deal, and it's a super tasty one. Plus, once you're a rewards member, you'll get updates on all the latest and greatest Krispy Kreme innovations and deals. Sounds pretty darn good to me.

To be completely real with each and every one of you, I would do a helluva lot more than just creating a rewards account to get a free box of Krispy Kreme doughnuts LOL. Downloading the app or logging on to the website and becoming a member is like, nothing, so there's no reason you shouldn't be taking advantage of this glorious offer. Plus, you'll be getting two dozen doughnuts for the price of one! Just do it. I'm counting on you, and honestly, so is that sweet tooth of yours.

The month of January can be — well — the freakin' worst, but on the bright side, there are a ton of exciting things happening at Krispy Kreme in the next few weeks. Between free boxes of Original Glazed and its new chocolate collection, my sweet tooth is going absolutely wild. To be honest, I've never been this excited for mid-January to roll around in my entire life.

More like this
Here's How 2021 Graduates Can Get Free Krispy Kreme Doughnuts For A Tasty Celebration
By Daffany Chan
Here's Where To Buy Naturdays Pineapple Lemonade Beer To Unleash Your Summer Vibes
By Cianna Garrison
How Long Is Pepsi Blue Available? Don't Wait To Sip The Colorful Cola
By Cianna Garrison
Stay up to date