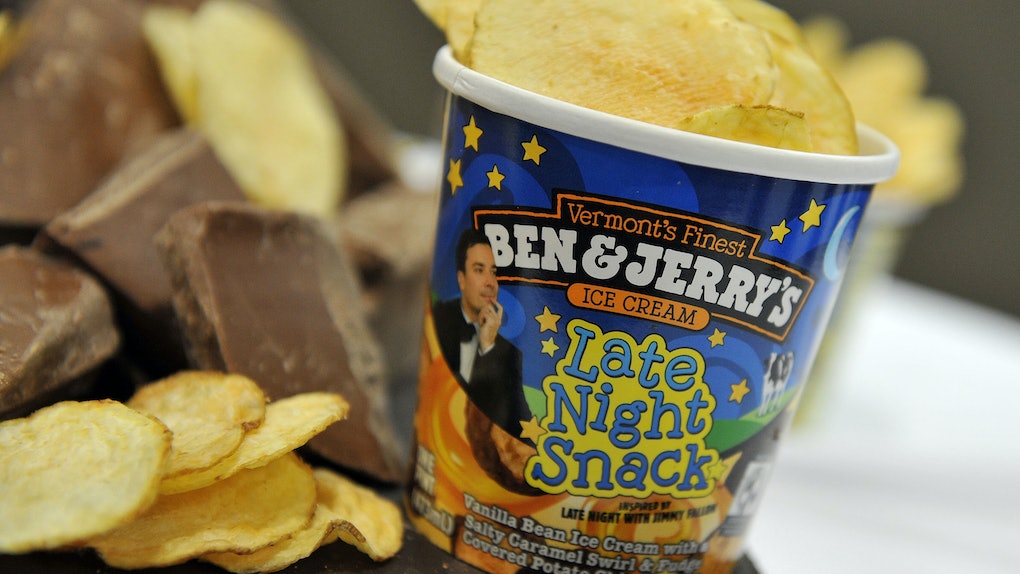 Now that we're over a week into April, it's time to gear up your tastebuds for what's arguably the tastiest holiday of the month. That's right: Free Cone Day, courtesy of Ben & Jerry's, is coming up on Tuesday, April 9, so plan to be living your best life during the mid-week hump. Your free ice cream cone is just a few hours away, so here's how to get free Ben & Jerry's ice cream on April 9.

You'll want to clear your lunch plans on Tuesday, because Ben & Jerry's locations are letting customers get in on a free cone of ice cream from 12 p.m. to 8 p.m. That's right, you can literally stroll into any participating Ben & Jerry's location around the world during that time frame and treat yourself to a cone of Half Baked, Chunky Monkey, Phish Food, or whatever flavor is tickling your fancy at that moment completely free of charge.

According to Ben & Jerry's website, the event will be going on at Scoop Shops globally, which means that both kiosks and full-service Ben & Jerry's storefronts will be getting in on the unofficial holiday. I'd recommend entering your zip code in their free cone finder now so that you can start making an ice cream game plan for the day of April 9.

Once you find your closest participating location and figure out how you're getting there, all you have to do is head to Ben & Jerry's, pick the flavor of ice cream cone that's calling your name, and head back to whatever you need to do. Just one thing to keep in mind: Considering that Ben & Jerry's Free Cone Day has been almost an institution since it first debuted back in 1979 and the brand has a legit cult following, I'd make sure to set aside some time to wait in line for your free scoop.

IMHO, the hardest thing about this whole experience might be picking exactly what flavor you're going to want to go with. It's unclear exactly how many free cones you can get (according to Food & Wine, a Ben & Jerry's spokesperson told the publication that you're free to head back in line for another free cone if you want to), so there are quite a few different variations that you can do.

Per the publication, Ben & Jerry's classic Chocolate Chip Cookie Dough ice cream will be making its Free Cone Day debut for the very first time in addition to a non-dairy version for anyone with dietary restrictions. In addition, the company will be offering its lower-calorie, GMO-free line of Moo-Phoria ice creams if you want to treat yourself to a cone of Mocha Fudge Brownie, Cherry Garcia with a Twist, P.B. Marshmallow, and Chocolate Cookie EnlightenMint. I wouldn't be surprised if dairy-free options containing almond milk like Ben & Jerry's Cinnamon Buns and Peanut Butter Half Baked will also be in the lineup.

Again, we have less than 24 hours to go until the big event, so I'd do a little research tonight so that you're ready to go claim your free cone on Tuesday afternoon.