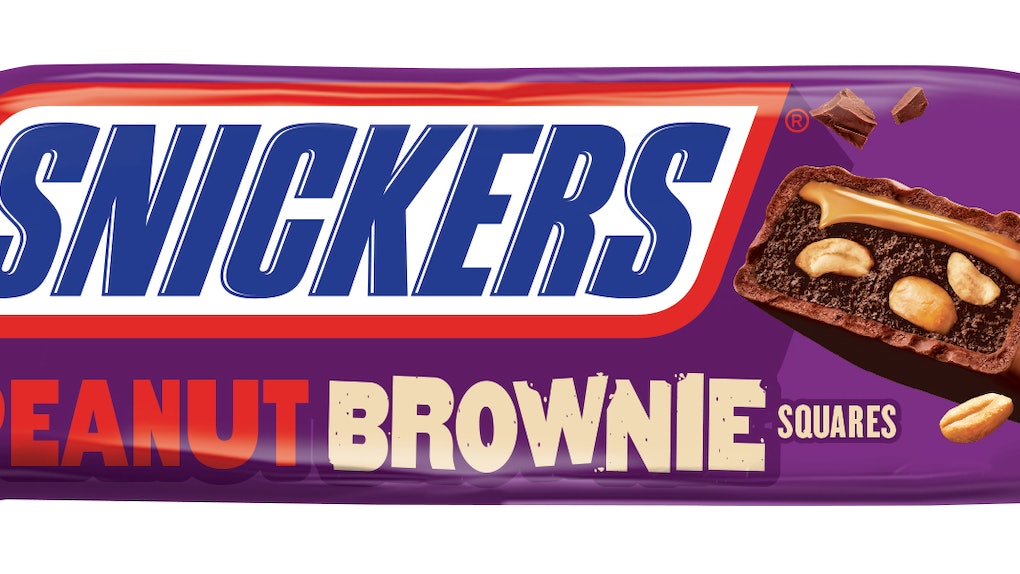 Snickers is launching a brand new candy, and you can get a taste before it officially arrives. The new flavor combines two classic sweets: a classic Snickers bar and brownies. If you can't wait to try one, here's how to get a Snickers Peanut Brownie bar before it officially hits store shelves.

Mars Wrigley announced the new Snickers Peanut Brownie bars in a Thursday, July 9 press release. The sweet bite is different from the OG Snickers bar in a couple ways. First, rather than unwrapping one whole candy bar, the Snickers Peanut Brownie package features two individual squares of the new candy. And of course, the addition of a brownie filling sets it apart from the original. The Snickers Peanut Brownie squares are made with a layer of caramel and a chewy peanut-brownie filling on the inside, and the classic Snickers chocolate coating on the outside. It's basically two desserts in one, and since the brownie is nice and chewy, it's like a getting a piece from the middle of the pan every single time (!!!).

Before the big news, Snickers teased the new candy on Twitter on Wednesday, July 8, writing, "Something satisfying is coming. Can you guess what?!"

The new bite won't be available in stores until January 2021, but Snickers is giving away 1,000 boxes for free this summer while supplies last. Each box contains five of the new Snickers Peanut Brownie candy bars. To enter to get the new bar early, visit SNICKERSBrownie.com and sign up for notifications.

Once you've signed up for notifications, you'll need to follow the countdown to the giveaway, which will end on Thursday, July 16. When it hits zero, the countdown ticker will disappear and the page will refresh. Then, you'll be able to claim your box by entering your email and a mailing address. You'll receive confirmation if you're one of the lucky 1,000 people getting the new candy bars or if you're too late, and the boxes have already been claimed. Those who do score a box will get the exclusive first taste once the boxes ship in September 2020.

If you aren't able to win a free box of the Snickers Peanut Brownie bars, you'll be able to purchase them nationwide beginning in January 2021. The candy bars will sell in a single 1.2-ounce bar, a 2.4-ounce share size, and a 6.61-ounce sharing stand up pouch size.