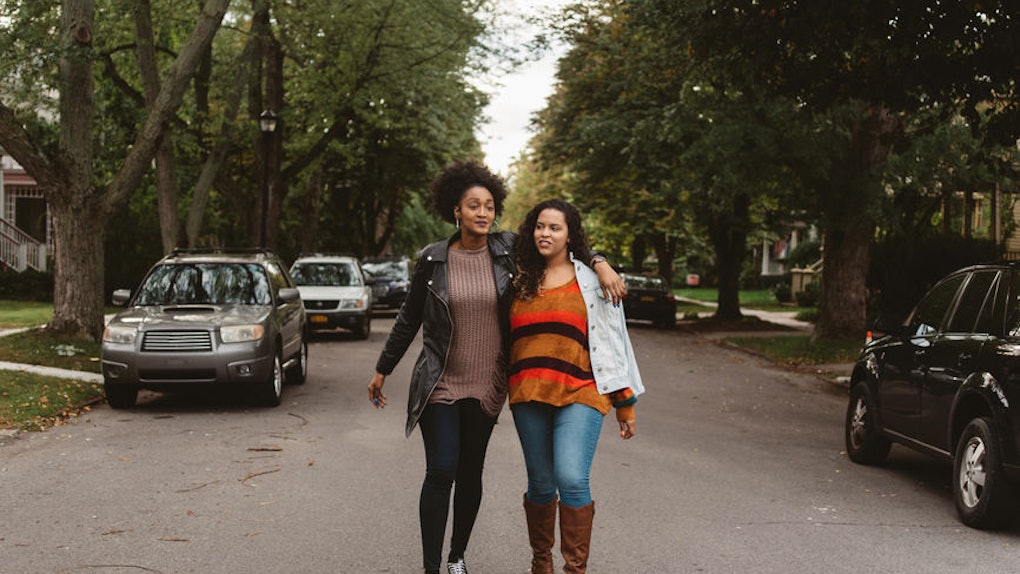 Here's How To Feel Confident In Conversations If You Tend To Cringe At Yourself, According To Experts

While I've always been a pretty social person, that doesn't mean I don't become profoundly awkward when trying to talk to people I don't know. In fact, in high school, whenever I tried talking to people I thought were "cool," my face would twitch uncontrollably, or I would start to giggle at random moments. It felt very, you know, the opposite of cool. So, for me, learning how to feel confident in conversations has been kind of a process. If this is something you relate to, well, the good news is, confidence is just a practice, and conversation skills are totally something that anyone and everyone can learn, at any stage in life.

"Confidence in conversations can come easily for some and can be difficult for others," Katie Zisk, a licensed marriage and family therapist and registered yoga therapist based in Connecticut, tells Elite Daily. In general, she explains, when it comes to improving your conversational skills, it's important to notice what it is you focus on when you go into a new social situation. If your main focus includes things like your insecurities, doubts, and flaws, says Zisk, that's probably why you're struggling.

"Focus your thoughts on the positive when a moment of low self-esteem passes in your mind," she suggests. For instance, even if you're worried about not having anything to say in the conversation, remind yourself of the little details that you do feel confident about. Like, maybe you feel really good about the outfit you're wearing, or perhaps you got a blowout yesterday and your hair still looks fire. At the very least, these little things will boost your confidence, and at most, they might even spark an idea in your head for a new topic to bring into the conversation.

The more you build your confidence, says Zisk, the more your body language, your posture, and even your tone of voice begin to reflect that self-assurance.

Feeling more secure in conversations, especially with new people, is also a matter of preparation, says Shainna Ali, a licensed mental health counselor and owner of Integrative Counseling Solutions. And no, that doesn't mean you have to plan out every single sentence or topic ahead of time — I mean, really, how could you possibly do that anyway? According to Ali, a realistic way to go about "preparing" for a conversation — whether it's going to take place in a networking environment with a bunch of different people, or even if you're just meeting an acquaintance you don't know very well for coffee — is to consider what you might not want to talk about, or what you know for sure you'll feel more stilted and uncomfortable discussing.

Like, have you ever been unemployed and then really dreaded talking about your "career" to new people? Or, to put it a different way, have you ever gone through a bad breakup and agonized about the possibility of dating coming up as a topic of conversation with someone? "Before waiting to be triggered in a given conversation, reflect prior," Ali tells Elite Daily. "This may include assessing if there is something particularly anxiety-provoking in the anticipated conversation, or giving yourself time to connect with your strengths."

The thing is, you can't necessarily prevent these awkward topics from coming up in conversation, but thinking ahead about what you could say, should these things come up, can help you feel more empowered to handle the whole thing smoothly, rather than frantically, in the moment, says Ali.

Of course, putting all of these tips into practice is much easier said than done. But, if it helps you feel any better, you're definitely not alone in assuming you're the most awkward human being to ever try to engage in a conversation with another person. Earlier this month, new research was presented at the Society for Personality and Social Psychology (SPSP) 20th Annual Convention that explored a "confidence gap" that people tend to have in conversations with others. According to a press release from the SPSP, researchers from Cornell University asked about 700 people "about their reactions to possible and actual conversations." Erica Boothby, of Cornell University, who presented the research at the convention, said in a statement, "We not only find that people report feeling under confident in their ability to engage in casual conversations, they also tend to attribute the worst moments of the conversations - awkward pauses, conversational missteps - to themselves as opposed to their conversation partner."

But in reality, Boothby explained, most people are experiencing that sense of insecurity, and in fact, "things are not as bad as they seem; people are very forgiving in conversations," per the SPSP press release.

In other words, cut yourself some slack, friend. Awkward lulls in conversation are simply part of life, and chances are, those moments aren't nearly as disastrous as you're making them out to be in your mind.