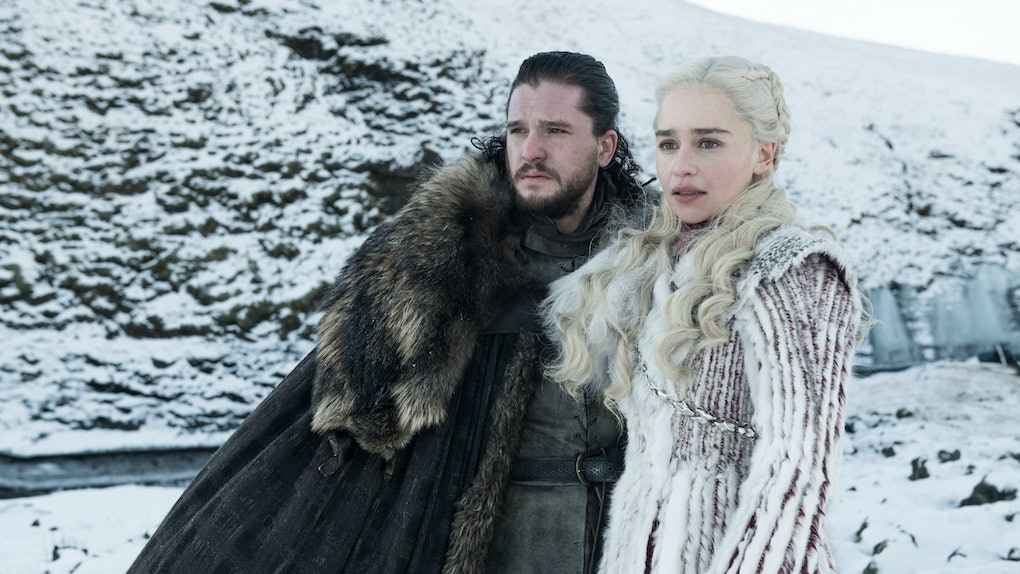 Here's How To Enter Emilia Clarke's 'GOT' Premiere Screening Contest

Game of Thrones Season 8 premieres in April, two months after Valentine's Day. But the world premiere of the first episode happens before then, in a red carpet event, usually to an audience of very carefully curated invitees, all of whom have to keep their mouths shut and not let out spoilers ahead of time. But at least one lucky set of guests will get to bypass this careful curation and go as Emilia Clarke's date to the show. Courtesy of Omaze, Emilia Clarke's Game of Thrones premiere screening contest is now officially on.

It's not the first time Game of Thrones has invited fans to the premiere for charity. The cast has been working with Omaze, which describes itself as "a fundraising platform that raffles once-in-a-lifetime experiences and exclusive merchandise in support of critical causes." The series has been giving away exclusive trips to the show's premiere for several seasons now and even did a "behind the scenes of Season 8" giveaway last year. Clarke also extended her work with Omaze to other projects, her film Last Christmas is also partnering with Omaze for charity.

Check out the video Clarke did to promote the trip to see the world premiere of the final season of Game of Thrones in New York.

Clarke is great at comedy, her last Omaze video for Game of Thrones was also a scream. Also, these are great questions. I would love the answer to "Who is Most Likely To Spoil The Ending."

As for the contest, the Omaze website says the winner will be a step above normal VIP status:

The end of Game of Thrones is almost here... and you’ll be one of the first to see how it all begins. But there’s even more. You’ll be with the one-and-only Khaleesi, Protector of the Realm, Mother of Dragons, Emilia Clarke! For one night only, but forever in your heart, you’ll be pinned as Emilia’s honorary Hand of the Queen. (That’s a step above VIP status!) You’ll walk the red carpet at the legendary Radio City Music Hall, see how the highly anticipated final season begins, share a toast with Emilia at the exclusive after-party and take countless selfies of this night to remember. Bending of the knee is optional—but still appreciated. We’ve got your flights (not on dragons) and hotel covered.

This year, the charity of Clarke's choice is the Charities Aid Foundation of America, and all proceeds will go to "helping young adults recover from the impact of major medical trauma." CAFA is a 501(c)(3) non-profit, you can learn more about what they do at this link.

There's just one small detail left out: What day the premiere happens. The website says "April," and Clarke states the winner will get to see it before anyone else. So anyone who is planning to win these tickets should clear their schedule, even if the premiere winds up being Saturday, April 13.

More like this
'House Of The Dragon': 'GOT' Spinoff Cast, Release Date, Filming News, & More
By Ani Bundel
Here's How To Enter Freeform's 'Cruel Summer' '90s Sweepstakes For Nostalgic Prizes
By Abby Monteil
This 'Stranger Things 4' Theory About Eleven's Past Is Super Dark
By Ani Bundel
Stay up to date