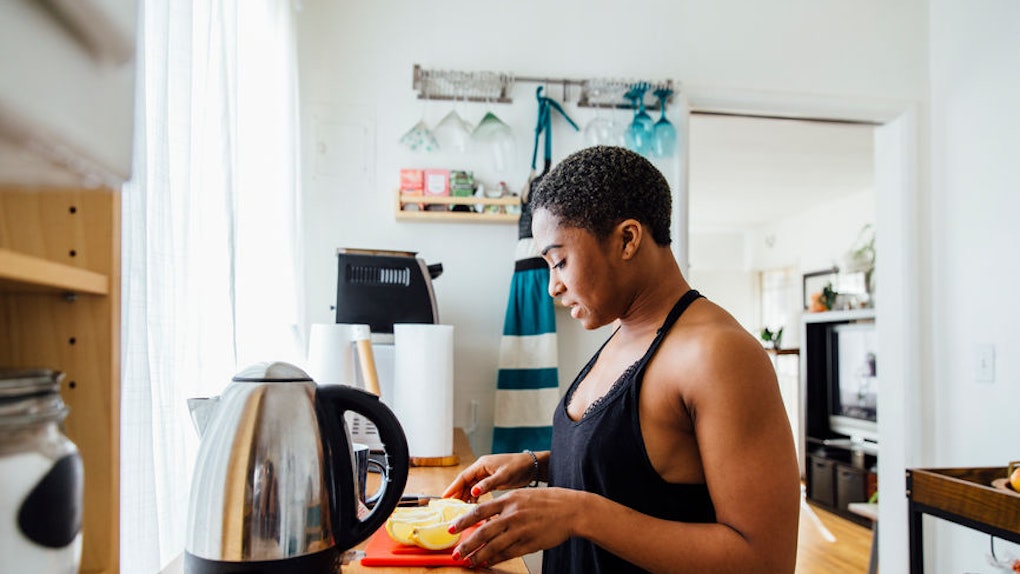 Here's How The Mediterranean Diet Benefits Your Workout & Boosts Your Performance, According To Science

You know that age-old saying “you are what you eat”? Evidently, so is your workout. TBH, when I initially came across new research suggesting that the Mediterranean diet can improve your workout routine, I wasn’t exactly floored. I mean, I’m all about a slice of avocado toast, or scooping a tablespoon of peanut butter straight out of the jar before hitting the gym, so I’ve been pretty on-par with the key components that make up the foundation of this way of eating from the get-go. However, there’s more to the Mediterranean diet than healthy fats and whole grains, and if you’re looking to boost your performance sprinting on the track, balling out on the court, or taking laps in the pool, snacking Mediterranean-style might be the way to do it.

Listen, I realize that the Mediterranean diet has become something of a buzz-term around the health and wellness space, but the benefits that this food program boasts are nothing to sneeze at. For instance, some of the health benefits of a Mediterranean diet include low cholesterol, as well as a lower risk of developing heart disease. What’s more, according to a review published in the journal Current Opinion in Clinical Nutrition & Metabolic Care, which analyzed the results of 19 studies exploring the long-term benefits of a Mediterranean diet, this way of eating might just help you tack on a few extra years to your life. If that doesn’t convince you to at least consider making the switch, then I don’t know what will.

Of course, I’m not here to sway you one way or another. If chowing down on a chicken caesar wrap before hopping on the treadmill gets you pumped, then by all means, do you. I am, however, here to relay the facts, and according to new research, the fact is, a Mediterranean diet can improve your endurance exercise performance.

These findings come as the result of a small study performed by researchers from Saint Louis University (SLU), who compared the performance of 5K runners following a Mediterranean diet to 5K runners who followed a traditional Western diet. Now, to clarify, a Mediterranean diet, for those of you who might not know, is comprised of an abundance of fruits, vegetables, nuts, whole grains, and olive oil. A traditional Western diet is pretty much the opposite, in that fruit and veggie portions are pretty low, while processed meats, dairy, processed sugars, and high saturated fats are the main focus. Knowing that, the results of this study may not come as such a big surprise.

For their study, researchers recruited seven women and four men in their mid-20s and early 30s, who were instructed to follow a Mediterranean or Western diet, per SLU’s press release. After four days on each diet, the group ran five kilometers on the treadmill. They were then given a nine- to 16-day rest period before switching to the opposite diet for another four days, and racing for a second time. According to the study's results, which have been published in the Journal of the American College of Nutrition, those who followed a Mediterranean diet ran 6 percent faster than those on a Western diet.

Edward Weiss, Ph.D., professor of nutrition and dietetics at SLU and senior researcher for the study, said in a statement for the study's press release that, because many of the individual nutrients in the Mediterranean diet have been shown to “improve exercise performance immediately or within a few days,” it makes sense that adhering to the diet as a whole would also be “quick to improve performance.” However, Weiss added that these benefits were also “quickly lost when switching to the Western diet, highlighting the importance of long-term adherence to the Mediterranean diet.”

So, to clarify, according to the American Heart Association, endurance exercise, otherwise known as aerobic exercise, refers to “activities that increase your breathing and heart rate such as walking, jogging, swimming, and biking.” Anaerobic exercise, per Healthline, is a “higher intensity, higher power version of exercise,” and includes activities like jump-roping, weightlifting, high-intensity interval training (HIIT), and sprinting. Per SLU’s press release, a Mediterranean diet was shown to boost a person’s endurance exercise performance; they found “no difference between the two diets in performance in anaerobic exercise tests.”

Now, I know myself, and I definitely feel more energized to work out when I’ve loaded up on fruits and veggies, and just foods in general that aren’t as heavy on my stomach (ahem, meats and dairy). According to Alesandra Woolley, executive editor of Mattress Advisor, that difference in energy all comes down to the carbohydrates you're putting into your body. She tells Elite Daily over email that, rather than energize you, simple carbs, such as dairy, processed breads, as well as foods high in sugars (which are all typically found in a Western diet), actually have the opposite effect — i.e. they often cause you to feel sluggish. Complex carbs and lean proteins found in a Mediterranean diet, on the other hand, can offer the energy you need to sustain quality performance throughout your workouts.

So, should you hop on the Mediterranean train? It really depends on your goals. As always, though, make sure to check in with your doctor before making any significant changes to your diet, because what's right for these athletes may not make sense for your body (though, a few extra greens here and there certainly can't hurt).

More like this
25 Instagram Captions For Workout Pics & Being A #Boss In The Studio
By Marisa Casciano
These Creative #EcoHacks On TikTok Encourage Green & Waste-Free Living
By Marisa Casciano
I Tried Singing While Running Like Miley Cyrus & OMG, My Lungs
By Rachel Varina
Stay up to date