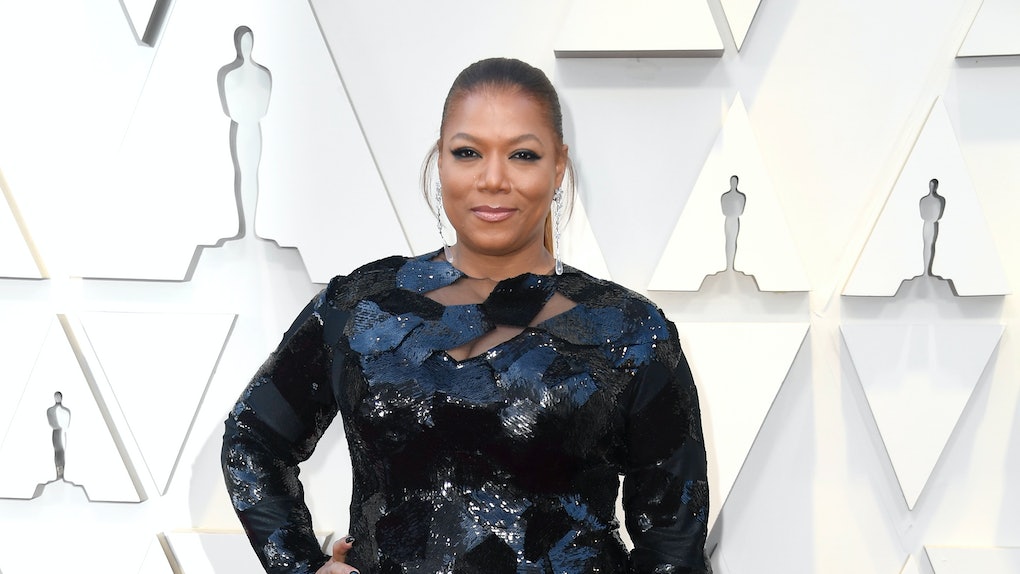 Here's How Queen Latifah Stays Balanced, No Matter What Chaos Is In Her Kingdom — EXCLUSIVE

Never in my whole career have I been so stressed prior to an interview than when I step into the Eventi Hotel in New York on a windy Tuesday afternoon. It's an hour before I'm scheduled to meet Queen Latifah, and I'm fiddling with my GPS when, all of a sudden, my phone goes black from a freakish malfunction. My battery slips from 70 percent charged, to a mere 10 percent in seconds, and the only recording device I have is my phone. Luckily, I'm sitting down with the actress to get the scoop on how Queen Latifah stays balanced when life gets overwhelmingly hectic — a subject matter I clearly need a few pointers on as my heart pounds against the walls of my chest.

As an award-winning actress, producer, rapper, and songwriter, Queen Latifah knows chaos. “All kinds of things can stress you out: business, money, relationship things, work, things going on at work, or how much work you have to do,” she tells me in an exclusive interview for Elite Daily. As Queen Latifah sits across from me, I can't help but notice how cool, calm, and collected she looks. Meanwhile, my palms are shaking, and my eyes keep darting from hers to my questionable phone battery. How I'm able to keep my voice composed, I'll never know.

“Worry about today, and that will be enough,” she adds, speaking like the true Queen she is.

Queen Latifah recently teamed up with Cigna for the global health service company's latest campaign, which encourages everyone to take control of their physical and emotional health by looking at the body, mind, and spirit as a whole. “The idea of doing a campaign based on promoting health — body and mind, body and emotionally — is important, and I’ve always been for that,” Queen Latifah says of how her partnership with Cigna came to be. “It’s better if [your doctors] get the whole picture, and that starts with you communicating with your doctor and really having those annual check-ups.”

Going to the doctor when you’re feeling physically under the weather is important, but through this Cigna initiative, Queen Latifah, Nick Jonas, and Ted Danson are sharing the message that scheduling a visit when you’re feeling emotionally unwell can be just as beneficial. “[People will] go to the doctor, go through the motions, and not say a word about how they’ve been feeling emotionally,” Queen Latifah explains. “But it’s all linked together, and doctors are trained to catch things based on how you’re feeling.”

As important as it is to have resources, like a doctor, to turn to when you're feeling stressed, it can also be beneficial to know what sorts of activities and rituals help you cope through the chaos. For reference, here's how the Queen handles things when life gets hectic.

Feeling anxious? Dropping into a yummy child's pose or rocking back and forth in happy baby might just help you simmer down.

When I ask Queen Latifah what sorts of physical activities she likes to do when life gets a little chaotic, the first to come to mind for the performer is yoga. "I don’t get to do yoga as much as I would like to, but I would do yoga every day if I could," she tells me.

"If you were to read someone’s numbers before a yoga class, and after they took one, you would find such a difference in their heartbeat, their blood pressure would be better, if you were to talk to them they’d probably seem more calm," she continues.

Of course, Queen Latifah isn't a doctor or a yoga instructor (at least, to my knowledge), but she isn't wrong. Plenty of research, such as this review published in the medical journal Evidence-Based Complementary and Alternative Medicine, has shown that practicing yoga can improve both your physical and mental health, as it can help you separate yourself from stressful situations, allowing you to assess the cards that you've been dealt with a level head. It can also teach you how to regulate your breath, and simply become one with your body and mind so that you can better identify when something is wrong mentally, as well as physically.

Per a recent study from the University of Alabama at Birmingham, spending just 20 minutes surrounded by nature can make you feel happier. Who knew, right? So if you're feeling particularly stressed, excusing yourself from the office for a few to soak up some sun might be really beneficial. Even Queen Latifah thinks so.

"[When I walk], I get to feel the elements on my skin, hear the sounds, see things," she tells Elite Daily. "I don’t have time to really think about problems or issues. All I have time to do is breathe, and put one foot in front of the other, and that kind of removes everything."

Get A Good Night's Sleep

Personally, a good night's rest always makes me feel better when I'm stressed out, and evidently, sleep is pretty high on Queen Latifah's list of de-stressors, too.

"It’s nice to get a good, full night’s sleep where you wake up feeling rejuvenated, rested, your body feels like it was able to reset while you were sleeping and that’s important," she tells Elite Daily. As for how many hours this Queen needs to clock in, eight to nine hours is her sweet spot.

Unfortunately, stress can actually hinder your sleep cycle, so it's really important to not just get enough sleep, but to also create a soothing routine before bed to get the most out of those eight to nine hours. In a recent interview with Elite Daily, Patricia Karpas, co-founder of Meditation Studio and head of content for Muse, suggested trying Meditation Studio's Deep Sleep Collection, which features guided meditations like Deep Slumber, Bedtime Harmony, Deep Body Relaxation, and Surrender to Sleep to help listeners “release tension, reduce stress, and ease into a peaceful slumber by letting go of the day.”

Stay In The Present Moment

I recently came across a quote that went something like, "No amount of guilt can change the past, and no amount of anxiety can change the future." Wise AF, right? Well, during my chat with Queen Latifah, she also made a great point that you probably have enough on your plate in the present moment, so why stress about what's going to happen two days, or even two weeks from now?

"For me, it’s best when I take things one step at a time, one moment at a time, and not try to worry about what’s happening next week," she tells Elite Daily. "Really stay in the moment, stay in today, deal with today’s issues. Wait until next week to worry about next week."

Accept That Stress Happens, But You'll Get Through It

At the end of the day, stress is just one of those things that everyone experiences at some point in their lives. But you know what they say: You wouldn't appreciate the good times without some hard times sprinkled into the mix. You just have to remember that stress is temporary; tomorrow is a new day, and you have the opportunity to make it a good one.

"I think the most important thing is to be prepared all the time," Queen Latifah tells me. If you take care of yourself, she adds, you'll be ready when those times happen.

"There will always be peaks and valleys," she says. "You have to balance it back out and just know that you’re going to hit those little valleys sometimes, but they all lead to peaks again."