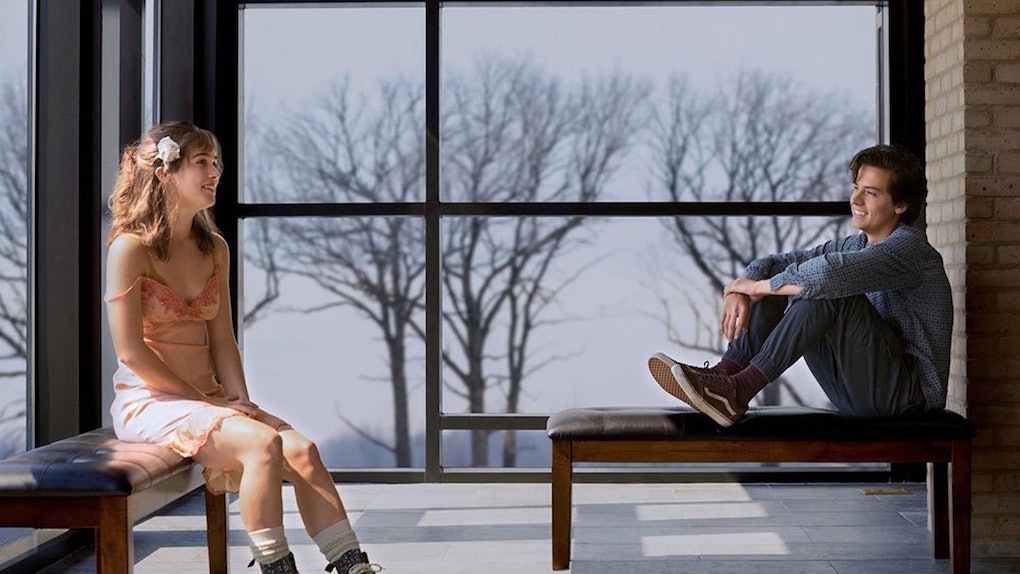 It is not easy to portray a convincing and passionate romantic relationship when you cannot get within six feet of your love interest, but that is exactly what Haley Lu Richardson and Cole Sprouse had to do in their new movie Five Feet Apart. The film stars Richardson and Sprouse as two cystic fibrosis patients who are forced to remain six feet apart at all times or risk death. Despite the distance, Haley Lu Richardson and Cole Sprouse created chemistry in Five Feet Apart that is truly undeniable. Ahead of the film's premiere, Richardson revealed to Elite Daily how that bond came to be so strong.

In Five Feet Apart, Haley Lu Richardson stars as Stella, a young woman who is diligent about her routine of medications and treatments for her cystic fibrosis. But her methodical lifestyle is challenged when she meets Will (Cole Sprouse), another CF patient who rebels against the rules. The new release marks Sprouse's first lead role in a major motion picture in a decade — the child star quit acting for a number of years and only recently returned to star in Riverdale. As this was Sprouse's return to the big screen, Richardson remarked that he was very committed to portraying Will with care. She said that the key to how well their chemistry came off in the movie boiled down to the fact that both she and Sprouse just truly cared so much about these characters.

"I really like Cole, and he really cares about what he’s doing. Whether he’s acting or taking pictures, like he’s a really artistic guy, and he cares a lot. He really is a thoughtful person and a caring actor," she gushes. "It would suck if I showed up and met the guy I was working with and he was like 'Oh, I’ll just phone it in, that’ll be easy, we don’t have to talk about that.' But Cole was wanting to go through everything and make it just as lived-in and grounded as possible with this relationship and these characters. And I went into it the same way because I care about what I do for a living. So I think we both just cared, we both gave a sh*t. That gave us the room to make it as real as we possibly could."

And Five Feet Apart is not only Cole Sprouse's big comeback; it also marks the directorial debut for Jane the Virgin star Justin Baldoni, who was actually instrumental in Haley Lu Richardson's casting in the movie. Richardson noted that she had been friends with Baldoni for years, since her fiancé Brett Dier co-stars with Baldoni on Jane the Virgin, and Baldoni would often mention that Richardson would be perfect for the lead role in the movie he was developing.

Surprisingly, though, Richardson actually passed on Five Feet Apart initially, admitting that she was looking to do a more bare-bones, stripped-down drama at the time, having been inspired by her 2017 film Columbus. But after meeting up with Justin Baldoni one last time to go over her hesitations with the film, Richardson said that he excited her to say yes to Five Feet Apart.

After taking the role, Richardson's next step was to do in-depth research on cystic fibrosis. The most helpful part of this process was meeting up with cystic fibrosis activist, author, and motivational speaker Claire Wineland. Sadly, Wineland died of a stroke in September of 2018, so she was unable to see the finished product of Five Feet Apart, but Richardson pointed out that the most memorable thing Wineland shared with her is actually in the movie as a line. "She said to me, 'When you have CF, you’re either the type of person who lives for your treatments, or who does your treatment so you can live your life. And if you’re the kind of person who lives for your treatment, there’s going to be a time in your life before you die where you wake up and it hits you, ‘What have I been doing with my life? I’ve been living for these medications when I should be taking those to go and enjoy my life, live the most out of my life.' I was so struck by that, and we ended up making it a line in the movie at a pivotal moment. And I think it’s the best line in the movie."

So listen for that line when you go see Five Feet Apart if you want to cry even harder than you would have before knowing that story. The new movie premieres on Friday, March 15.

More like this
These Throwback Jennifer Lopez Movies Are Such A Blast From The Past
By Ani Bundel
'Knives Out 2': Release Date, Cast, Trailer, Plot, & More
By Ani Bundel
Why Won't NBC Air The Golden Globes In 2022? Let's Break Down The Drama
By Ani Bundel
Stay up to date