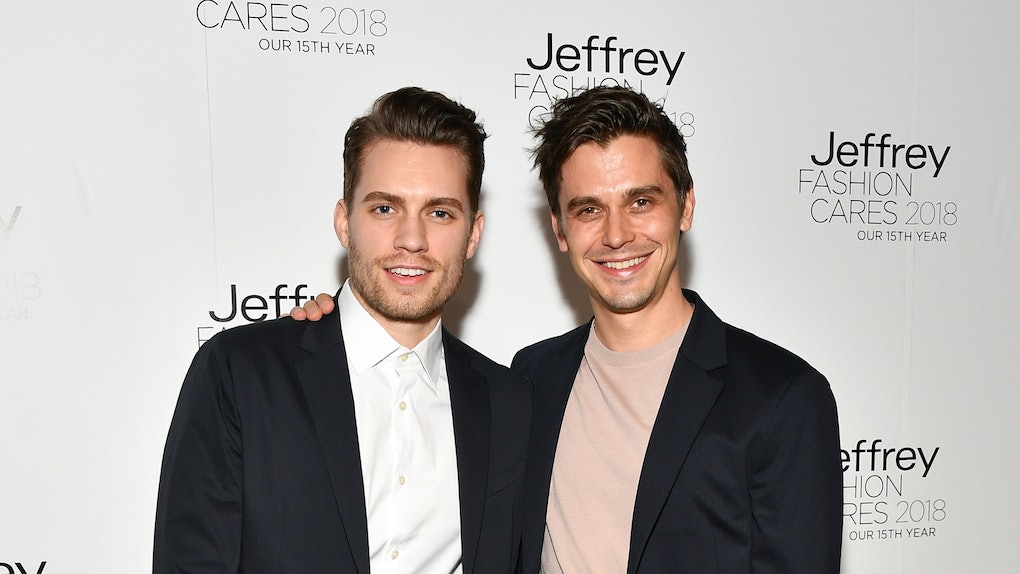 Ever since the new Queer Eye premiered, there's been a brewing conspiracy theory: Can food and wine expert Antoni actually cook? Are his recipes for each episode simple because he's working with folks who are inexperienced in the kitchen, or is there something more nefarious happening? Personally, I believe the former. Sure, he's adorable but he can cook, too. And regardless of where you come down on this, there is one recipe that Antoni has mastered, and that's the recipe for a goals-worthy romance. Don't believe me? Just take a look at everything Antoni Porowski and Joey Krietemeyer have said about each other, because these long-time partners have love on lock.

Like most of the cast of Queer Eye, Porowski is not hiding his relationship from the public (and why should he?), but he isn't spilling all the details either. So here's what we do know about his boyfriend of seven years — to whom Porowski says he's "practically married" to.

While Krietemeyer may have model-worthy good looks, he is actually more of the artistic type. According to his LinkedIn, Krietemeyer graduated from Drexel University with a Bachelor's degree in graphic design. This led to his current gig as the director of creative services at 1stdibs — AKA that incredible luxury vintage marketplace I can't afford. Krietemeyer is also proud to be Porowski's number one fan and happily gushes over his success — and the feeling is clearly mutual. Just take a look at all the things they've said about and to one another.

Krietemeyer helped inspire Porowski to follow his passion for food.

If watching Porowski on Queer Eye gives you life then, first of all, same, but you also have Krietemeyer to partially thank. According to Porowski, it was his boyfriend who helped encourage him to pursue his career in the food industry. In an interview with Grub Street, Porowski said, “I have two people in my life — my best friend, P.J., and my boyfriend, Joey — who have always told me that I should pursue food in a more professional capacity.”

Porowski’s relationship with Krietemeyer helped him come out to his father.

In the second season of Queer Eye, Porowski briefly describes coming out to his father. In the episode, he mentions that his father sent him a message about how Porowski lived a “discreet life,” which in turn led to him coming out. In a subsequent interview with GQ, Porowski elaborated on the story and how his relationship with Krietemeyer featured in it.

I never really had a coming out. It was edited into the show saying I texted my father saying, "I'm gay, it's okay." That's a very short version of how it actually came about. He made a comment driving me to the airport that I certainly lead a very discreet life. I'm on the plane on the tarmac like, "Well, if the plane crashes, I'm going to die and he's never going to know."

I decided to send him an email. Because I was living with Joey, my boyfriend now, I wrote my father a very short email: "You brought this up. I think it's time I tell you: I love. I am loved. His name is Joey, and we live together." That was it.

Krietemeyer is so proud of his man.

If you’re wondering how Krietemeyer feels about his partner’s success, well, he’s more than happy to tell you. Before the premiere of the first season of Queer Eye, before we’d even had a chance to fall in love with Porowski, Krietemeyer took to Instagram to say: “So extremely proud and excited for you @antoni!! I love you and can't wait for the world to experience you the way I'm able to every day.” Ugh. I love.

No, really, Krietemeyer is SO proud of his man.

His pre-season declaration wasn’t the only time Krietemeyer took to Instagram to share how he feels about Porowski. The day after the first season premiere, he again used Instagram to let the world know that it’s “Always an honor to walk next to this one 😍” Aww!

Porowski is his favorite person.

If there is any lingering doubt about how authentic this couple's love is, Krietemeyer keeps it short and sweet with this romantic message on his boo’s birthday. "Happy Birthday to my favorite person in the world @aporowski"

Yep, this gorgeous and talented couple is pretty much the definition of goals.