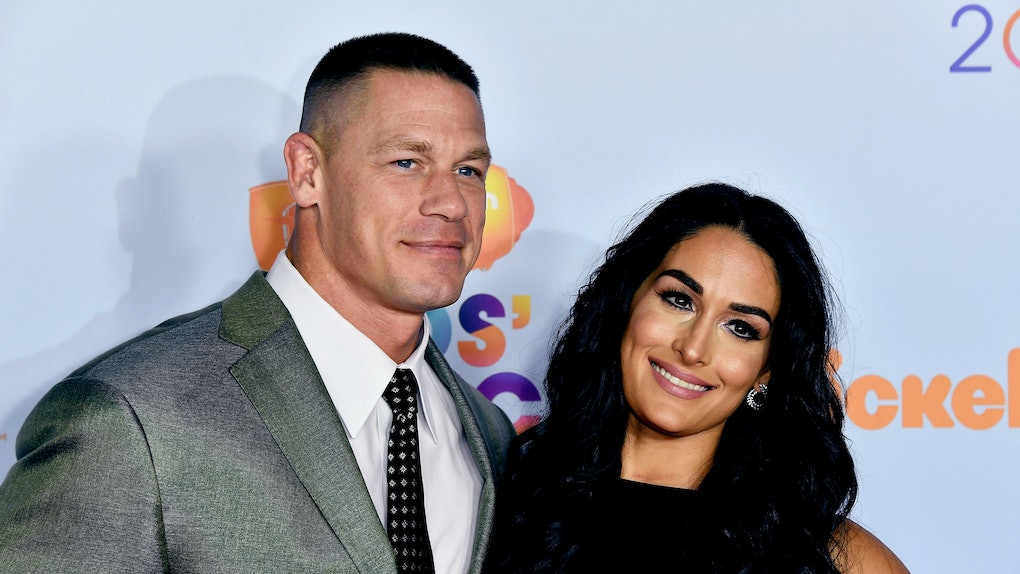 Here’s Everyone John Cena & Nikki Bella Have Ever Dated, Because I'm Still Not Over Them

Well, it’s official. John Cena and Nikki Bella are "just friends." After weeks of speculation that the couple had secretly reunited and were maybe even planning to elope, Bella finally confirmed that they're not actually back together at the moment on her YouTube. If, like me, you are rooting for this couple to make it, the news is pretty hard to hear. At least they seem to be leaving the door open for the future. Since past is prologue, I decided to take a look back at everyone John Cena and Nikki Bella have dated to see if it’s possible to get some hints about their potential future — plus, I was just straight-up curious.

What I learned while researching their respective romantic backgrounds is that it turns out they both have a somewhat similar dating history, which may have led to them getting together. For example, they both dated fellow wrestlers and they both married and eventually divorced their high school sweethearts. Crazy, right? While Cena has been rumored to have been linked to more women over the years, here is a rundown of all the people each of them has been confirmed to have had a relationship with over the years.

Cena and Elizabeth Huberdeau were high school sweethearts. The couple dated for six years and then married in 2009 — but three years later, they filed for divorce. That’s when things got a bit ugly. Cena blamed the dissolution of his marriage on focusing too much on his career. In an interview on the hit105 radio show Stay, Abby & Matt, Cena said, "I have made [WWE] my absolute life," adding, "I don't have a family ... I tried marriage once and I realized my WWE marriage was the one that was going to survive.” Huberdeau had a different story for why the marriage was doomed: Cena’s alleged infidelity with "multiple women."

Cena and Mickie James' hookup was #drama. The two were allegedly having an affair while Cena was in a relationship with Huberdeau and James was dating Kenn Doane, aka Kenny Dykstra. According to Doane, he discovered the infidelity when he saw that James had been searching for rumors of their affair online. "She was googling mickie james and john cena dating. I asked why, she broke down crying. Then I heard more from others. She was checking to see if it was on the net yet," Doane tweeted.

It only gets more problematic from there. It's alleged that Doane and later James — after the relationship with Cena ended — were transferred out of their jobs on Raw in order to protect Cena’s image. Yikes.

Cena had one more short-lived relationship with a fellow wrestler, but fortunately this one is far less dramatic. In 2002, Cena was linked to Lisa Marie Varon for about a month. At the time, Varon was married but separated from her husband.

Had the couple married back in May, it would have been Bella’s second trip down the aisle, too. Her first husband was her high school sweetheart. However, unlike Cena, whose first marriage was very public, we actually have no idea what Bella’s first husband's name is. In fact, she even kept the marriage a secret from Cena until she revealed the story to him on an episode of Total Divas in 2014.

We may not know Bella’s ex’s name, but here’s what we do know. The couple got married when Bella was 20 years old, in Las Vegas, by an Elvis impersonator. She even walked down the aisle in Uggs! Not exactly your traditional ceremony, which seemed to have set the tone for the relationship, as the couple never lived together and divorced three years later once they had both started dating other people.

Cena was not the first wrestler to win Bella's heart; that title goes to Nicholas Nemeth, aka Dolph Ziggler. While the exact timeline of the relationship is unclear, the estimates are that the two dated from 2008 to 2010. It’s also rumored that Nemeth still has feelings for Bella, and there are some fans who hope the split with Cena will lead to her reuniting with Nemeth.

Sorry, Nemeth/Bella shippers, I wouldn't hold my breath for that. While Bella and Cena are currently in the friend zone, there is still plenty of reason to hope for a reconciliation. But don't take my word for it. During the same video in which Bella explains they are currently friends, she also had this to say:

We are both working on each other and trying to work on us... we talk every day. He is not only my best friend, but he truly is one of the most amazing people I have ever met. And he has patience with me, and has really taught me a lot over the past few months. I think one of those things is an inner strength that I thought I had, but didn't realize how strong I had it. I don't know, I do have hope for us.