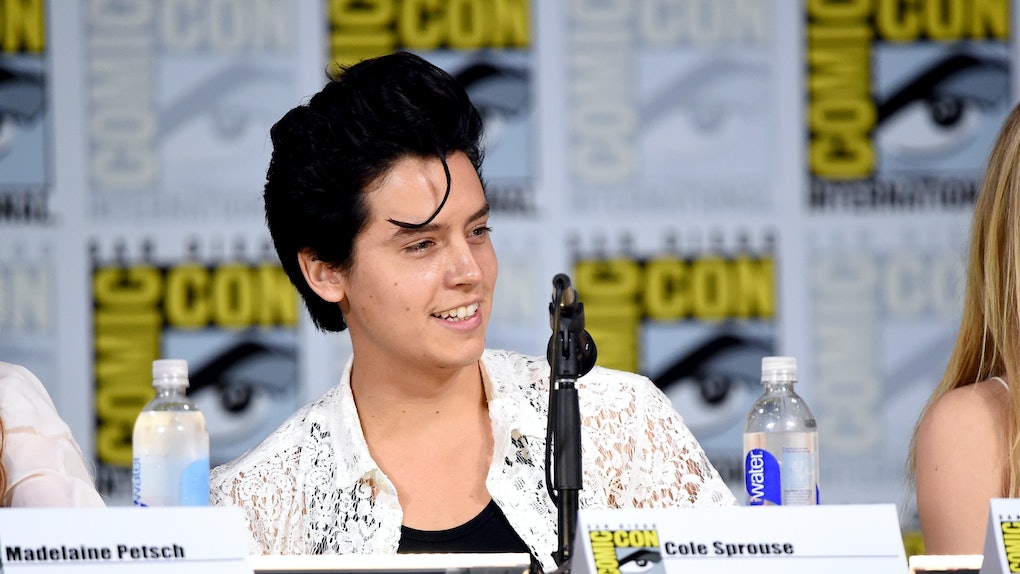 Here's Everyone Cole Sprouse Has Ever Dated, & He Definitely Has A Type

From Big Daddy to Friends to The Suite Life of Zack & Cody and The Suite Life On Deck, the Sprouse twins were all over your TV screens in the mid-to-late ‘00s. They stepped out of the limelight for a bit after their Disney Channel days, but now, Cole Sprouse is back playing Jughead on Riverdale — and fans are curious about his personal life, especially his love life. Here’s everyone Cole Sprouse has ever dated, and it seems he totally has a type: costars.

Of the nine women Sprouse has dated (both rumored and confirmed), seven of them have been his costars — and it makes sense. When you're the star of a TV show, you spend a lot of time with your fellow actors, and that can make it easier to develop real feelings for them. Five of Sprouse’s rumored girlfriends were on The Suite Life at one point or another, one of them was a fellow Disney Channel star, and his current, confirmed girlfriend, Lili Reinhart, plays his Riverdale love interest, Betty Cooper.

Here's a look Sprouse's past and present relationships.

Do you remember the iconic Suite Life Of Zack & Cody episode where Cody accidentally enters a beauty pageant after following Rebecca, a girl who piquedhis interest, into the dressing room? And during his time in the pageant, he becomes best friends with her? And then he drops out, so she could win?Of course you do! Well, Rebecca was played by Victoria Justice, and she thanked him with a kiss for his efforts. This was apparently Justice's first kiss, and the two reportedly dated for a while after that 2005 episode. Elite Daily reached out to Sprouse's team for confirmation of the rumored relationship, but did not hear back.

Stoner was in so many projects in the early 2000s, including Cheaper By The Dozen, Step Up, Camp Rock, and The Suite Life. Shortly after Justice and Sprouse were rumored to be dating, Sprouse called Stoner his girlfriend in an interview with Access Hollywood. Sprouse’s team didn’t return a request for comment on the reported relationship. Years later, in 2016, Stoner briefly talked about her relationship with Sprouse on The Night Time Show. She said, "The first boy, I guess, that I had, like, a crush on and dated was Cole Sprouse." She admitted to feeling insecure when they were dating because of Sprouse's previous connection to Justice. Stoner also opened up about how Sprouse apparently broke up with her on her birthday. "He just said, 'It's not going to work out.'" Ouch.

And that brings us to yet another Suite Life costar Sprouse reportedly dated: Sophie Oda, who played the recurring role of Barbara Brownstein. Sprouse’s team didn’t return a request for comment on the reported relationship. In the show, Barbara and Cody dated in a few episodes until she dumped him for another one of their friends, Bob. Oda and Sprouse's relationship, like Barbara and Cody's, was seemingly short-lived. The two reportedly only dated for a month, according to J-14.

According to Heightline, Sprouse and Pippy were rumored to have dated back in 2009 after meeting on the set of The Suite Life. Elite Daily reached out to Sprouse's team for comment on the reported relationship, but did not hear back. Pippy played the daughter of a French ambassador who Zack and Cody were both trying to woo, only to lose to Bob, again. That damn Bob.

While it's not confirmed Sprouse dated Camilla or Rebecca Rosso, Heightline reports he apparently hooked up with one of them after they starred on The Suite Life. Sprouse’s team didn’t return a request for comment on the reported relationship. The English twins were recurring characters in the show, and also made a special appearance on The Suite Life On Deck.

Sprouse and fashion designer ErinBarr apparently dated from 2007 to 2008, Heightline reports. Elite Daily reached out to Sprouse's team for confirmation on this reported relationship, but did not hear back. Not much else is known about the rumored couple. Fun fact: Barr's designs have been featured on New York Fashion Week runways.

Maiaira Walsh and Sprouse apparently hooked up sometime around 2009, but not much else is known about the two. Sprouse’s team didn’t return a request for comment on the reported relationship. The actress starred in Cory in the House and was rumored to have dated multiple Disney Channel stars, such as Jason Dolley, Corbin Bleu, and Kyle Massey, Married Wiki reports.

For a brief time, the twins took a break from acting to attend NYU. While in college, Cole reportedly dated Bree Morgan, according to Popsugar. Sprouse’s team didn’t return a request for comment on the reported relationship. Morgan wasn't in the spotlight, but she and Sprouse apparently dated for two years (from 2013 to 2015). During that time, Sprouse posted quite a few pictures of and with Morgan on his Instagram.

Lastly, Sprouse's current partner, Lili Reinhart — aka the Elizabeth "Betty" Cooper to his Jughead Jones. Rumors about Reinhart and Sprouse dating circled the web for months, though neither confirmed it until the 2018 Met Gala. The rumors began when they were spotted cozying up to each other during ComicCon in July 2017, People reports. The two became friends when they first met on the set of Riverdale in 2016. It seems their actual relationship developed as their characters got closer on the show.

It seems like Reinhart has also become quite the muse for Sprouse's photography. His account is filled with incredibly beautiful pictures of her. The pair was rumored to have split in July 2019, but they never confirmed the reports and were seen looking happy together shortly after.

This article was originally published on Sep. 4, 2018