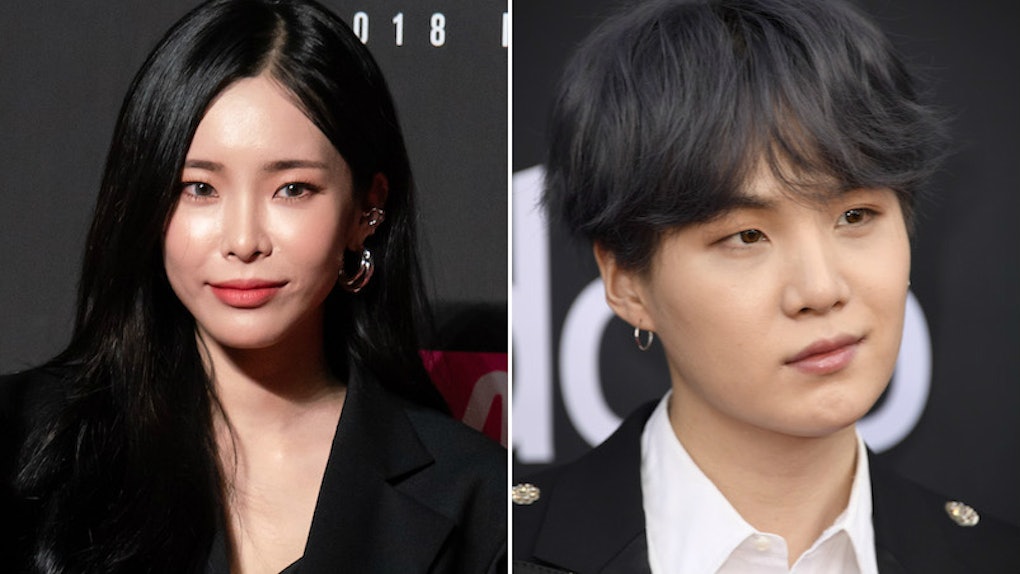 Heize & BTS’ Suga's "We Don't Talk Together" Is Such A Bop, Surprising Nobody

ARMYs feel like they died and went to K-pop heaven. That's because K-Pop soloist Heize just collaborated with BTS' Suga and their creation is a masterpiece. Just when you think BTS can't reach any further into the corners of fandom universe, they go and do an artist-crossover like this and it's better than anyone could ever imagine. Heize and BTS' Suga's "We Don't Talk Together" is another certified bop. The song dropped on July 7, and Haize fans and the BTS ARMY can barely contain themselves.

According to Heize's label Studio Blu, Suga acted as a producer and lyricist for the track. On June 27, Studio Blu released a statement that said, "Heize will be releasing a new digital single 'We Don't Talk Together' on July 7. The single was produced by BTS's SUGA and composed by SUGA, Heize, and El Capitxn, with lyrics by SUGA and Heize." It is theorized both Studio Blu and Big Hit Entertainment had staff that came up with the idea. Naturally, my brain goes to something like, "Actually, true love and the universe invented the collaboration first and fate made it so," but who am I to start fan-conspiracy theories?

Heize revealed a dreamy teaser image for the track which featured her laying in a field in a stunning red dress looking up at the sky. Her hair is decked out in a boho chic braid and the text is stamped across the sky in '70s-inspired geographic typography. On her stomach rests a tiny little white bunny with red eyes that match her ensemble. It's all so sigh-inducing.

Naturally, the song and its music video are even better.

The song is all about two ex-lovers meeting and realizing they want to be together, but they can't admit it, so they must confront the end of their relationship. The video goes along with the theme of the song perfectly, as Heize is seen going on dates with a skeleton. AKA, she's literally holding on to a dead relationship.

I always find it so fascinating when solo artists collaborate with one BTS member. For example, I wonder what drew Heize and Suga together? Objectively, their idol personas are conflicting. For example, In German, "heize" is translated into "heating," or "make something hot." Y'know, like cinnamon. (I think you guys see where I'm going with this.) Suga or sugar, on the other hand, is very sweet. Perhaps this is why these two artists go so well together. Sweet and spicy. Cool and hot. Both delicious.

Suga has collaborated on producing songs with several artists already in the past, including "Eternal Sunshine" with the hip hop group, Epik High, and the slow, thoughtful jam "Song Request" with accomplished soloist Lee Sora. Every song, which span across so many different genres, ends up being a smash hit, which really goes to show Suga's deep love and understanding of so many types of music, as well as his talent as a producer.

Regardless of whatever brought him and Heize together, ARMYs and K-pop fans are glad it did.

More like this
This Theory About The Songs In BTS' "Butter" Concept Videos Will Blow ARMYs' Minds
By Michele Mendez
RM & eAeon's "Don't" Lyrics In English Are An Emotional Rollercoaster Ride
By Michele Mendez
Is Olivia Rodrigo's "Good 4 U" About Joshua Bassett? Fans Are Convinced
By Michele Mendez
Stay up to date