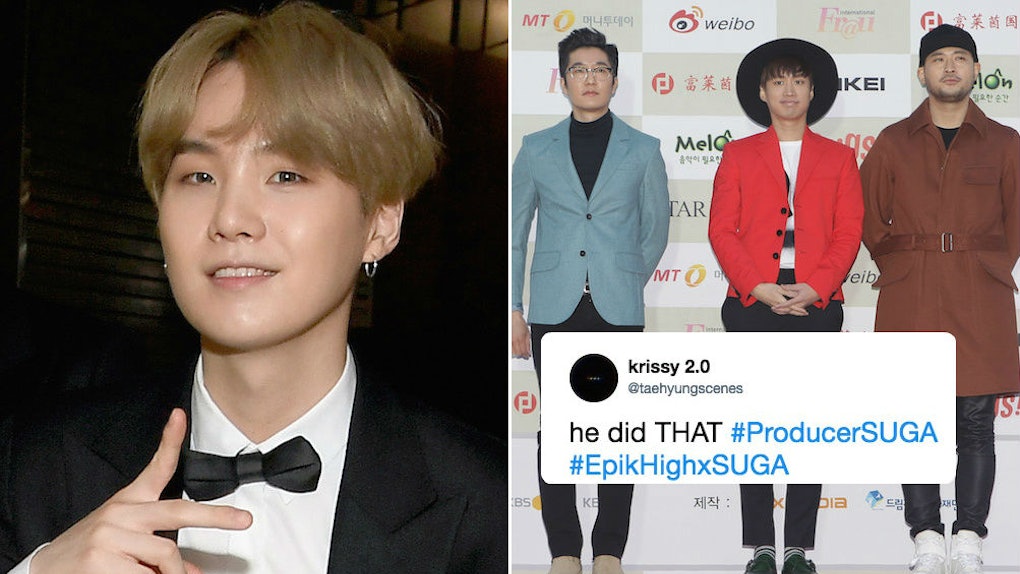 What Do Epik High & BTS' Suga's "Eternal Sunshine" Lyrics Mean? They're So, So Relatable

Suga is showing off some solo work once again — this time, as a producer. One of BTS' three rappers, Suga served produced a track on Epik High's new EP Sleepless in _______. The track's English title is "Eternal Sunshine." Epik High is a popular Korean hip-hop group that inspired Suga to get into hip hop in the first place, so this collaboration is kind of a big deal for ARMY. So what do Epik High and BTS' Suga's "Eternal Sunshine" lyrics mean? According to the song's translation, it's a song all about living with the pressure of trying to succeed and the anxiety that comes with it.

Suga is part of one of the world's biggest music groups, so I'm sure he knows a little bit about the anxiety that comes with trying to be successful. "Eternal Sunshine," while a super positive name, is actually all about stress and pressure — the way it physically manifests, and the way it affects our mental health. 'Tis a bit deep! But in the end, the track wishes anyone who is dealing with these feelings, well, "eternal sunshine."

If you're expecting to hear Suga's voice rapping on the track though, don't hold your breath. As a producer, his vocals stayed behind the scenes for this song, but he can be heard whispering his trademark "Suga" in the song.

According to a translation by Do You Bangtan?, Epik High's "Eternal Sunshine" lyrics start off with a pretty intense message.

In a sleepless dawn, the repressed tears fall.

Do you get lonely? / Sick with anxiety? / Can’t trust nobody? / Well, same here.

That "Do you get lonely?" chorus repeats before the first verse comes in.

They became uncomfortable, my body and heart / They’re always drenched, my palms / It’s an unrestricted confinement, but I’m unable to escape / I prowl before always returning / At times, it’s too much / I want to lay myself on the bed, hide within the bedcovers and only look on / For the world outside that door is darker than the night.

I got trouble sleeping / I’m suffering once again / How long it’s been, since I’ve slept soundly / I leave, eyes half open, and return, eyes half closed / Only being able to see half of the world – does that mean I only have a half-life / I suppress it and run / Not because there are dreams that chase me, but because everywhere, there’s nightmares I want to avoid / Having crumbled, I know that it’s higher than any peak / the point just above rock-bottom.

I’m never goin’ down again / I won’t crumble again / Sometimes, I want to embrace someone and cry, but I’m a perpetual trainee / Life is too hard / Even if I run as if my lungs will be torn apart towards a better me, it only gets further away / I wish you eternal sunshine.

Then comes the "Do you get lonely?" hook again.

Slow down / Stop the breathlessness / Don’t be anxious that you’ll fall behind / Good things come in due time / Pay it no mind / Just one misstep would have them leave you behind in their race / Don’t feel it, the burden to fall into step with them / Your superiors’ “Come on, come on” / They’ve come to a stop / Unloading their impatience because of their incomplete youth / The constant urgency, of fire on the balls of your feet, holds the meaning that the ceiling is on fire / It’s not your fault.

From the moment we’re born, we walk towards death, and life has us accelerate / We’re dragged around by success in order to achieve wealth and a world that only teaches us to compete with others, our entire life / Staying alive by working to death only results in obstinance, in the end / It’s not the summit, the highlands I’d been searching for / Honor over money, family love over honor / Even if I make a loss because of that, it’s relaxedness and happiness that I choose

Then the "repressed tears fall" line from the beginning of the song is repeated.

In a sleepless dawn, the repressed tears fall / Even though, perhaps because the tension has dissipated, my heart is nonchalant / What do I do?

I’m never goin’ down again / I won’t crumble again / Sometimes, I want to embrace someone and cry, but I’m a perpetual trainee / Life is too hard / Even if I run as if my lungs will be torn apart towards a better me, it only gets further away / I wish you eternal sunshine

You can listen to the song here.

Fans of Suga and Epik High are loving the collaboration and are so excited it happened.

They're also super excited for Suga, who has been a fan of Epik High for years and now has gotten to produce a song for them.

He also just celebrated his 26th birthday on March 9, so Suga's 26th year is already off to a great start.

More like this
Who Is SB19? The Filipino Pop Group Is Going To Steal Your Heart
By Sydney N. Sweeney
This Theory About The Songs In BTS' "Butter" Concept Videos Will Blow ARMYs' Minds
By Michele Mendez
Suga's Response To Questions About BTS' Dating Life Proves They Trust ARMY
By Michele Mendez
Stay up to date