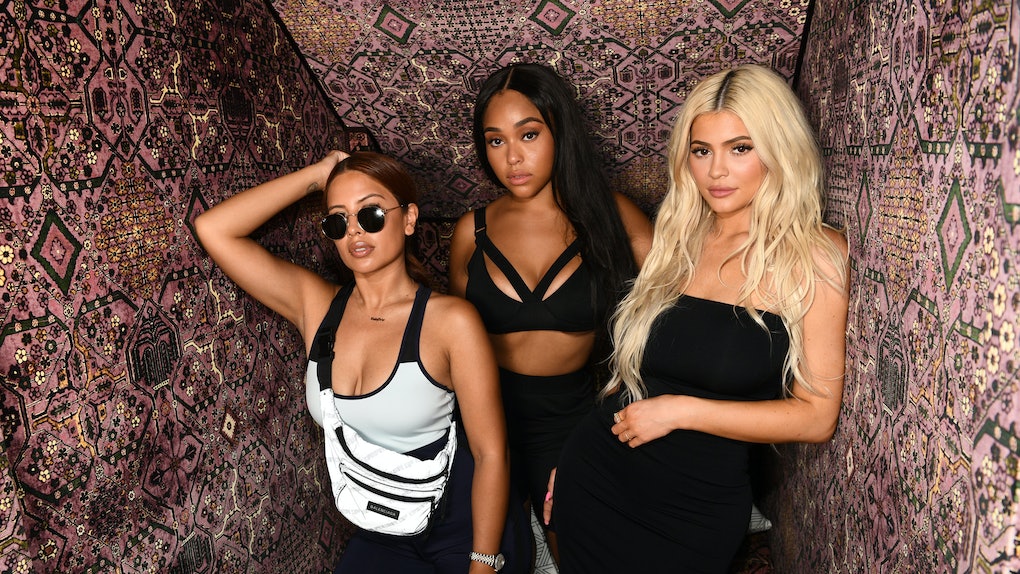 It's been nearly a month and a half since reports surfaced that Jordyn Woods was seen kissing Tristan Thompson at a house party in Los Angeles, but it seems like things are finally slowing down and getting back to normal. Namely, Woods' relationship with Kylie Jenner. ICYMI, Woods and Jenner have been best friends for years, so when reports surfaced that Woods and Thompson (Khloe Kardashian's on-again, off-again boyfriend) kissed, Jenner was put in a pretty awkward situation. But have Kylie Jenner and Jordyn Woods made up? The pair's recent Instagram activity sure does make it seem like a possibility, but it's also hard to know for sure.

It's important to note that before all of this happened, Jenner and Woods were practically sisters. They lived together, worked together, and practically co-parented Jenner's daughter Stormi together. They were inseparable. But after Woods was reportedly seen kissing Thompson, she reportedly moved out of Jenner's house. Elite Daily previously reached out to Jenner, Woods, and Thompson's teams for confirmation on the reports that Woods and Thompson kissed, and for confirmation on reports that Woods moved out of Jenner's house, but did not hear back.

But good news! It seems like Woods has been liking Jenner's recent Instagram posts, which leads me to wonder if these two have somehow managed to find a way to put the drama behind them and go back to normal.

The Instagram photos Woods has been liking are of Jenner on a family vacation with boyfriend Travis Scott and daughter Stormi, so they're pretty personal. According to BuzzFeed, Woods liked a video Jenner uploaded featuring Scott walking with Stormi and her own baby Birkin. (I know, I know, beyond cute.)

She also liked a couple of super steamy photos of Jenner and Scott in a pool, which Jenner cleverly captioned, "baecation."

It's not like Woods and Jenner are smiling and posing for selfies together again, but still, these likes can definitely be indicative of progress. Additionally, Cosmopolitan found that Woods' own mother, Elizabeth Woods, commented on a photo Jenner posted of Stormi carrying the same Birkin bag seen in the video of her and Scott walking together. Elizabeth commented three red heart emojis, which, sure, is pretty simple, but you don't leave three red heart emojis on someone's Instagram photo when that someone reportedly ended their friendship with your daughter, right? It seems hard to believe that there would be any sort of hostility between them if they are still all following each other on Instagram and liking each other's posts.

Perhaps it's just an olive branch, or perhaps it's a sign that the fan theory of this drama being a mere PR stunt holds some truth. After all, if it all went down the way we're supposed to believe it did, would Woods' own mother be reaching out to the Kar-Jenners? It's complicated and messy, but one thing is for sure: Jenner and Woods were the ultimate BFF goals, and no matter what did or didn't happen, they both deserve to be happy. Whether that means being friends again, or moving on with their lives separately is for them to decide. Hopefully, all ends well, because no one needs or deserves that much drama in their life.