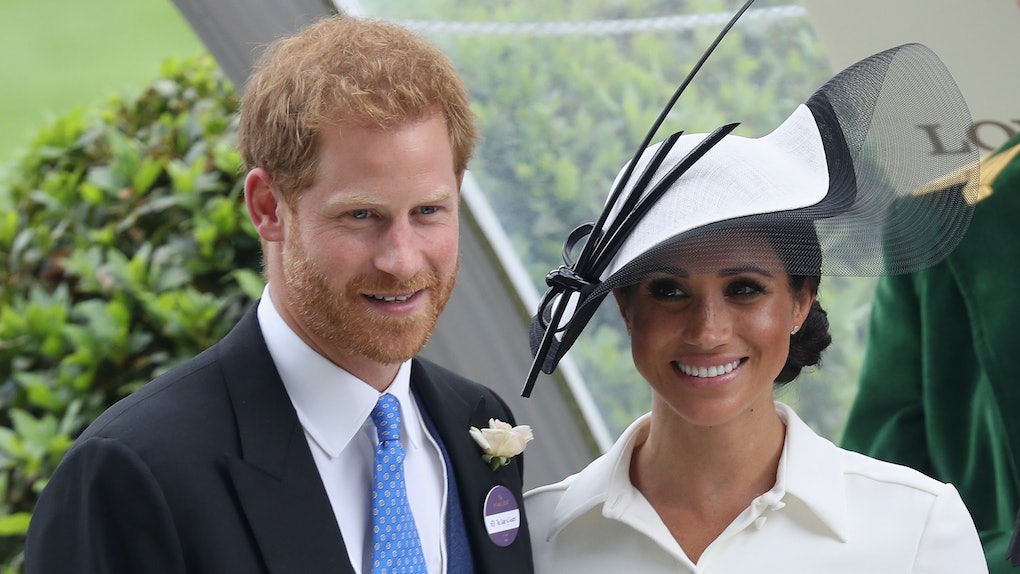 Happy Royal Ascot Day, friends! "What's 'Royal Ascot Day?'" you ask. Well, first, it's very British. Second, don't worry, I'm right there with you — I've never felt more like an American plebe than today, when I learned what the events at the Ascot Racecourse in Ascot, United Kingdom are called. On Royal Ascot Day, the royal family watches horse races at the track from the Royal Enclosure. Tuesday, June 19 also happens to be the one-month anniversary of the Duke and Duchess of Sussex's little old wedding. Prince Harry and Meghan Markle's body language at Royal Ascot Day suggests that things are going pretty well, at least according to body language experts.

After having lunch with Queen Elizabeth, Harry and Meghan arrived at the track in a carriage with Prince Edward and Sophie, the Countess of Wessex. Also in attendance were Prince Charles and Duchess Camilla, and of course, many other fancy-hat-adorned British people. (Um, can I be royal, too?)

Meghan has had quite her share of royal appearances in her first month of marriage, but this is her Royal Ascot debut. I spoke to body language expert Lisa Mitchell of Power Body Language to get her take on how Harry and Meghan seem to be feeling on this fine Tuesday. Remember, body language is just one part of the equation that makes up a couples' relationship, but here is what Mitchell gathered from photos of the adorable couple at the race course.

"Meghan seems slightly more reserved at this event and a little less animated she she's been at other events with Kate and the Queen recently," according to Mitchell. But then again, this is a rather fancy event — the pair arrived in a carriage! I personally loved the photos of Meghan and the Queen having a gas at Chesire for their first royal engagement together, but perhaps the Royal Ascot is more formal than that. After all, there are a lot of hats.

"She still exudes a genuine warmth when she smiles," adds Mitchell. "Which is indicated by her lips pulled both upward and outward. Her eyes are engaged in the smile as well showing it's not fake or forced." In other words, Meghan is definitely excited for a day at the races.

Meghan and Harry are as close as ever.

Harry is beaming in most of the photos from Royal Ascot Day (and why wouldn't he be?) and Meghan seems to keep close to him too. "Meghan keeps an arm looped through Harry's for the majority of the photos, indicating that she feels he's a source of security and comfort to her in this setting," says Mitchell. "Even when there is more space physically between them while she's talking other people, she keeps her arm looped through his when possible." Honestly, I don't blame her.

"Harry appears to be relaxed. He seems to be comfortable being Meghan's guiding arm but is careful to never walk in front of her or lag behind," adds Mitchell. I've said it before and I'll say it again, this pair is goals.

The new couple is still getting used to married life in the spotlight.

Adjusting to royal life is an enormous adjustment I cannot imagine navigating (and something I will not ever have to imagine navigating). I can't imagine having the Queen looking at me, let alone the world. "One interesting thing I noted is that she continually holds her clutch up and out in front of her torso a bit as opposed to having it a more relaxed position by her side," says Mitchell. "This could indicate a subconscious level of discomfort that she's feeling and she using the clutch as a type of blocking behavior to create space between her and the other people she is around." And I don't blame her for wanting to feel safe either! Meghan must be exhausted after the past month.

At the end of the day, Meghan and Harry are real people who look like they are in very real love, and who are living a very unreal life in which people are always photographing them. No matter who felt what at Royal Ascot Day, I wish them the very best!