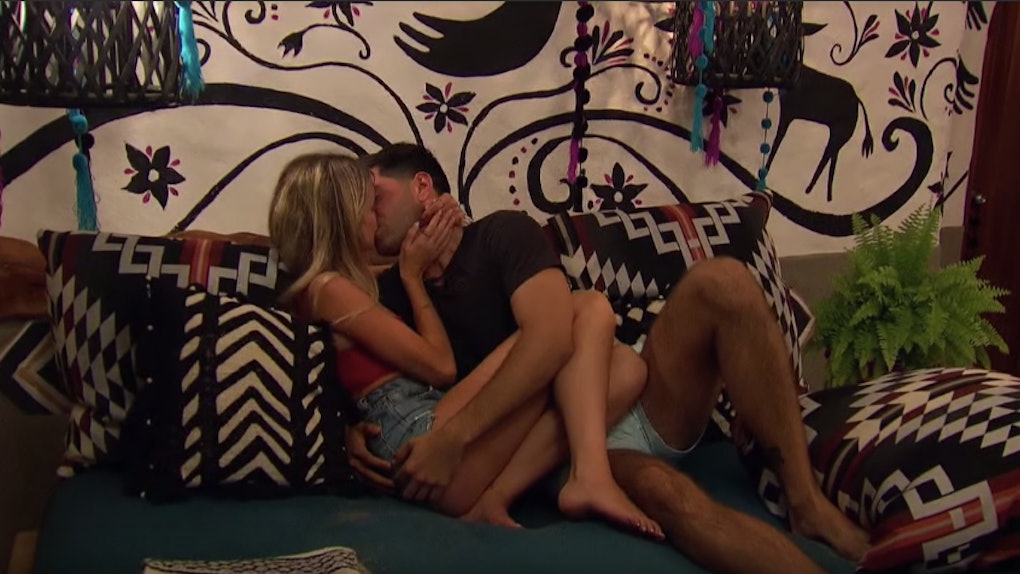 It's the second week of this season of Bachelor In Paradise, and the drama is already heating up. From love triangles, to dramatic rose ceremonies, disruptive newcomers, and so much more, Season 6 of BIP is honestly on track to becoming the best yet. The season's biggest plot line so far is the love triangle between Hannah Godwin, Dylan Barbour, and Blake Horstmann. At first, it seemed as though Hannah was all-in with Dylan, until Blake emerged from his love square and started making moves on Hannah. It's impossible to say what will happen next, but Hannah Godwin’s body language with Dylan Barbour compared to BlakeHorstmann shows that the 24-year-old is conflicted AF.

Blake found himself in a bit of a pickle during the first week of Paradise after Caelynn Miller-Keyes confessed Blake reportedly hooked up with both herself and Kristina Schulman within a day of each other at Stagecoach Festival. In Paradise, Blake was awkwardly reunited with Caelynn, went on a date with Tayshia Adams, and was awkwardly reunited (part two) with Kristina. Just, lots of awkward! But after conversations with all the women, he decided to put his past behind him in pursuit of Hannah. The only problem was that while Blake was dealing with all the drama he caused, Hannah had already started connecting with Dylan (who is super into Hannah, and only Hannah).

Hannah's love triangle got even more intense on the Aug. 12 episode, when she turned down a date with Jordan Kimball and told Dylan she wanted to keep hanging out together. Hours later, she was swing-dancing on the beach with Blake, and the two even shared a kiss — all within Dylan's eyesight. It couldn't have been easy for Dylan to watch, and if this body language expert's analysis is any indication, this season is not going to get any easier. Hannah might honestly have strong feelings for both dudes.

This kiss between Hannah and Dylan seems super sweet. It took place soon after she told him she didn't want to pursue anything with Jordan, and Dylan was super relieved to hear it. "She's got both arms wrapped around him," body language expert Traci Brown tells Elite Daily, which is a good sign. However, there was still a little resistance in Hannah as she kissed Dylan, seeing as "her knees are kind of in his chest so she's blocking just a little bit," Brown adds.

It looked like a tender moment, but it might have been a little more tense than anyone would think, according to Brown.

2. Hannah and Dylan seem like they would make a great couple.

After the drama of Hannah's almost-date with Jordan, she and Dylan relaxed with some drinks, and according to Brown, they seem totally in sync. "Here they're matching each other," Brown explains. "They're both carrying their drinks the same way and walking in step. This is what you see from a great couple."

At this point, Hannah seems totally into Dylan. Blake who?

3. But there could be some tension.

While Hannah told Dylan she wasn't into Jordan, she never claimed to be done with Blake. So, as Brown says, Dylan looks a little uneasy in this moment. "She's likely said something that makes him uncomfortable," Brown explains. "That's why he's got his hand on his head."

Perhaps there was some miscommunication at this point. Whatever the case, Hannah and Dylan weren't on perfect terms toward the end of the episode — at least not according to their body language, and definitely not according to that awkward waterfront confrontation between them and Blake.

4. Hannah is a little hesitant with Blake

Toward the end of the night, Hannah and Blake spent some time together, and based on their body language, Blake's feelings toward Hannah are clear as day. "They're sharing an intimate moment here, but notice how she's only got got one hand in between his two?" Brown says. "He's more into her than she is into him."

So maybe Hannah truly is more into Dylan than Blake.

As Hannah and Blake continued their conversation, Brown says that Hannah seemed a little removed. "Here she's leaning her head on her hand and that can reveal stress," Brown explains. "She may be a little bored." Or perhaps, she is stressed because she's confused about her feelings. Honestly, only Hannah knows where she stands at this point.

Finally, at the end of the night, Hannah and Blake took to the beach to dance and make out. "Looks like she's got both arms around him in a tight embrace," Brown says. "He's leaning in so much that she's bent backwards! So he's way into her. Much more than Dylan."

So, who is Hannah G. feeling the most? Brown calls it even. "Overall she likes both of these guys equally," Brown states. The love triangle might become more complicated, however, as a teaser for the rest of the season revealed that Blake and Hannah actually hung out before BIP began filming. Drama!

For now, it's anyone's guess who Hannah will end up with, or if she'll end up with anyone at all. It's clear she's enjoying Paradise, playing the field, and living her best life. Whatever happens, here's hoping she gets her happy ending.