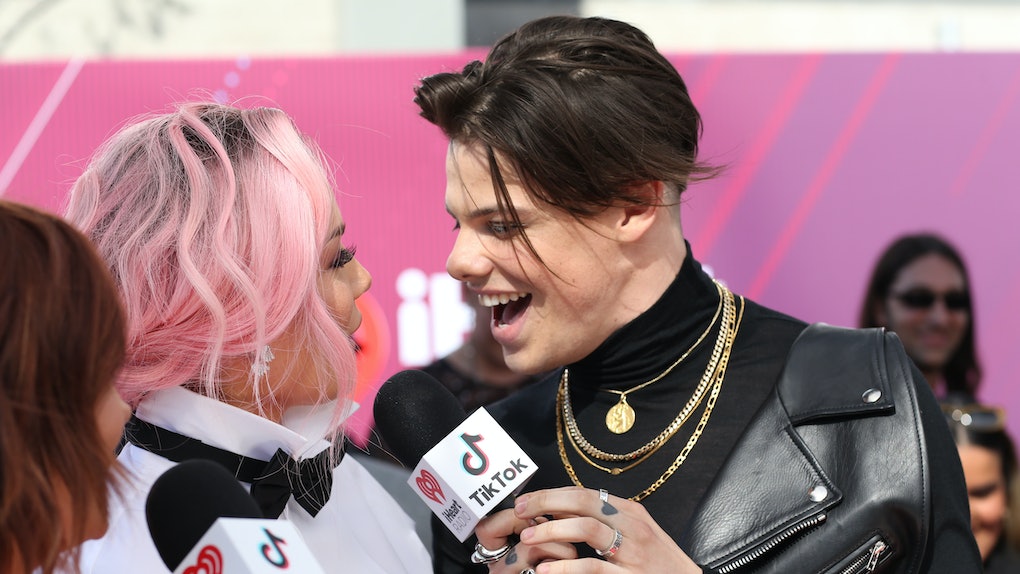 There are a lot of celebrities who like to play coy about who they're dating, or if the person they're dating is another celeb. It's understandable — they deserve to be able to keep their private lives private if they so choose. However, there are certain public displays of affection (looking at you Lady Gaga and Bradley Cooper) that put everything into question. Take, for instance, Halsey and Yungblud’s body language at the iHeartRadio Awards, which was definitely flirty. But, does that mean they're together? Honestly, it's still anyone's guess.

At the awards show, Halsey and Yungblud performed their song, "11 Minutes" together, and it definitely looked like there was chemistry. "Overall it seems like they do have a deeper than just friends connection," body language expert Traci Brown, author of Persuasion Point, told Elite Daily. "Is it love, though? Or are they doing the Bradley Cooper and Lady Gaga intimacy on stage only plan?" Brown says. "It's hard to tell from these pics. But we do know that they feel a deep connection to each other."

A picture says a thousand words, so Brown also analyzed the following photos of the two potential love birds to gauge whether or not they could be a thing. Here's what she sees.

1. They have an undeniable connection.

Halsey and Yungblud performed together at the show, but they also gave an interview together on the carpet beforehand and seemed pretty close the entire time. "This one may be the most telling of all the pics," Brown says. "It's pretty hard to look someone in the eye at close range like that if you don't have a deep connection."

While on stage, the two singers had what felt like an electric vibe between them. "I'm not sure if his eyes are open or closed," Brown says. "But she's for sure got a lock on him with her gaze." While the entire audience was watching them, Halsey and Yungblud seemed totally focused on each other.

3. Even with all the pressure, they really seemed to connect.

While it was probably intimidating being on stage in front of so many people and on live television, Halsey and Yungblud totally nailed their performance, and still managed to appear calm and relaxed. "I'm not sure if his eyes are open or closed," Brown explains. "He's for sure feeling the moment, and fully pointed her way, making sure he's giving her his energy. And she's angled his way too. They're performing as a unit here."

They're almost like partners here, and that's pretty cute.

4. Finally, they hugged it out.

After their killer performance, Halsey and Yungblud hugged it out, and there really seemed to be sparks flying around them while it happened. "This is a sweet hug," Brown explains. "She's a lot more committed to it than him! Notice how she's pulling him in close."

Now, there still isn't an indication that these two are officially dating, but this performance might very well just be another indication that there's more going on between Halsey and Yungblud than meets the eye. Whatever the case, let's hope that they're happy and that they continue to put out bangers just like this one. "11 Minutes" is fire, y'all.