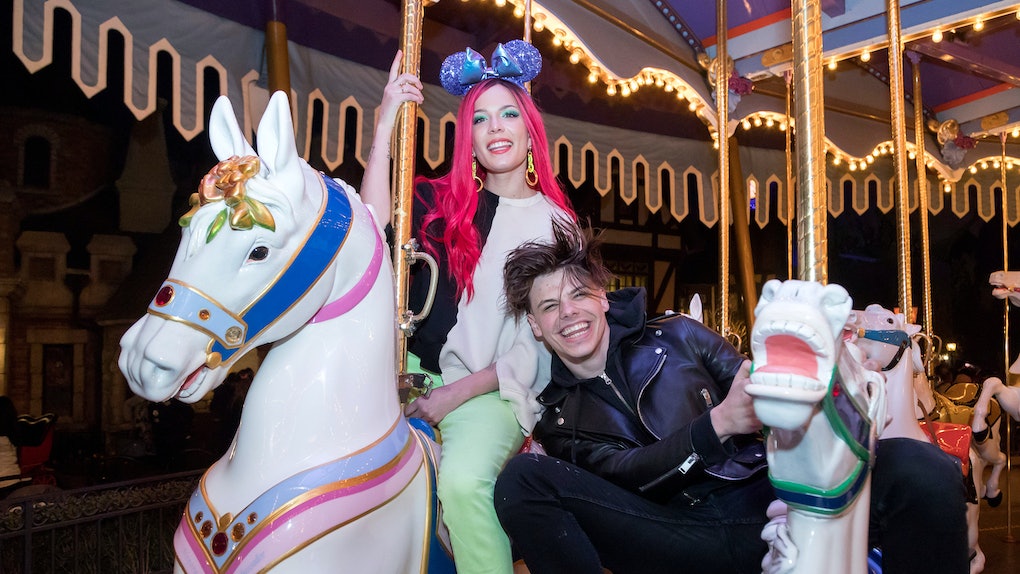 Since their recent collaboration on the song "11 Minutes," Halsey and Yungblud's on-screen chemistry has been more obvious than presents on Christmas. But after taking their chemistry to none other than Instagram, I'm convinced these two have a relationship that's more than what meets the eye. Halsey and Yungblud have not commented on any of the romance rumors surrounding them, but after seeing this photo of Halsey and Yungblud posted by Halsey herself, I'm willing to bet these two are close. Elite Daily has reached out to representatives for Halsey and Yungblud but did not hear back by the time of publication.

24-year-old Halsey took to Instagram over the weekend to upload a photo of herself with Yungblud, embracing each other and seemingly having what looks like a great time. Halsey captioned the photo with a simple, "and afterall.............." which could mean a lot of things, but the popular (albeit overplayed IMO) song "Wonderwall" by Oasis is what immediately comes to mind. If that's the case, then Halsey is either playing into the romance rumors surrounding her and Yungblud, or is just totally smitten with her rumored new man. Either way, they're clearly having a blast together, and have also reportedly been spending a good amount of time together for months now.

According to The Daily Mail, Halsey and Yungblud started hanging out in November. By January, she had reportedly attended one of his shows in Paris, and just last week, the two attended a Los Angeles Lakers game, where photographers caught them looking cozy and happy. Sure, these two could be just friends, but it really is starting to look like there's more to it than that. Despite neither of them having confirmed or denied a relationship, their chemistry is palpable.

In their music video for "11 Minutes," the two get super intimate, and share a ridiculously hot kiss. Obviously, they're performers and might just be playing their roles extremely well, but there are times when you just can't fake passion like that.

However, Halsey isn't one to comment on her love life just for the fun of it. In an interview with Glamour back in January, the chart-topping singer revealed that she struggled with opening up about her personal life, because she didn't want that to take over. "The biggest lesson I learned was to make art, not headlines," she told the magazine. "Because it can become quite easy, in the social media generation, to go from being a musician to becoming a personality."

The world may never know the true status of Halsey and Yungblud's relationship, and that's OK. The two deserve privacy, and if all they choose to give us are mysterious, sweet, sexy photos of them together, so be it. Halsey's Instagram post seems to indicate that she's falling for Yungblud, and that's awesome. She deserves to be happy! But, they could also just be friends who have gotten closer after collaborating together. Either way, Halsey seems happy, and that's all that really matters at the end of the day.