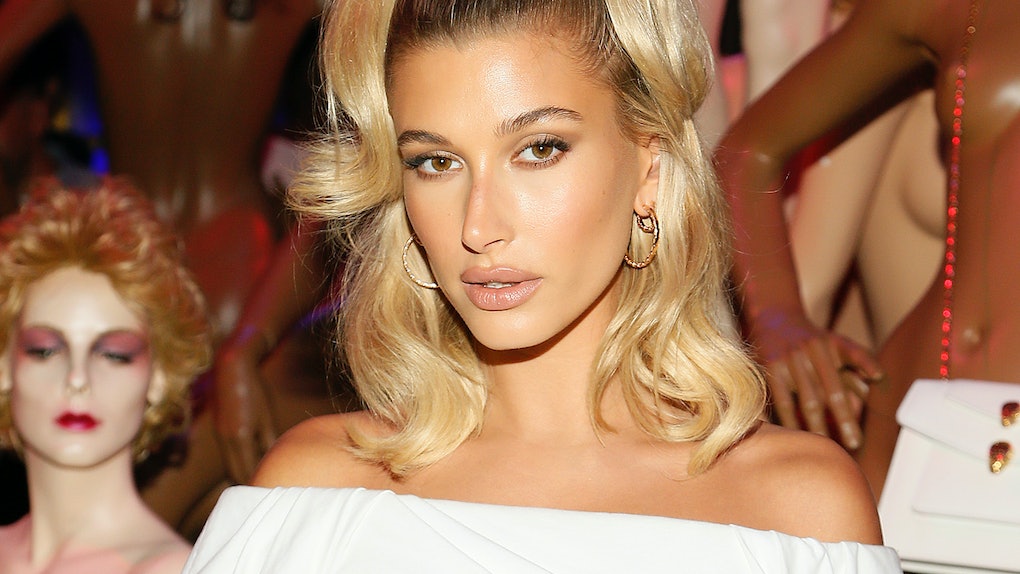 You've got to give some mad props to Hailey Baldwin. As the wife of superstar singer Justin Bieber, she's had to hear from plenty of vocal fans who think she just isn't the right one for him. Even though the couple has celebrated many milestones together, including their recent one-year anniversary, skeptics are still questioning whether or not they'll really work out. Not one to back down, Hailey Baldwin defended her marriage to Justin Bieber on their one-year anniversary, proving to haters that the lovebirds are still going strong.

The famous couple were married one year ago on Sept. 13, 2018, just two months after they got engaged. It was a wedding that came by surprise to fans, since it hadn't been publicly announced. Ever since the impromptu courthouse ceremony in New York City, it hasn't been easy for the couple to deal with the incessant negative comments about their romance, which seem to come with the territory of being in one of the most famous marriages in the world. Baldwin took the time in the October 2019 issue of Vogue Australia to share her side of the story. "Nobody from the outside really knows what's going on between us," she said. "I wake up every morning with this person. I'm the only person that has direct dialogue with this person. This is my relationship. What's so tricky about mental health is that it can be easy to let people convince you of something that's not real."

Baldwin went on to talk about the downright hateful comments she receives on social media: "When I had hundreds of thousands of comments bombarding me with: 'He's never going to this,' 'You're never going to that', 'You'll be divorced by then,' you can't help but wonder: 'Does someone see something that I don't see?" It's so disheartening to hear about the mean-spirited comments that Baldwin receives on social media. Thankfully, it sounds like the 22-year-old model has a good head on her shoulders. Her comments about mental health show that she knows the necessity of focusing on one's own truth, rather than caving into what other people may perceive you to be.

To get away from the media and fan frenzy surrounding their celeb romance, Baldwin explained in the interview how she and her husband plan getaways from the SoCal grind. "In L.A., it's always kind of chaos, and every time we try to go somewhere it's not easy," she explained. "In Canada, we have a really private place, a big property, and Justin's from there so I feel like he feels more comfortable. We have a bunch of four-wheelers and it's quiet and we just hang out. We spent Thanksgiving and Christmas there last year, because the winter is especially pretty. I cook a lot."

Ultimately, Baldwin's feature in Vogue Australia paints a portrait of a young woman who is keeping it real, despite having to deal with the difficulties of fame and marriage. "Marriage is always going to be hard and I think good relationships are the relationships that you put the work into," Baldwin said in the interview. Although haters may still be going after the model for marrying Bieber, it's clear that Baldwin is staying strong and marching to her own beat.