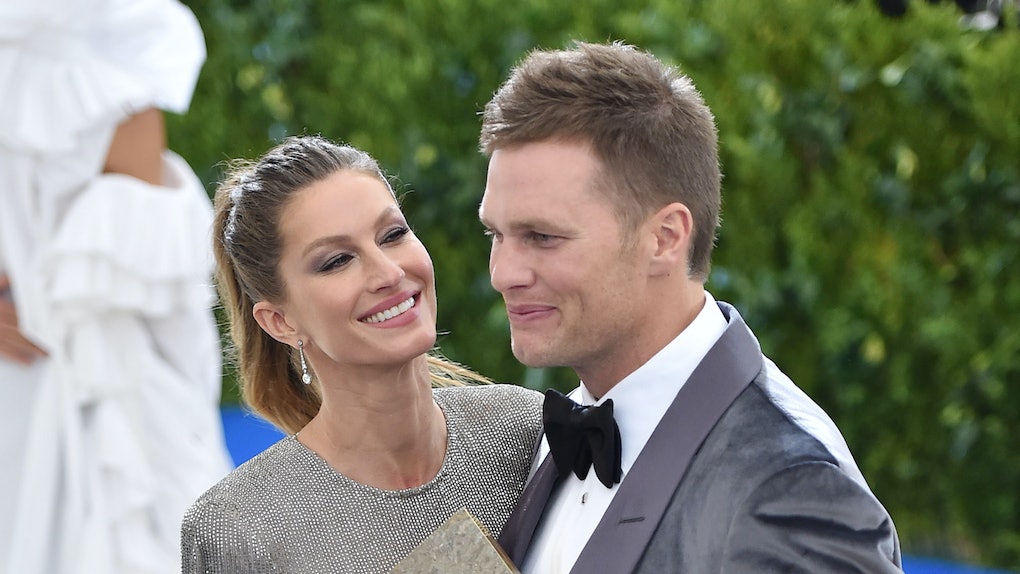 Gisele Bündchen’s Quotes About Tom Brady Are So Sweet, You’ll Def Root For Their Love

I’m not sure that there's ever been a more "golden" couple than supermodel and Goodwill Ambassador Gisele Bündchen and football star Tom Brady. They're gorgeous, wealthy, have adorable kids, and are ridiculously in love. But don't take my word for it — Gisele Bündchen’s quotes about Tom Brady prove that this is the Super Bowl of love stories. (Ugh, that pun was bad, but sometimes I just can’t help myself. Sorry, not sorry.)

So, just some quick background info on this power couple in case you haven't followed along. The two met for the first time on a blind date in late 2006, and, according to People magazine, were rumored to be a couple shortly after in 2007. At the time, Brady was fresh out of his relationship with actress Bridget Moynahan, which normally would be NBD, but just two months into the new relationship his ex announced she was pregnant. Awkward.

Despite a rocky start, Brady and Bündchen pulled through and were married in 2009. (Twice! Once in Santa Monica and then again in a big ceremony in Costa Rica.) Since then, the couple has welcomed two children, Benjamin in 2009 and Vivian in 2012, and continues to be strong and steady. Pretty amazing love story, right? Well, if you've ever seen the way that Bündchen talks about Brady, there's no surprise there. Here are my favorite things Gisele has said about her hubs over the years.

On What She Thought Of Him Before They Met

Before the two even met, Bündchen had her eye on Brady. She told the Boston Herald that she thought he was "definitely not too shabby," calling him "cute," but saying that if he had a girlfriend, she wouldn't waste her time. "There are too many men in the world to go after a man who has a woman." True.

On What She Thought When They Met For The First Time

When they finally did meet face-to-face, Bündchen told Vanity Fair it was pretty much love at first sight.

I knew right away — the first time I saw him. We met through a friend. The moment I saw him, he smiled and I was like, That is the most beautiful, charismatic smile I’ve ever seen! We sat and talked for three hours. I had to go home for Christmas, but I didn’t want to leave. You know that feeling of, like, you can’t get enough? From the first day we met, we’ve never spent one day without speaking to each other.

On Her Favorite Thing About Him

Despite the instant attraction, Bündchen told Harper's Bazaar that what really made her fall for Brady was his heart.

He has a very pure heart. He’s very naive, almost like a child. That is my favorite quality about him. One thing that I thought was so amazing when I first met him is that he is innocent. He sees the world with [rose] colored glasses.

On How Proud She Is Of Him, Even When He Doesn't Win

She also isn't shy about sharing how she feels about Brady, through good times and bad, on Instagram.

To my love, we are incredibly proud of you because we are able to see every day all the commitment, sacrifice and hard work that you have devoted to become the best in what you do. We love you! ❤️

On How She Feels About Him As A Husband And Father

On Their 10-Year Anniversary

Over 10 years ago I fell in love with you because of your beautiful and sensitive heart. I love the sweetness in your essence. Today you are starting a big new chapter and I wish you so much happiness and fulfillment in all aspects of your life. Happy birthday my love! Making 40 feel like 20!!! You go @tombrady !!!! Te amo ❤

On Another Important Trait She Loves About Him

He's very close to his family… He's Catholic. His parents have been married 40 years. He's got a pure heart. That's all that matters — he's got the purest heart.

See! They really are the ultimate golden couple. Find yourself someone who talks about you like Bündchen talks about Brady.