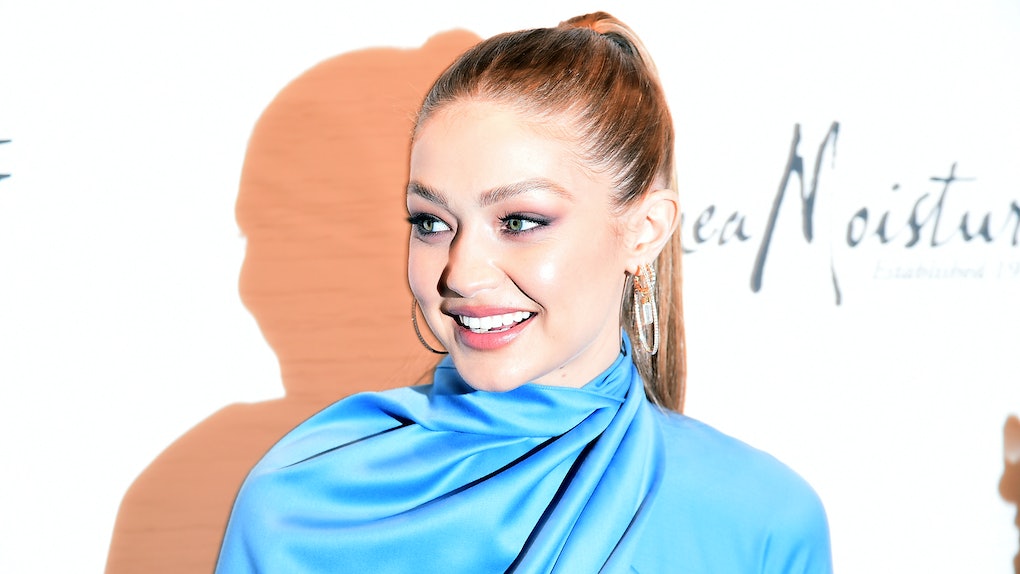 When I was a kid, it was always considered "cool" to have a themed birthday party, be it Hello Kitty, Transformers, et cetera. However, as I grew older, I attended fewer and fewer events were themed, aside from a few frat parties with awful themes I avoided at all costs, anyway. Just when I thought the death of the themed party was official, one very famous model has revived the whole idea — yup, Gigi Hadid's denim-themed birthday party looks just made themes cool again. In fact, it made denim-on-denim cool again, too. Let's just say it was a revolutionary party overall. Happy birthday, Gigi!

I know it was Gigi's birthday, but she gave me a gift, aka the return of themed parties once and for all. I don't know why or how she landed on a denim theme, but I'm seriously so glad she did, because nobody rocks a pair of baby blues better than Hadid. She turned 24 years old, aka the same age as me, which makes me feel seriously unaccomplished in comparison, given that the model has graced more covers and walked more runways than I can count. It's fine, I'm thriving in my own way, same same but different! I am a little annoyed I didn't get an invite, though, given that the bash was held right here in New York City at L'Avenue at Saks.

Gigi wore a white baby tee with lettuce leaf trim, stacks of colorful bracelets and necklaces, and a lightwash pair of jeans, natch:

Meanwhile, her sister Bella showed up in head-to-toe midwash, including a bustier and a denim jacket:

Mom Yolanda went for a dark wash three-piece suit, which was kind of major:

A lot of the photographic evidence we have from the party is courtesy of the photobooth, from which tons of Hadid's family members posted pics. Love a black and white moment!

Her dad, Mohammed, posted this cute up-close shot, which confirms Gigi also had a denim jacket on hand:

And her older sis, Alana, posted this sweet shot:

Of course, the night wasn't just for family — in fact, it was chock full of celebs. Alexa, play "A Public Affair" by Jessica Simpson! Attendees included Olivia Culpo, Hailee Steinfeld, and Taylor Swift, just to name a few, although I need to throw a little shade at Swift for not wearing any denim. Girl, when there's a theme, you have to commit!

In fact, Graham was so inspired by the theme that she continued rocking denim! A jean queen!

I know I didn't get the invite, but I might damn well spend the rest of spring dressing like I was there. Bring on the denim, people! If you're curious as to all the pieces I've got my eye on this season, it just so happens that I could totally see a Hadid rocking something like the Wrangler Retro Crop Denim Jacket ($149, wrangler.com), with its edgy wash and short, boxy silhouette.

Likewise, it's only a matter of time before all the top models are embracing the denim bermuda shorts trend. TBH, it took me a while to warm up to this look, but after seeing American Eagle's super cute, ripped-up High-Waisted Tomgirl Denim Bermuda Shorts ($50, ae.com), I can honestly say I'm into it.

If your style is a little more polished and you don't see yourself in laid-back baby blues like Gigi, you can always opt for a white wash and a totally different silhouette. I'm obsessing over Warp+Weft's HTO Button Front Dress ($78, warpweftworld.com), and all the denim sold by the brand is under $100, making it a great option if you intend to stock up, just in case Gigi throws another party.

So, what have we learned here? First, that Gigi Hadid is the undeniable blue jean queen. Second, that she probably should've invited me to her party, but I'm not mad, because she totally made themed events cool again. Third, that denim, be it classic, bold, or head-to-toe, is on the rise for spring and summer, so if you don't have jeans you love, it's time to hit the mall.