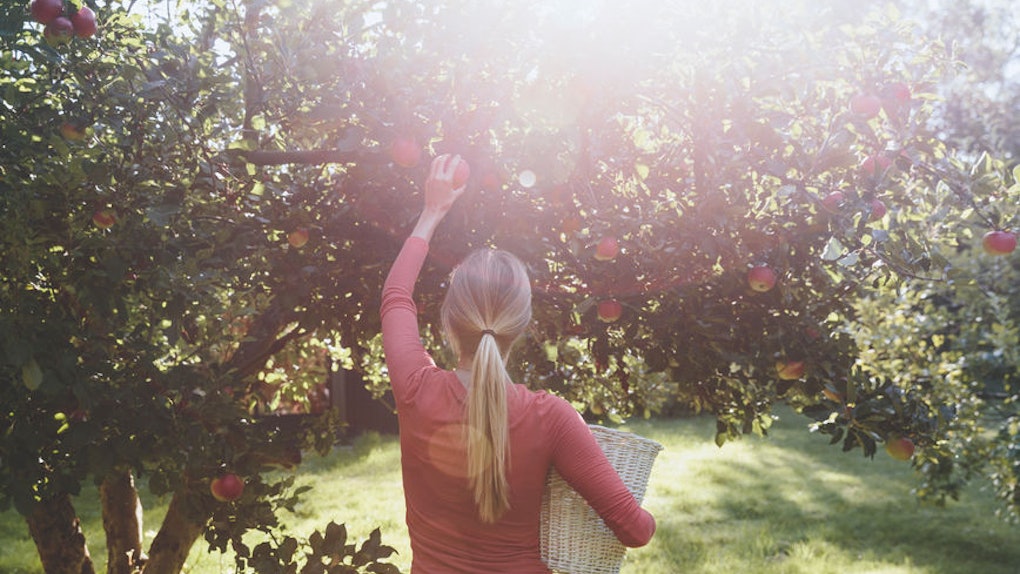 As the saying goes, an apple a day keeps the doctor away. While this may not be the most sound medical advice, unless you have a severe allergy, apples are essentially harmless. So, why is it that as a woman, you have to actively convince your boyfriend to go on an apple picking date with you? When did apples — and pumpkins, for that matter — stop simply being fruit and start being used to justify blatant sexism?

The stereotype goes that millennial women are obsessed with fall, while men are loathe to take cute apple picking Instagrams and don't dare drink Pumpkin Spice Lattes. Having an intense aversion to a season is arguably just as absurd as idealizing it. And while evidence suggests that gender may not solely be a social construct, biology aside, it's clear that societal norms do help reinforce gendered behavior and encourage gender-specific stereotypes.

Calling a woman "basic" because she drinks Pumpkin Spice Lattes, wears a flannel shirt and Ugg boots, and wants to go to an orchard to pick apples with her boyfriend is not only ridiculous, but it's also degrading.

Perhaps men are not always as likely to enjoy posing for Instagram photos and discussing clever fall-themed captions at great length as women are, but it really shouldn't be a physically painful experience. It's as simple as this, guys. If you care about your girlfriend, for the love of God, please just go apple picking with her.

This photo was taken of me by my friend's boyfriend, who I am pleased to report went apple picking with three women and lived to tell the tale.

I'm not saying every dude cringes at the idea of picking apples, but some men seem to have a huge problem with this relatively inoffensive activity. According to users on Reddit's AskMen, the three major arguments against apple picking are as follows: apples are sold at the grocery store, where they tend to taste better in addition to being more easily accessible; it's actually someone else's job to pick apples from trees; and women don't even enjoy this boring outdoor activity, but are just in it for the photo op (and possibly the apple cider donuts).

Let's work backwards here. First of all, apple cider donuts are freaking delicious, and they taste way better when they're freshly made. And don't forget kettle corn and hot apple cider. So, in my opinion, if that's all you want out of the experience, it's still worth it.

Next, I can personally tell you that apple-picking is actually pretty fun. Dressing the part makes it even more enjoyable. And yes, it also means there will be opportunities to take a few nice photos for social media. The horror.

Finally, believe it or not, women are aware that apples are sold in the store, and that there are people who harvest fruit for a living. I could argue that the same goes for meat and farmers, but there are still guys who like to hunt for sport. And speaking of sports, most games are shown on TV, yet many men prefer to watch them at the stadium. If my examples sound sexist to you, good. You're beginning to recognize the irony of the situation.

A photo taken when I went apple and pumpkin picking with my sister, after the guy I was then seeing refused to come along.

The bottom line is that compromise is the key to a healthy relationship. If you want your relationship to last, both you and your partner are going to need to make a few concessions every now and then.

Maybe your girlfriend couldn't care less about basketball, but she made an effort to learn about the game. She probably still doesn't love watching every play and replay, but she can now name your favorite players and their jersey numbers. Why? Because it's something you care about, and she cares about you.

Please, just do this one small thing for your girlfriend. Fall comes around once a year, and one day of festive autumn activities won't kill you. When you love someone, you should want to make them happy. Maybe you can't whisk your girlfriend away on a romantic getaway at a moment's notice, but you can take her apple picking. If she prefers watching a slasher film or carving a pumpkin, the same logic applies. It's a small price to pay to bring a smile to her face, and, hey, you might not even hate it.