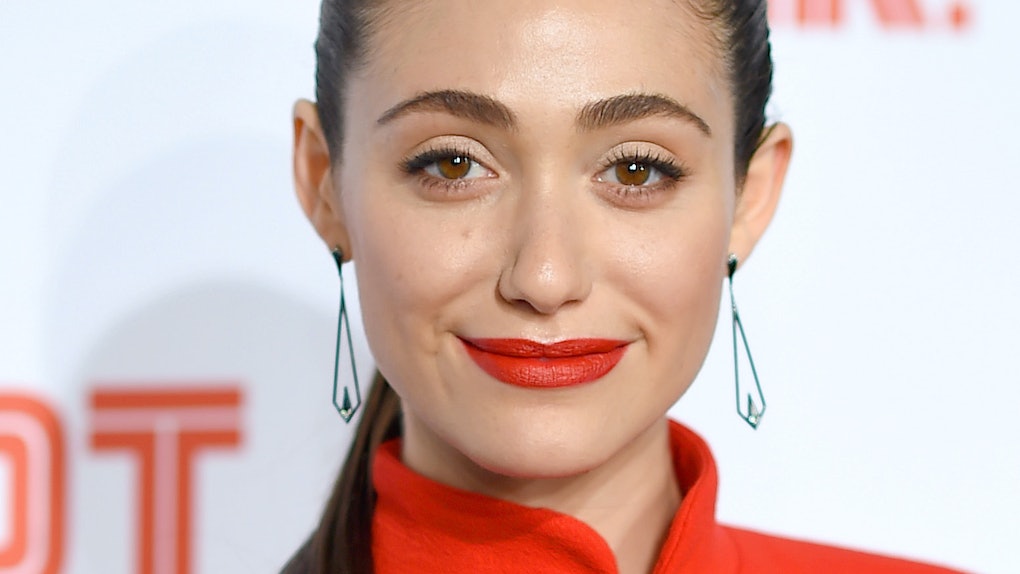 Stand aside, haters. Emmy Rossum's response to a troll who said she's "paid to get naked on TV" proves she has zero tolerance for shade. On Oct. 7, the Shameless star took to Twitter to joke about that epic moment when Kamala Harris told Mike Pence "I'm Speaking" at the vice presidential debate. "Can't wait to get my I'M SPEAKING t-shirt," she tweeted, to which a troll replied, "Yeah your shirts that say I GET PAID TO GET NAKED ON TV are sold out." Brace yourself for her clapback, because it is straight 🔥.

"I get paid to tell stories and life sometimes involves this awesome thing called sex. Maybe you've just never had any so you don't know," she responded. MIC 👏 DROP 👏. (For the record, there's nothing wrong with having little or no sexual experience, but it's never cool to shame others for their sexuality.) Rossum later followed up that epic response with another tweet, writing, "When I say something Trump supporters hate, they love to come at me for my body. 'Shut up and go back to being naked.' They seem to think I should be ashamed of my female naked body. I don't feel shame. I love my body. That must be intimidating for them. I'm not sorry." Now that's the kind of energy I need in my life.

As a Showtime series, Shameless is able to use all the profanity and show all the sex it wants (which, TBH, I fully support). Back in January 2015, during Showtime's "Sexuality and Television: A Female Perspective" panel at the Television Critics Association's winter TV previews, Rossum gave her take on the series' sexual content. "We're just trying to find the honest truth of what a character would do in that moment," she said, per Entertainment Weekly. "If the honest truth involves sexuality, if it involves intimacy between two characters or violence between two characters, whatever it is, as long as it feels real."

For her, the show's intimate scenes aren't exploitive, and she's never felt exploited herself while filming, even though Shameless was her first experience with on-screen nudity. "I thought it suited the character," she told The Hollywood Reporter in May 2012. "This is a very low-income family, they have very thin walls, they don't have money for entertainment, and this girl likes to have sex. For me to glamify her would be not realistic. I have a lot of control over what I want to show, when I want to show it and when I don't want to show it."

Emmy Rossum, you're a legend. Now if you will excuse me, I need to go purchase my "I'M SPEAKING" T-shirt.