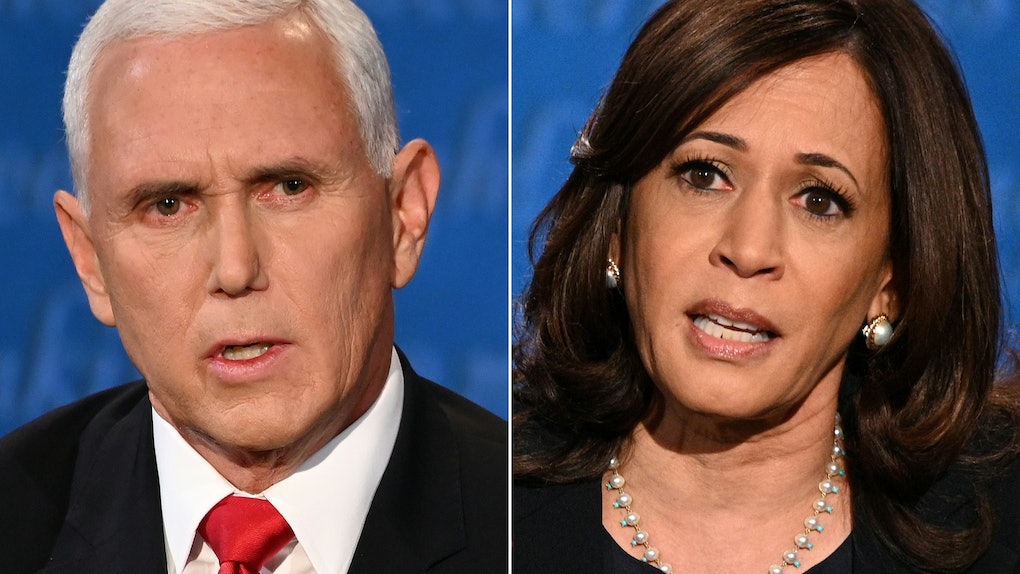 Between a wild first presidential debate, President Donald Trump's coronavirus diagnosis, and all the general upheaval of the election cycle, the Oct. 7 vice presidential debate was nerve-wracking even before it started. Thankfully, things started off civil and polite, despite debate moderator Susan Page immediately firing off contentious questions about the coronavirus pandemic. Then, barely 15 minutes in, Vice President Mike Pence made several attempts to interrupt Sen. Kamala Harris during her responses to him, and Harris wasn't having it. After expressing visible frustration at being repeatedly interrupted by Pence, Kamala Harris told Mike Pence "I'm speaking" at the vice presidential debate — and it's a big mood.

When discussing the economic fallout from the Trump administration's response to the pandemic, Harris was interrupted by Pence multiple times before stating, "Mr. Vice President, I'm speaking. I'm speaking." As she reclaimed her time on the debate stage, she held up her hand and continued speaking, apparently unfazed. Although the senator had to directly remind Pence to refrain from impeding on her responses several times throughout the 90-minute debate, she remained markedly composed.

Shortly afterward, on a question about the economy and climate change, Harris pushed back on Pence's attempts to speak over her about Joe Biden's stance on tax cuts, even after the debate moderator, Susan Page, repeatedly reminded him that it was still Harris' turn to address the audience. However, Harris took back the debate stage herself by reminding Pence that it was her turn to speak: "Mr. Vice President, I'm speaking. I'm speaking," she said. "If you don't mind letting me finish, we can then have a conversation. OK? OK." And a third time, as Page attempted to move on from a question, Harris requested to be given equal time to Pence to respond.

A lot of people compared it to Rep. Maxine Waters' famous "reclaiming my time" moment from 2017.

However, others pointed out how upsetting it was that it was even necessary.

The debate started with some front and center questions on the ongoing coronavirus pandemic, which is no surprise given its severity and the president's own diagnosis, announced on Oct. 1. Pence, one of the president’s most trusted advisers, was appointed by Trump as the head of the White House coronavirus task force on Feb. 26. While the Trump administration has continued to stand by its response to the pandemic, it continues to face criticism on its approach to dealing with this nation-wide crisis. As of Oct. 7, the virus has claimed the lives of over 200,000 Americans, with low-income, minority, and elder communities being the most heavily affected. However, the debate also touched on a number of other major subjects in American politics, including the economy, foreign relations, and race and policing in America.

Although two more presidential debates are scheduled for Oct. 15 and Oct. 22, the president’s health status has cast uncertainty on whether these events will continue as planned. Trump has said he plans to continue with the debates as scheduled.