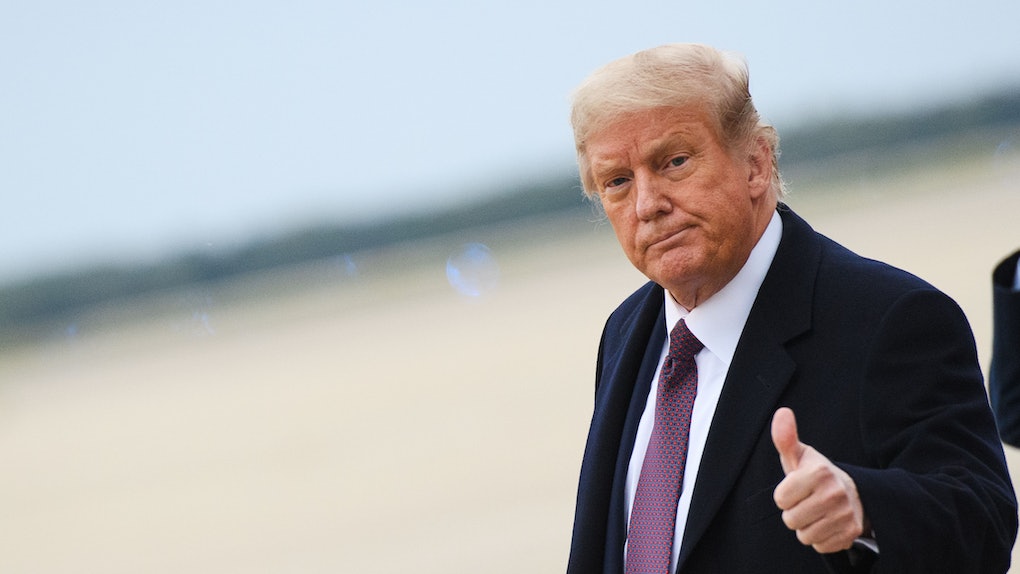 These Tweets About Trump's Coronavirus Diagnosis Make A Good Point

I mean, it was really just a matter of time, right? After months of disputing the efficacy of masks, holding indoor rallies, and generally questioning the science around coronavirus, President Donald Trump has tested positive for coronavirus, which causes the disease COVID-19. Whoops. And given the president's history of not taking the disease seriously, many people are calling it karma — and calling out Trump for potentially exposing others with his lax attitude towards the disease.

Trump announced that he had tested positive for coronavirus via Twitter early on the morning of Friday, Oct. 2. "Tonight, @FLOTUS and I tested positive for COVID-19. We will begin our quarantine and recovery process immediately," he wrote. "We will get through this TOGETHER!" It was not immediately clear where or when he had contracted the virus, which is believed to spread through person-to-person contact and potentially aerosol transmission, but the president held a large indoor rally, in defiance of coronavirus safety restrictions, about two weeks prior. He also held a meet-and-greet with supporters at his golf club in Bedminster, New Jersey, less than 12 hours before he tested positive for coronavirus. According to witnesses, he came into contact with approximately 100 people at the event, per The New York Times.

Since the coronavirus was declared a global pandemic on March 11, the president has repeatedly downplayed the threat of the disease, and refused to wear a mask in public or to maintain social distance, two tactics which experts say are crucial to preventing the spread of coronavirus. As of Oct. 2, some 207,000 Americans have died of the virus. So now that Trump himself has tested positive, people are pointing out how Trump's irresponsibility with coronavirus safety precautions hasn't just impacted his health, but the health of everyone around him.

Meanwhile, many people called it karmically ironic that, despite downplaying the threat for months, Trump had gotten the virus himself.

And some people even brought up the late Supreme Court Justice Ruth Bader Ginsburg, who died on Sept. 18. The president waited less than 24 hours to announce he would nominate a new justice to replace her before the election, despite Ginsburg's deathbed statement that she wanted her replacement to be nominated by the winner of the 2020 election.

The president reportedly only has mild symptoms — per the Times, both he and first lady Melania Trump are experiencing "coldlike" symptoms. Vice President Mike Pence, who would take over the office of the presidency should Trump be incapacitated, has reportedly tested negative for the virus, per CNN.

Still, the positive test has thrown the 2020 election cycle (further) into disarray. With barely a month to Election Day, it's uncertain if the president will be well enough to campaign or participate in more debates. On Sept. 29, less than a week before his positive test, Trump and Democratic challenger former Vice President Joe Biden held their first presidential debate, though the two maintained distance and did not shake hands. The Biden campaign later confirmed to PBS White House Correspondent Yamiche Alcindor that neither the Trump campaign nor the White House had contacted them to alert them of possible exposure.

More like this
Will Colleges Require A Coronavirus Vaccine In Fall 2021? The Rules Are Clear
By Rhyma Castillo
These Tweets & Memes About Matt Gaetz's Venmo All Make The Same Joke
By Cianna Garrison
The More Contagious B-117 COVID Variant Is Now The Most Common Strain In The U.S.
By Rhyma Castillo
Stay up to date