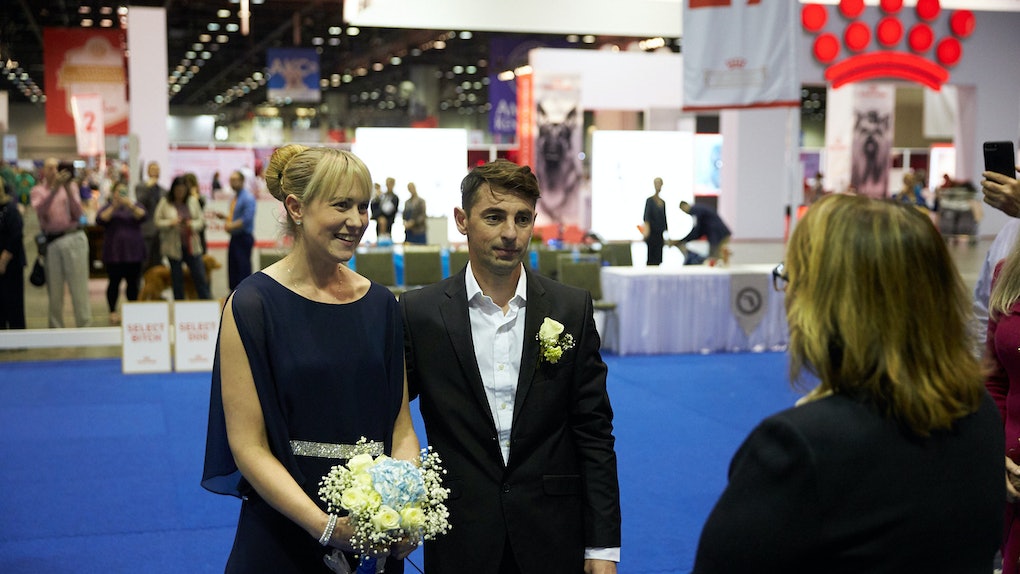 For a lot of people, fantasizing about their dream wedding is a fun way to pass the time and browse Pinterest, no matter your relationship status. Maybe your dream wedding is at a winery, or a castle in Ireland. Maybe it's eloping and spending the money on a dream honeymoon or a down payment on a house. There's no wrong way to get married, as long as you're happy. But, if you're looking for some more dream wedding inspiration, then look no further than this couple who got married at a dog show. Emma Willblad & Viorel Scinteie’s dog show wedding is basically every dog-lover's dream come true, and the story behind the adorable nuptials is also pretty amazing.

For some people, watching the annual American Kennel Club National Championship Dog Show Presented by Royal Canin is a fun tradition, usually done while eating Christmas cookies from the comfort of one's living room. However, for Pumi breeder and World Champion Canine Freestyler Emma Willblad, the dog show is a pretty big deal. So last year, when Willblad attended the show and wanted to bring some of her Pumi puppies, she knew she would need help traveling to the show in Orlando, Florida from her home country of Sweden. Fortunately, a Facebook connection who also happens to be a dog trainer was able to help out. Enter: Viorel Scinteie.

Willblad reached out to Scinteie for help, and two attended the dog show together after having never met in person. The rest is history! They fell in love working with the adorable puppers (how could you not?!), and at this year's show, on Dec. 13, they tied the knot! But who was the mastermind behind this brilliant and sweet wedding? None other than Willblad herself, who organized the wedding at the dog show without her fiancé even knowing it was going to happen! Yep, this dog-show wedding just got even cuter, because it was also a surprise wedding.

Speaking to AKC TV, Willblad revealed that she told Scinteie that they had to get dressed up to meet a special guest, but he had no idea that they were going to get married that day. The two had traveled to Florida from Europe, after all, going back to where they first met, so it makes sense that they would want to tie the knot at the place where it all began. (Even if there was some dog fur and slobber.)

Nevertheless, the two had a lovely wedding, and since Willblad's dog got to walk her down the aisle, it sounds like it was quite special to them as well. While some grooms might have been a little shocked and thrown off by a surprise wedding at a dog show, Scinteie took it all in stride, saying "She is the one," and leaving it at that.

Obviously these two have a love story for the ages, and since they got to get hitched surrounded by their furry pals, they really are living the dream. A dog show wedding might not be for everyone, but it was Willblad and Scinteie's dream come true, and it was adorably cute. Congrats, you two!