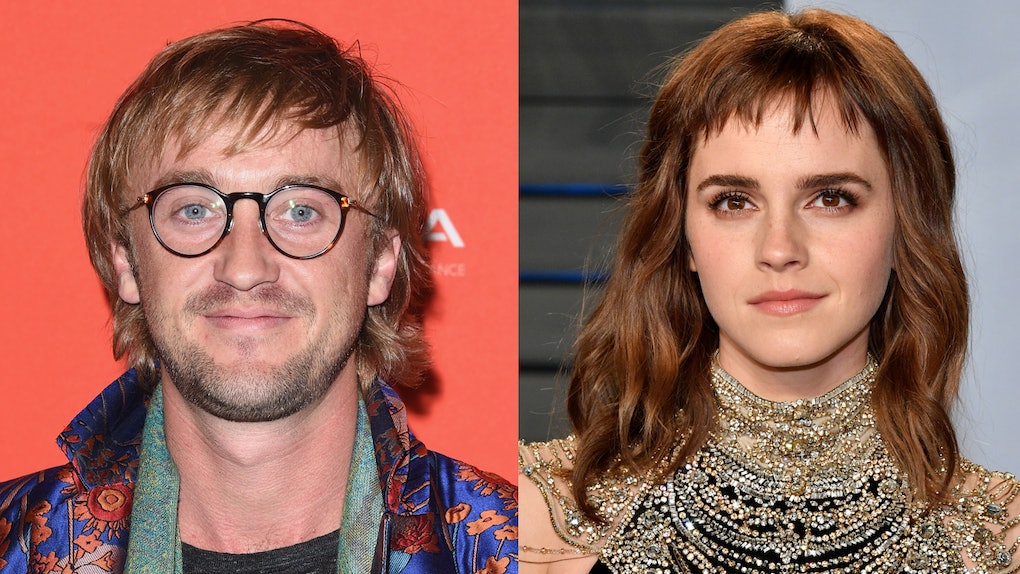 Brace yourselves, Potterheads. It looks like there might be some magic between Hermione and Malfoy. The two actors and childhood friends have maintained that their relationship is strictly platonic but Emma Watson and Tom Felton's body language says they could be way more if they wanted to.

Obviously, we all know that Felton, 31, and Watson, 29, go way back. The two met when they were just kids on the set of the first Harry Potter. And Watson has straight-up admitted that she had a pretty major crush on Felton back in the day.

“Between the ages of 10 and 12 I had a really terrible crush on Tom Felton. We love a bad guy, and he was a few years older and he had a skateboard and that just did it really,” Watson said during a 2012 appearance on The Jonathan Ross Show. “He used to do tricks on it. He was so cool. He totally knew [I had a crush]. And the thing is, he’d turn and go, ‘Oh, I see her in a younger sisterly way.’ And it just broke my heart, still does.”

Mhmm, that's right. She's openly admitted that she had feelings for him back in the day. But now the two are just pals who post insanely cute Instagrams with each other.

Traci Brown, body language expert and author of Persuasion Point, analyzed the two stars' body language in their most recent photos together, and all I've got to say here is whoa.

Speaking of their Instagrams, let's dive in.

We might be reading into some of those cute Instagrams.

Despite how heartwarming this photo is, Brown says there's actually nothing romantic going on here.

"It looks like he's teaching her how to play," she says. "They're leaning in, focused on the same thing and he's gently touching her hand. Is it sweet? Yes? Is that usually how the first guitar lesson goes between anyone? Pretty much."

Brown says it's probably best not to read too closely into this one. No matter how cute they look in their jammies.

All right, so this one gives us a lot of bang for our buck by showing us two different instances of Watson and Felton interacting.

In the first picture, Brown notes the two are showing some "real energy" between each other. "They've got their heads together and are both smiling at about the same level of intensity," she says. "And that's what great couples do. Clearly they're connected and having fun."

All I'm taking away from that is if they wanted to be a great couple, they would be.

Next, we have to shift our attention over to the video. "This is really cute," says Brown. "They're having so much fun together you'd think they were a couple." Aw.

"He's taking the lead and she's just peering over his shoulder giggling, taking his advice to hang on tight," she continues. "You don't see people that are this close stay just friends for long!"

Did you read that last line, people? They may be friends now, but people with this sort of chemistry don't stay friends for long according to Brown.

So now we just have to sit back and wait for them to realize what their body language has been saying this whole time: They'd make a great couple.