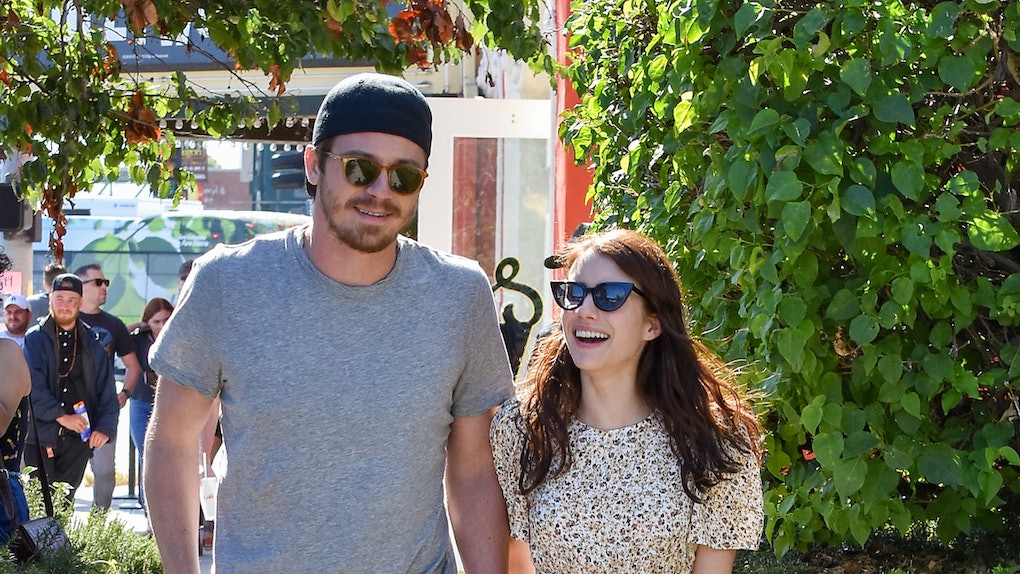 With the news dropping that Emma Roberts is reportedly pregnant, it's time to take a closer look at her connection with boyfriend Garrett Hedlund. Because if Emma Roberts and Garrett Hedlund's astrological compatibility is any indication, they may face a bit of a rocky road ahead as they figure out how to make their dynamic work best for the (reported) three of them.

Here’s what we know about their relationship so far. Back in March 2019, news broke that Roberts had finally called it quits for good with her longtime on-again, off-again partner, Evan Peters. Shortly after that, rumors of her romance with Hedlund began. According to Us, a source close to the pair said, “Garrett and Emma have been friends, but this is new, casual, and just a couple of weeks old.” The couple played things pretty low-key, occasionally popping up around Los Angeles and New York. In January 2020, they were continuing to keep things casual and weren't talking about an engagement or marriage at the time. “They like hanging out and going out together, and their relationship is more fun than serious,” a source told Us. If these new reports are true, things just got a lot more serious for the two of them.

Since the couple has been playing things cool, fans don't have a ton of insight into their connection. But one way they can get a sneak peek at what it might look like is to take the couple's zodiac signs into account. Roberts was born Feb. 10, 1991, under the sign of Aquarius, and Hedlund's birthday is Sept. 3, 1984, which makes him a Virgo. If you're familiar with these signs, the first thing that jumps out is that they're a bit of an astrological odd couple. They have very different approaches and values, not to mention ways of dealing with conflict. While these two can certainly make things work, and even thrive in a relationship, it will take some persistence, patience, and plenty of compromises. Here's what else we can surmise about their connection based on their astrological compatibility.

They have a very different approach to life.

These two signs tend to move at different paces in life and their relationships. Virgo's all about action and taking initiative once they've made up their mind about something. Aquarius, on the other hand, is laid back, chill, takes things at their own pace, and can easily feel overwhelmed by Virgo's decisiveness. They may even find Virgo to be a bit too intense. Rather than go with the flow like other air signs might, Aquarius has a bit of a stubborn streak that'll lead them to dig in, without explaining why they're more upset. The more vocal Virgo gets about their frustrations, the cooler and more aloof Aquarius can become, as they're very adept at simply blocking out what doesn't interest them. Which is to say, finding ways to communicate by meeting in the middle and identifying compromises is the only way around this impasse.

They have major power couple potential.

While a Virgo and Aquarius who are at odds can create an epic clash, when they're on the same page they can be a powerhouse duo. There's no problem the two of these signs can’t think around together with Virgo's logical mind and Aquarius' creativity and unique viewpoint. Virgo's all about acts of service and Aquarius is the humanitarian of the zodiac, so together they can be a great force for change, especially if they can channel all that energy into good works and making the world a better place. This can also make them excellent and dedicated parents who put their all into creating a family together.

They can bring out the best in one another.

While their differences make for plenty of opportunities for friction between Virgo and Aquarius, they also offer a lot of potential for growth. Both of the signs push the other outside their comfort zone, and towards trying new things. If done lovingly and if each party is receptive, this can create a true sense of adventure in the relationship, keeping things exciting and fresh no matter how long they're together. It also allows both of them to see the other's perspectives in new ways and expand their world view. Virgo can be a grounding force for Aquarius and, in return, Aquarius can help Virgo let go a little bit and embrace a sense of freedom and spontaneity. It's a thrilling combo when the two signs trust one another enough to ease up.

There are certainly easier pairings of the zodiac than Aquarians and Virgos like Roberts and Hedlund, but that doesn't mean they can’t make it work and have a wonderfully loving and fulfilling relationship. And if the rumors are true that they have a baby on the way, then congrats because that's going to be one seriously adorable kiddo.