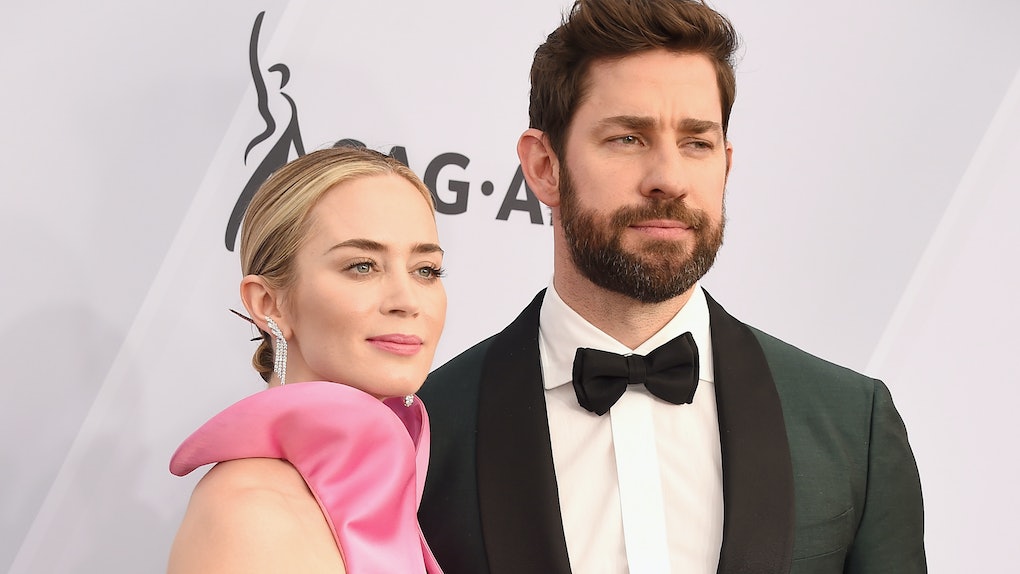 There's no denying that Emily Blunt and John Krasinski are currently having a moment. It's not really all that surprising, given that they're both ridiculously talented, gorgeous, and hilarious — not to mention the fact that they're still totally in love 10 years into their relationship, (which is like a freaking lifetime out in Hollywood). So, if you're anything like me, you've found yourself desperately searching for the aspirational pair on every red carpet during the current awards season. Because they never disappoint, you know? However, Emily Blunt's 2019 SAG Awards speech shoutout to John Krasinski took this power couple to a whole new level.

The horror film — in which the married couple played, well, a married couple — marked the first time the two actors ever worked together. And you guys, it really paid off.

Blunt ended up taking home the award for her role in A Quiet Place, but not before she thanked her husband for his imperative role in her performance. She told the audience, "I am going to share this completely with my husband, John, because the entire experience of doing this with you has completely pierced my heart directly," even joking he'd be in "big trouble" had he not given her the part. And get this: Apparently, he almost chickened out when it came time to ask Blunt to star in it.

"I decided the safest thing to do was just have this experience on my own," Krasinski told The Hollywood Reporter. "I didn't want this to be the one job that she was like, 'Listen, I don't know if I love this, but I love you, so I'll do it.'"

Blunt, meanwhile, was busy prepping to take on another role — that of iconic, magical nanny Mary Poppins. But then she read her husband's script on a cross-country flight and "couldn't imagine the thought of letting someone else play the part," she told The Hollywood Reporter, so she asked Krasinski if she could have the role.

"It was like she was proposing to me," he recalled to HR. "It was one of the greatest moments in my career. I screamed out, 'Yes!' I'm surprised we didn't emergency land in San Antonio."

During her acceptance speech, Blunt brought tears to everyone's eyes, including Krasinski's.

I love how excited the It's Complicated star was to finally work with Blunt. Although, he is her number one fan, so I guess it's probably par for the course. In fact, he was such a big admirer of her work as the scene-stealing assistant in 2006's The Devil Wears Prada that he told E! News he's seen the flick about 75 times!

Oh, and here's what Kransinski had to say about working with Blunt on A Quiet Place at the 2019 Critics' Choice Awards, per E! News:

I got to make a movie about a love story and a love letter to my kids. I got to do it with the love of my life by my side, so I'm pretty sure it doesn't get much better than that.

Then the two of them hugged on stage:

And if that isn't just the most shining example of true love right there, then I don't know what is.

Wishing the best of luck to both actors tonight. No matter what happens, I can't wait to see them cheering each other on.