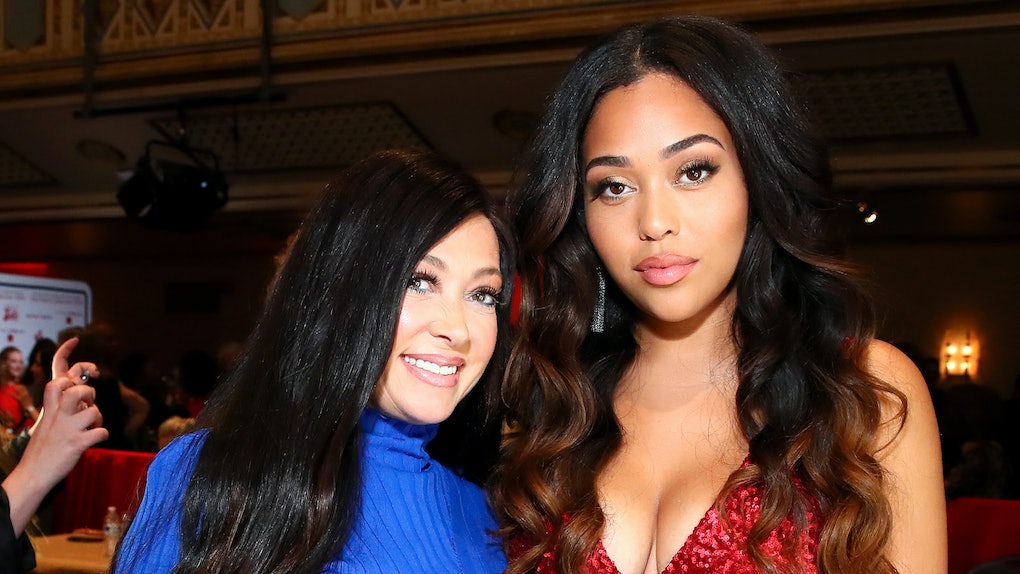 Jordyn Woods' mother just addressed the Tristan Thompson and Jordyn Woods drama on her Instagram in a big way. As always, with the Kardashian family drama and on the internet in general, people on social media made memes galore out of Jordyn Woods' Red Table Talk interview. People have taken that meme a step too far, however, creating unauthorized Jordyn Woods merchandise featuring quotes from her interview with Jada Pinkett Smith. Now, Elizabeth Woods' response to Jordyn's fans selling cheating scandal merch is here, and it's seriously calm, collected, and respectful to everyone involved despite its potentially upsetting subject matter.

Woods took to her Instagram on Sunday, April 7, to implore people who know the creators of unauthorized Jordyn merch to let her know their Instagram accounts. Her post featured three photos of the unauthorized merch, all of them showing different versions of Jordyn Woods' face from the Red Table Talk interview with the caption, "I don't need your situation."

The "I don't need your situation" line is a direct quote from Woods' interview. She was explaining that she wasn't interested in having Tristan Thompson for herself. She claimed later in the video that the "scandal" only consisted of Thompson kissing her as she left a party at his house.

At one point, she said to Pinkett Smith, "I would never try to steal someone's man. I don't need your situation."

People on Twitter loved that moment, using it as quotes on their tweets/Instagrams.

It's a pretty iconic quote, not going to lie. But what's not as iconic is people using Woods' image for profit, which is what's going down with this cheating scandal merch.

"We are well aware that many people have been selling merch," she said in her caption. "If you are aware of any companies selling merchandise and trying to benefit from our situation, please tag them below. We would like for the world to know that we have not authorized any of this and have not profited from any of these sales whatsoever. Thank you for all the support and love #teamigotthis."

Using a celebrity's image without their consent for profit is legally ambiguous at best and totally illegal at worst (if it reaches the threshold of libel, for example). While the merch Woods posted airs on the Team Jordyn side of things, the family clearly does not approve of her image being used for profit. And justifiably so.

It's also kind of just smarmy to take that vulnerable moment and slap it onto a pillow to make money off of it. Whether you're Team Jordyn or Team Kylie following all of this drama, it can't be denied that it took some backbone to go on Red Table Talk and talk about the entire cheating situation. So to take the moment and make it a meme/a product to profit from just isn't cool. By all means, use the savage "I don't need your situation" quote in your day-to-day, as it's a great line, but definitely don't support merchandise that features the face of someone who does not want their image used for the products.