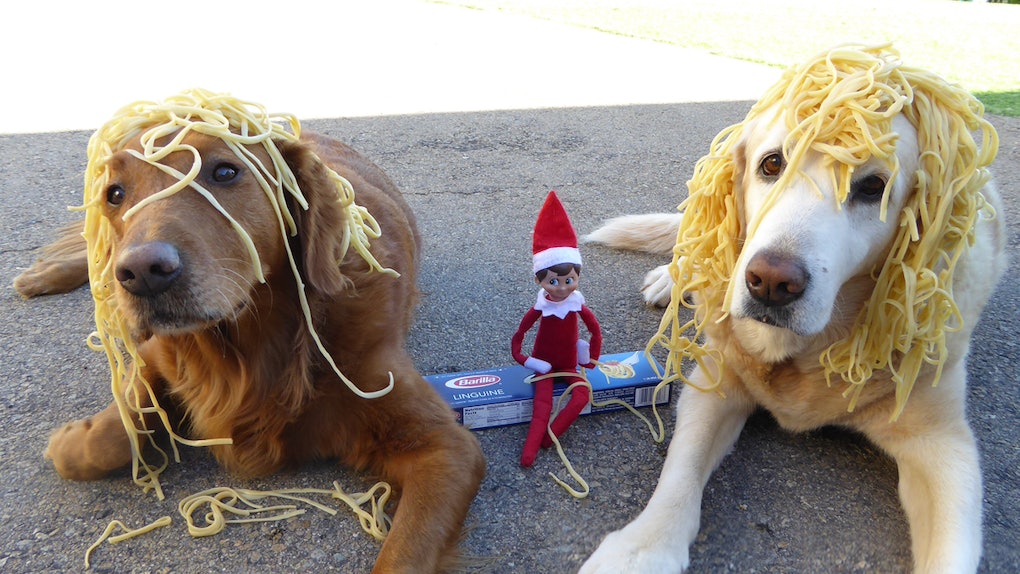 Many people consider The Elf on the Shelf to be a holiday tradition. If you're not familiar with it, let me clue you in. The book tells the story of Santa's elves who keep an eye on all of the children throughout the holiday season to make sure they're behaving. Parents move an elf around the house every day to show that he's always watching for Santa Claus. It's a bit mischievous, so it only make sense that this little guy would make a few enemies. These photos of Elf on the Shelf pranking dogs, and vice versa, will make your whole holiday.

Surf Dog Ricochet and Rina are two best friend dogs who have waged war against Elf on the Shelf. Ricochet is a service dog who decided to follow her dreams of being a surf dog, and now surfs with children with special needs, wounded warriors, people with disabilities, and veterans who are dealing with PTSD. Every year Ricochet holds a Howliday Giving Drive in effort to raise funds for a charity, and this year it's her Waves of Empowerment program.

As Ricochet and Rina prepare for their giving drive, Elf on the Shelf is trying to distract them with pranks. Ricochet's social media accounts document this ongoing war, and the pictures will seriously make you LOL. The battle is ruff stuff, but these 13 photos are pawsitively adorable. We're happy to have your back, Ricochet and Rina, and end this battle with that up-to-no-good Elf on the Shelf.

Abracadabra, bibbidi-bobbidi-boo. These dogs will do just about anything to get this pesky elf out of their business. Does someone have Harry Potter's number? I'm sure he could help.

That's it! This elf has taken it way too far. You don't go after a dog's treats — that's just wrong. You have not been a good boy, Elf on the Shelf, and you truly don't deserve those treats!

You only really need one bow for a Christmas present. Look at this mess you've made, Elf. I hope you know you're cleaning this up.

You were warned, Elf. This dog's got a license to kill, and will not brake for you. We told you not to get in the way of these doggos on a mission.

Elf, do you have anything you'd like to say for yourself? It doesn't have to end like this. Just say you're sorry for pranking these adorable pups, and no one has to get hurt.

6. You Got Silly Stringed

We warned you, Elf. We told you to back off, or we would silly string you. Now, you have you have to clean up this mess. Sorry, not sorry.

I've never had elf tacos before, but you know you should always try something at least once. I'm sure this taco will taste a lot like victory.

This elf is free. Please just take him far, far away. You don't even need to come pick him up yourself. Just tell us an address, and we'll gladly drop him off. Not a problem at all.

9. Are You Fur Real Right Now?

Oh, come on Elf. Dogs in wigs is the cutest prank you could do. Don't let him embarrass you, furry friends. This is a great look, and you both should consider growing out your fur.

Hey Elf, we'll spot you. Here's some extra weight. Now, just try getting out of this one.

A kick me sign? Real mature of you, Elf. Some of us are not resorting to childish tactics like this one.

Who wants breakfast? We like our toast extra crispy — like pretty much burnt to a crisp. Just put it on the highest setting possible, thanks.

What a waste of paper. I hope you're happy with the mess you've made yet again, Elf. There's something other than toilet paper that we'd like to flush down.