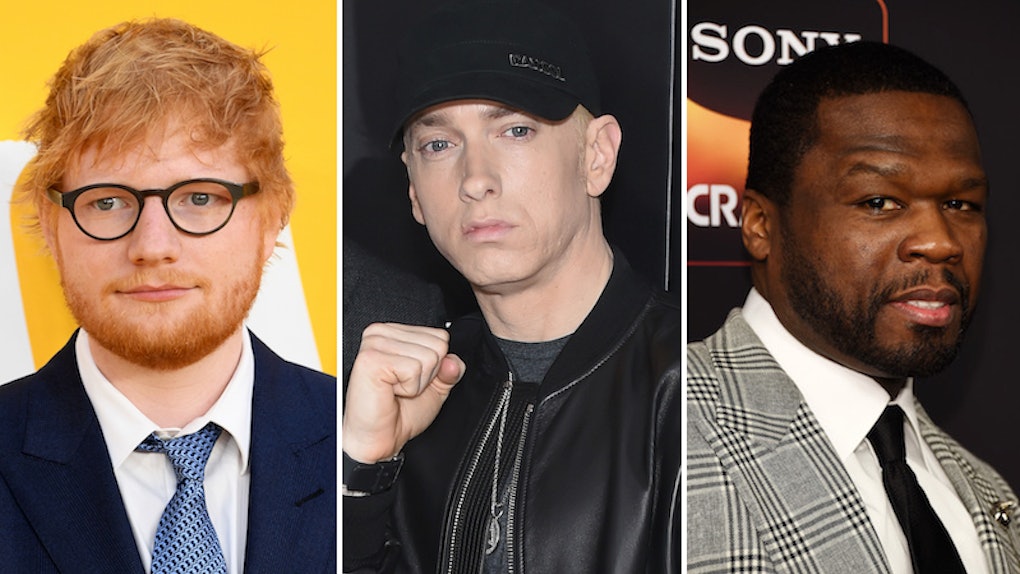 Ed Sheeran, Eminem, & 50 Cent's "Remember The Name" Lyrics Are Memorable In Every Way

At this point, I don't even know why I'm surprised by certain music collaborations anymore. Admittedly, I didn't see Ed Sheeran, Eminem, and 50 Cent coming. 50 and Em, to me, are of a different time. They wrote my go-to jams when I used to ride the school bus. I can remember being in 8th grade and it was Rachel's 14th birthday so we all sang "Go Shorty, It's Your Birthday" until the bus driver yelled at us. Still, here we are. Ed Sheeran, Eminem, and 50 Cent's "Remember The Name" lyrics might also withstand the test of time, and somewhere, an 8th grader might be singing the hit as we speak.

Ed Sheeran's sixth album No. 6 Collaborations Project features all kinds of cameos, but this one is particularly gaining interest thanks to the unlikely trio. The song is basically about how Sheeran, Eminem, and 50 Cent all faced ups and downs throughout their careers, but they came through it and, now, everyone will... well, remember their names. Here are some of the best lyrics (aka, all of them):

Yeah, I was born a misfit

Grew up 10 miles from the town of Ipswich

Wanted to make it big, I wished it to existence

I never was a sick kid, always dismissed quick

And if you're talkin' money, then my conversation shiftin'

My dreams are bigger than just bein' on the rich list

Watch how the lyrics in the songs might get twisted

My wife wears red, but looks better without the lipstick

I'm a private guy and you know nothin' 'bout my business

And if I had my 15 minutes, I must have missed 'em

20 years old is when I came in the game

And now it's eight years on and you remember the name

And if you thought I was good, well, then I'm better today

But it's ironic how you people thought I'd never be great

Put your phones in the air if you wanna be rocked

You know I want way more than I already got

I wanna crack corn and I wanna be paid

I wanna crack corn and I wanna be paid

I can still remember (What?) tryna shop a deal (Uh-huh)

From Taco Bell to TRL

I climbed the Billboard charts to the top until, as fate would have it (Yup)

Became an addict, funny 'cause I had pop appeal

But they said time would tell (What?) if I'd prevail (Huh?)

And all I did was (What?) put nine inch nails (Where?)

In my eyelids now (What?)

Without a doubt, by any means, if rap was skinny jeans

I couldn't do anything in 'em

I'd be splitting seams of denim when I'm spitting schemes

Which really means, no "if," "ands," or "buts" are squeezin' in between

Not even when I'm on my deathbed

Man, I feel like Ed, it isn't time to drop the mic yet

So why would I quit?

The thought that I would stop when I'm dead

Just popped in my head, I said it, then forgot what I said

It isn't my time to call it a day

Ain't nobody cold as me, I

Dress so fresh, so clean

You can find me in my whip, rockin' my Fendi drip

Man, you know just what I mean

Shinin', wrist with the rocks on it

Buscemis with locks on it

Everything my voice on, that shit knock, don't it?

It's just another episode, my hoes, I spoil 'em

Shit, I'm gettin' stupid money, what else we gon' do with money?

Bitch, we be ballin' out, the king, bring me 50 bottles

The turn up is so real, we 'bout to be super lit

Boy, I'm kickin' straight facts, that's just how we do this shit

Tomorrow, we hangin' over 'til we start feelin' sober

Then it's time to start it over, here we go again

And it's about time you remember the name

Kind of gets you going, doesn't it? You can listen to the whole thing below!

Sheeran announced his new album and the inspiration behind in late May on Instagram. In his post, he shared the tracklist which is all written in the same black handwritten font that Sheeran and Bieber's hit "I Don't Care" came out in. Sheeran's post explained:

Before I was signed in 2011, I made an EP called No.5 Collaborations Project. Since then, I’ve always wanted to do another, so I started No.6 on my laptop when I was on tour last year. I’m a huge fan of all the artists I’ve collaborated with and it’s been a lot of fun to make. No.6 Collaborations Project will be out everywhere on 12 July. It’s available to pre-order from midnight tonight local time and my song with @chancetherapper and @pnbrock will be out everywhere at the same time x

Naturally, "Remember the Name" is just one of the many incredible tracks on this album.

You've got a real talent, Sheeran. You should be a famous singer-songwriter or something.