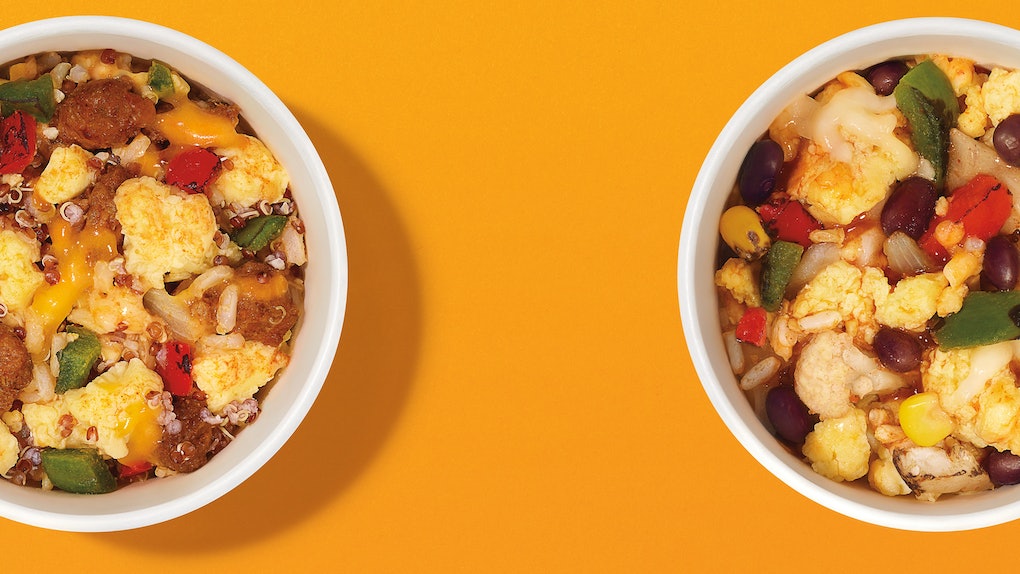 Although I have a raging sweet tooth, I often tend to opt for savory breakfasts over sweet. Anything combining eggs with hearty vegetables, carbohydrates, and — most importantly — hot sauce usually manages to satisfy all of my early morning cravings, and that's precisely why I'm so excited to try Dunkin's new Burrito Bowls. They're definitely about to add some ~spice~ to my next early coffee run.

While Dunkin' most often brings visions of doughnuts and Munchkins to mind, the New England-based fast food chain is now going to start offering Burrito Bowls at participating restaurant locations across the country, according to an Aug. 21 press release from the brand. And while Chipotle's sofritas, rice, beans, and cheese most likely come to mind when you hear "burrito bowl" the brand is really recreating more of a breakfast burrito bowl than anything else. You will be able to choose between two tasty varieties — a Fire Roasted Veggie Bowl and a Chorizo Bowl — and to be honest, opting for just one will be seriously difficult.

I, personally, have my sights set on the Fire Roasted Veggie Bowl. According to the press release, it combines a hearty base of eggs, cauliflower, brown rice, Monterey Jack cheese, and gooey pepper jack cheese, with a medley of of fire-roasted vegetables, which include: onions, red and green bell peppers, corn, and black beans. All of that is then drizzled in a hefty splash of Chipotle Sauce, so brace yourselves for a little kick.

Next up is the Chorizo Bowl, which sounds like a slightly heartier option. According to the press release, it combines eggs with diced chorizo, a blend of Monterey Jack and cheddar cheese, brown rice, red bell peppers, poblano peppers, red quinoa, and — last but not least — a smoky tomato sauce. Like I said before, choosing between the two will be nearly impossible. Both breakfast Burrito Bowl options sound seriously mouth-watering.

Dunkin' fans across the globe recall when Dunkin’ Bowls first became available as a test item for a limited time earlier this year in April 2019. Guests were able to choose between the Egg White Bowl and the Sausage Scramble. Both proved to be hugely successful, according to the brand, which is why they decided to launch a line of new Burrito Bowls. As long as there's hot sauce, I'm down.

Hopefully you embark on your Burrito Bowl run in time to enter Dunkin's "Sip. Peel. Win" promotion for August 2019. By purchasing a Large or Extra Large hot, iced, or frozen beverage between Aug. 21 and Sept. 24 at any location, you will be entered to win anything from money to gift cards. Every cup will come with a peel-off sticker, and if it says you've won a prize, you can pick it up at your nearest Dunkin' restaurant through Nov. 15. Yes, it's that simple, and it's seriously worth taking advantage of.

It pretty much goes without saying Dunkin's Burrito Bowls will ultimately pack a punch into that early morning coffee run. Between eggs, veggies, and all that hot sauce, I know it'll provide me with the wakeup call I need. Wakey, wakey!