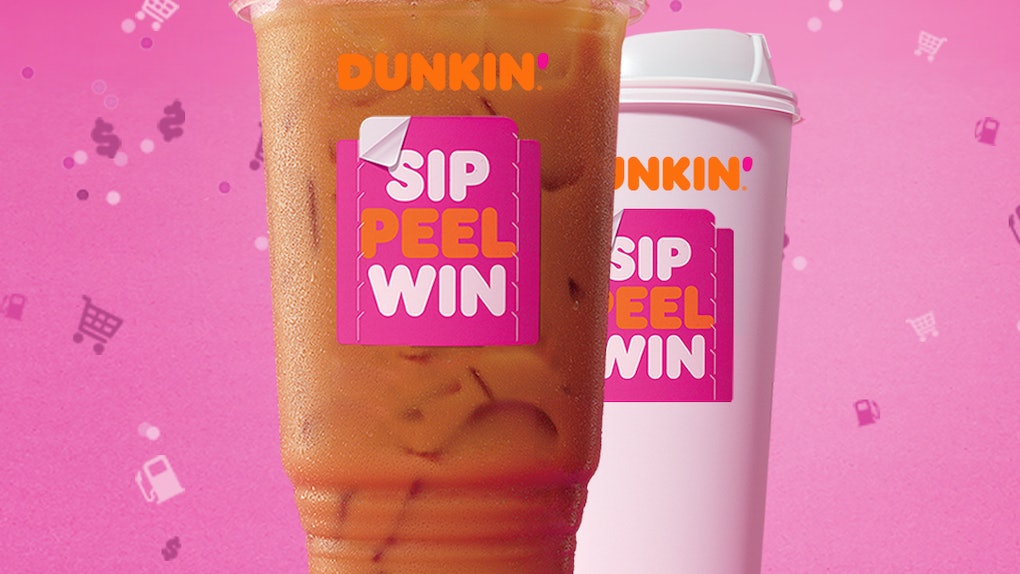 The summer isn't officially over until you've gotten your hands on one of the many free seasonal giveaways going on. Thankfully, there's still time to squeeze in one extra summer deal. One of your favorite coffee companies just announced the return of its nationwide promotion, "Sip. Peel. Win." Being a winner during Dunkin's "Sip. Peel. Win." game for 2019 is the best way to get your hands on a whole year's worth of freebies.

In an Aug. 20 press release, Dunkin' shared that its "Sip. Peel. Win." peel-and-win promotion will begin nationwide on Aug. 21. The stakes are high this year, with over $20 million worth of prizes available. So, how do you enter the sweepstakes?

All you have to do is visit a Dunkin' location and purchase a Large or Extra Large hot (excluding Hot Espresso), iced, or frozen beverage from Aug. 21 through Sept. 24. You'll automatically get a "Sip. Peel. Win" game piece on your cup. Simply peel the sticker to see if you've won an instant prize. If so, you can take your sticker right to a store to pick it up, and you can do so through Nov. 15. According to the official rules of "Sip. Peel. Win", you'll need to be a legal U.S. resident that is over 13 years old to participate.

This year, Dunkin' is raising the level by including a unique code on select game pieces. With the code, you'll be able to enter a daily and grand prize sweepstakes at the "Sip. Peel. Win" website. The daily prizes include cool home fixtures like Keurig Coffee Makers, Google Home Hubs, and 4K TVs. For shopping lovers, there are also tons of gift cards that you can use at Best Buy, Grubhub, Lyft and more!

The grand prize is what really set this giveaway apart from the others. The grand prize lineup, four of which will be given away throughout the promotion, includes a prize pack with Dunkin' coffee for a year (awarded in the form of $598 in Dunkin' gift cards), Shell gasoline for a year (fulfilled in the form of a $2,500 gift card), a $5,200 credit for Shipt groceries for a whole year, JetBlue round-trip tickets for two up to $2,000 (can anyone say, vacation time?), a $2,500 Amazon.com gift card, and a $2,000 home improvement gift card. TBH, between the daily prizes and the four grand prizes up for grabs, you really can't go wrong when you get in on this promo.

This is the third year of the popular "Sip. Peel. Win" program, which Dunkin' launched in 2017. According to Dunkin, it's a way to treat the fans of the brand. "We're excited to head into fall by once again showing our appreciation for our loyal customers with the chance to win fantastic prizes for running on Dunkin'," Tom Manchester, Senior Vice President, Integrated Marketing of Dunkin' U.S., shared in the press release.

The Aug. 21 start of "Sip. Peel. Win" is also accompanied by another comeback: The return of Dunkin's Pumpkin Flavored Coffees. The company will be adding more fire to the pumpkin craze with a new new pumpkin espresso beverage, the Cinnamon Sugar Pumpkin Signature Latte. The Cinnamon Sugar Pumpkin Signature Latte will definitely be a direct rival to Starbuck's Pumpkin Spice Latte, which doesn't yet have an official 2019 release date.

So, what are you waiting for? Visit your local Dunkin' and hit two birds with one stone by playing "Sip. Peel. Win" and indulging in pumpkin-flavored goodies.