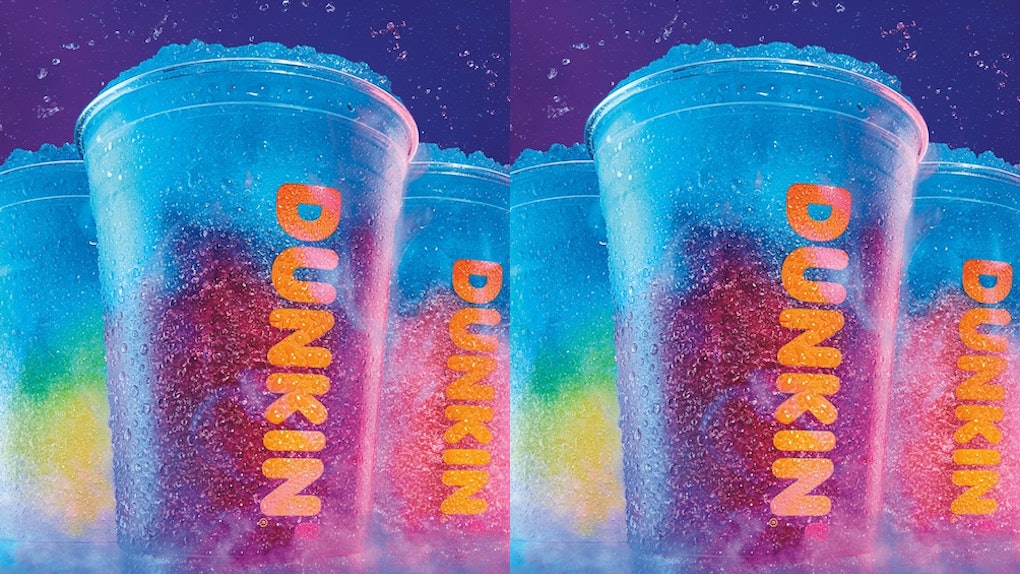 One of the very best ways to cool off when you're melting from the hot summer weather is with an ice cold frozen drink. And while a margarita or daiquiri might be the first thing that comes to mind, sometimes, a Dunkin' Coolatta is totally where it's at. Luckily, just in time for warmer weather, the New England-based coffee chain is running an irresistible deal on their famous frozen drinks for a limited time. So, make sure to get in on Dunkin's May 2019 deal on $2 Coolattas as soon as you possible can. You'll definitely want to get in on this before time runs out.

Dunkin' really upped it's Coolatta game when the chain debuted their new Cosmic flavors in April 2018. And while that was undeniably a dream come true, the chain is upping the ante even more, offering all Coolatta frozen beverages of any size for only $2 all day long, according to a press release. That's right — through May 28, you can get that delectable frozen beverage for only $2 (!) all day long at participating Dunkin' restaurants nationwide. Yes, it's a huge deal, and you can bet your bottom dollar I'll be indulging on this like, several times a day.

Additionally, in honor of the 50th anniversary of the Apollo 11's lunar landing on July 20, Dunkin' recently unveiled a number of celestial-inspired treats that my space-lovin' heart won't be able to handle. First up is the Cosmic Grape Coolatta, which combines sweet grape and tangy blue raspberry flavors. If you ask me, it's one of the greatest Coolatta flavors I've yet to try.

Next up is the Shooting Star Donut, which is essentially a star-shaped treat covered in white icing, along with blue, yellow, and purple popping candy clusters that taste just like blue raspberry. It sounds a little trippy, but don't worry — I think we can both handle it.

Between Dunkin's new Cosmic Grape Coolatta flavor and their delectable Coolatta deal, I know for a fact my summer will be filled with frozen drinks galore. So I'll definitely be using these Instagram captions as a reference when posting all of my frozen drink pics. Some refer to the beach, others elude to the inevitable brain freeze, and some just remind you to "sip back and relax." They're honestly adorable, and will make for some super sweet 'grams this summer season.

While margs are undeniably fantastic for cooling off amidst a heat wave, Dunkin's Coolatta frozen drinks are totally a summer necessity. So, I seriously could not be more grateful that Dunkin' is offering them for $2 a pop this season. While the new Celestial Grape is to die for, each and every one of the chain's OG Coolatta flavors are pretty hard to beat. I know making a decision in the realm of flavors will be undeniably difficult, but as they say, "Keep calm and drink on." I really think we can make it through this tough decision together, one sip at a time.