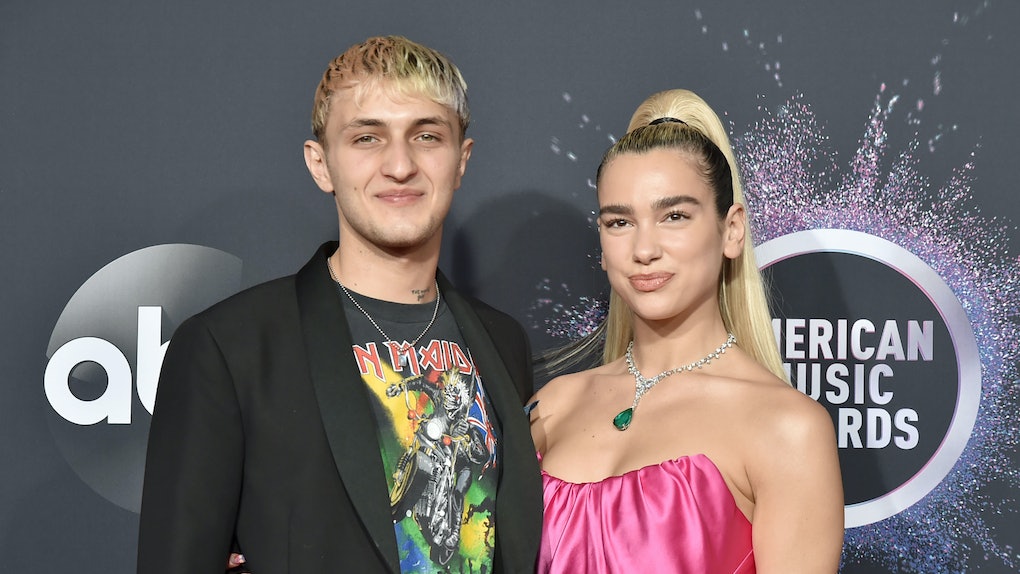 Dua Lipa and Anwar Hadid may not have won any awards at the 2019 American Music Awards, but they certainly deserved one — for Cutest New Couple. They walked a red carpet for the first time together before the award show on Nov. 24, cementing their relationship status after months of romance rumors and lovey-dovey Instagrams. When they're together, they can barely keep their hands to themselves, but unfortunately, Dua Lipa and Anwar Hadid's astrological compatibility is far from a perfect match. Their zodiac signs are different as can be, and I'm not sure the idea of opposites attracting applies to these two.

Dua was born on Aug. 22, which makes her a loud-and-proud Leo. Gigi and Bella's younger bro has a June 22 birthday, which makes him a sensitive, sentimental Cancer. Water may put out fire, but in this case, a water sign doesn't stand a chance. Fiery Leos are unapologetic, vivacious, and always on the move, where sweet Cancer is basically the equivalent of a human teddy bear. Dua and Anwar seem totally into each other, but according to their zodiac signs, it might only be a matter of time before these highly emotional individuals find themselves feeling unfulfilled.

Cancers tend to be homebodies who value security and stability above all. If it was up to them, they'd spend all their time surrounded by loved ones and swathed in a giant blanket. Anwar is certainly all about coziness — as he told W during May 2019 interview, his go-to outfit for days off is "sweatpants and a robe — like a comfortable, big cardigan." His desire for comfort extends beyond his wardrobe choices, too. In her own interview with W in February 2019, Anwar's mom Yolanda talked about how shy and reserved her youngest is compared to his sisters. "Unless I push him into things, he likes to be in the background and do his thing," she said of Anwar. "It's just not part of his nature."

Dua, on the other hand, thrives in the spotlight, as most Leos do. Her boundless energy and confidence is exactly what has helped her become so popular, and she never hesitates to put herself out there. "It's a 24-hour job," she explained to The Guardian in April 2018 when asked about her incredible work ethic. "And at this point I want to be able to say yes to everything. Every tour, every show, every shoot, every whatever." She's also not shy when it comes to taking action. While discussing an ex with Rolling Stone in February 2018, she explained how little trouble she had calling it quits. "I dated this guy who literally would never eat a single vegetable," she said. "I was like, 'This is terrible. You eat like a five-year-old. I'm f*cking out.'"

Both Cancers and Leos tend to make decisions based on emotions rather than logic, but where Cancers are fragile and easily bruised, Leos are full of fire and spite. Anwar is sentimental, and you can tell from the way Valentino's newest fragrance model associates memories with specific scents. (Lavender in particular makes him "feel really nostalgic.")

But just as Dua dumped that reluctant veggie-eater, the "New Rules" singer doesn't seem to get attached to much of anything. When asked about her inspiration for "Hotter Than Hell" by GQ in April 2018, Dua explained that it was inspired by a bad breakup. "...it was like, I'm done with feeling sorry for myself," she said, "so I want to flip the script and make it seem like he can't get enough of me and that I was hotter than hell, even though I didn't feel that way."

Though Leos never apologize and Cancers are constantly apologizing, these two seem to have one other thing in common: They both don't see themselves changing for anyone. According to Anwar, stardom has never had an effect on who he is. "Honestly, I feel like I'm still the same person that I've been since I was young," he told People in October 2019. "It's all about staying genuine and keeping your family and friends around." Dua similarly has a strong sense of self. When asked by GQ about her barbed wire heart tattoo, she replied, "I got that because I always wear my heart on my sleeve and I'm not going to change that. I'm never going to change myself, but it's in barbed wire because I should protect my heart no matter what, I think."

They may not be open to change, but these two definitely have big hearts and love without restraint. Even if they can never agree about whether to go out or stay in, maybe Dua and Anwar's shared affection will help them find more common ground.