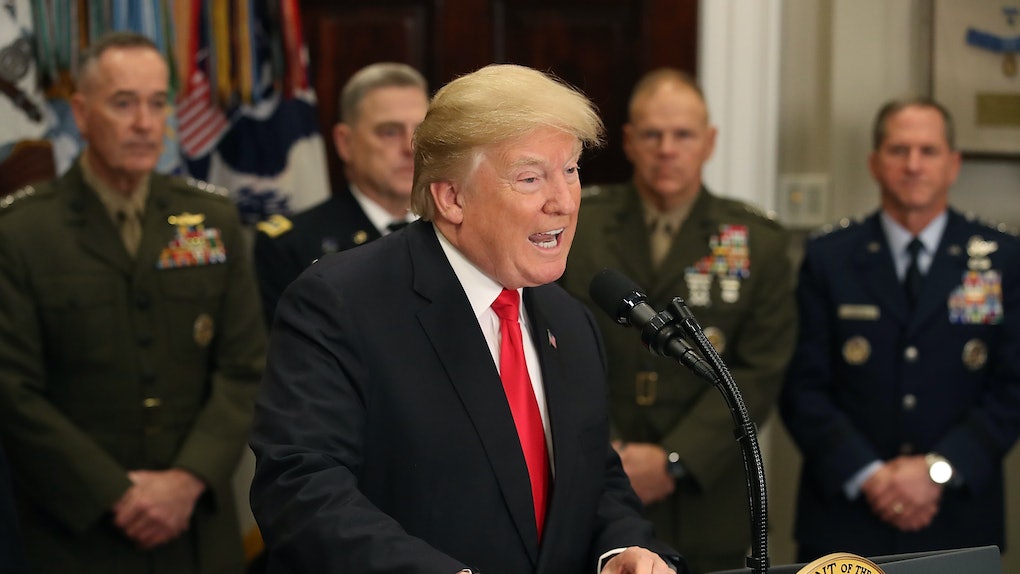 Everybody had been watching the Alabama race for U.S. Senate with bated breath during what turned out to be a surprisingly contentious race in a normally solid red state. After Democratic candidate Doug Jones pulled out a narrow win, which cuts into Republicans' slim majority in the Senate, the question of whether President Donald Trump would respond angrily came into play. Turns out, though, Donald Trump’s response to the Alabama Senate race was unusually tame, with the president avoiding criticizing any party after the GOP loss.

On Tuesday night, Dec. 12, Trump's Twitter account instead sent out a message congratulating Jones and telling Republicans to look forward to the next race. "Congratulations to Doug Jones on a hard fought victory," the tweet read. "The write-in votes played a very big factor, but a win is a win. The people of Alabama are great, and the Republicans will have another shot at this seat in a very short period of time. It never ends!"

The next morning, another tweet was sent out from Trump's account, this time analyzing the effect Trump had during the Republican primary for the special election. "The reason I originally endorsed [primary candidate] Luther Strange (and his numbers went up mightily), is that I said Roy Moore will not be able to win the General Election," Wednesday morning's tweet read. "I was right! Roy worked hard but the deck was stacked against him!"

Strange is currently the interim senator who has been serving in the seat previously occupied by former Sen. Jeff Sessions. The special election was held to permanently replace Sessions, who left the Senate earlier in the year to become President Trump's attorney general.

Trump's responses to the election did not make any mention of the sexual misconduct claims made against Roy Moore. The claims, which were sparked by a scathing Washington Post report, rocked the Republican candidate's campaign and prompted a number of Republicans to rebuke him. However, Moore has consistently denied all of the accusations.

What This Means For The Senate

Outside of those actually living in Alabama, the president was one of the people who had the most at stake. He actively supported Moore in the race for the Senate, both publicly endorsing him via Twitter and recording robo-calls — sent to Alabama voters in the days before the election — urging Alabamans to get out the vote for Moore. More importantly from a policy perspective, Trump needed Moore in the Senate — with a slim, slim majority for Republicans, they couldn’t afford to lose the Alabama seat currently held by the GOP. Republicans currently hold only a two-seat margin in the Senate (counting the two Independents who caucus with Democrats). The loss of the Alabama seat makes it that much harder for Republicans to pass their legislation.

For perspective, the GOP's efforts to pass a health care reform bill — and repeal the Affordable Care Act (aka Obamacare) — dramatically failed after three Republican senators voted no on the GOP bill, adding to the 48 nays from Democrats. With 49 senators now within the Democratic caucus, a similar bill could fail if just two Republican senators defect and decide to vote no.

Doug Jones' victory on Tuesday night gave Democrats their first Senate victory in Alabama in 25 years. The last Democrat to win in the state was Alabama's senior senator, 83-year-old Richard Shelby. Shelby won reelection for his Senate seat as a Democrat in 1992, but would eventually switch party affiliations.

Jones' bid for election was boosted by a substantial turnout by Black voters, while over 20,000 write-in votes were submitted on a night that the race was decided by a margin close to that same number.

As Trump alluded to in his response, Jones will indeed serve an abbreviated term of three years, which is what was left of Sessions' term. For now, though, Democrats will enjoy flipping a red state blue, if even only temporarily.