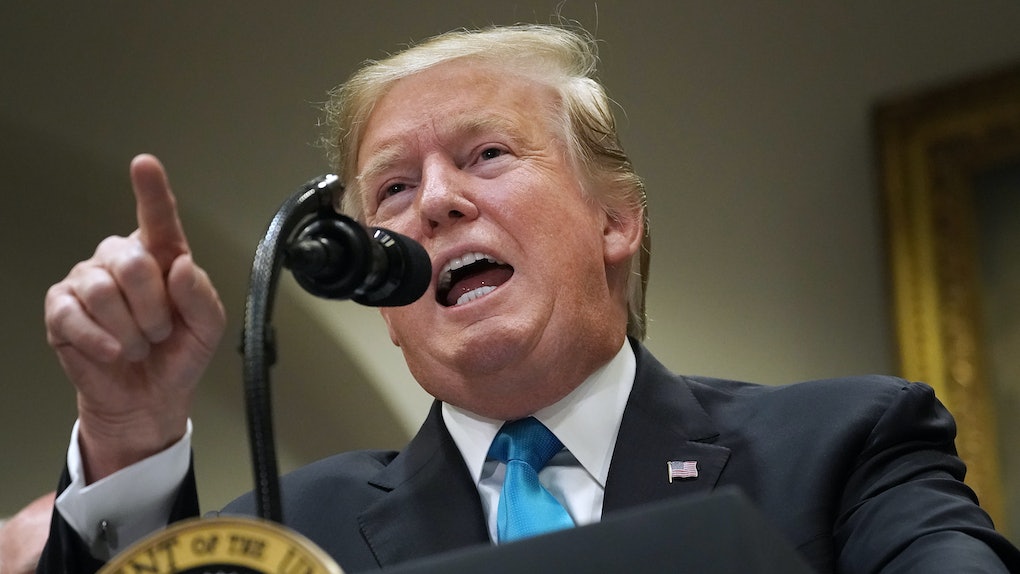 The comparisons between President Richard Nixon, the Watergate scandal that helped end his presidency, and President Donald Trump are steadily rolling in, particularly following the release of the Mueller report on the investigation into potential collusion between Russia and members of the Trump 2016 campaign. Although the report found no collusion, it outlined some possibly serious infractions by the president, which has prompted widespread backlash. Elite Daily previously reached out to the White House for comment on the report, but did not hear back. Now, the president has finally spoken out about the drama, and Donald Trump's comments on the Mueller report and Watergate say that there's one big difference.

Trump opened up about the subject on Monday, June 10 — the same day that former Nixon White House counsel and star Watergate witness John Dean appeared before the House Judiciary Committee to testify on the Mueller report and its implications. Dean was the coordinator of the cover-up of the Watergate burglary, the major scandal that forced Nixon to resign before he could be removed from office after being impeached on obstruction of justice. Nixon was later pardoned by Gerald Ford, while Dean pleaded guilty to obstruction of justice for his part in the scandal. Notably, the Mueller report expressly stated it did not clear Trump of obstruction of justice, the same crime of which Nixon was accused.

During the June 10 testimony, Dean told the panel about six similarities between Trump's actions and those of Nixon. According to Axios, Dean pointed out both Trump and Nixon's alleged attempts to stifle and exert control over the investigations, mislead the press, pardon witnesses to prevent them from testifying, and more. “In many ways the Mueller report is to President Trump what the so-called ‘Watergate road map’ ... was to President Richard Nixon,” Dean told the panel. “Mueller has provided this committee with a road map [for Trump's impeachment],” he said in his statement.

If he didn't make it clear enough before, Trump said on Monday that he isn't going for any of that. According to Politico, Trump addressed the matter while speaking at an event in honor of Simon Pagenaud, the 2019 Indianapolis 500 champion, on June 10. He said:

We have no collusion, no obstruction, no anything. When you look at past impeachments, whether it was President Clinton or — I guess President Nixon never got there. He left. I don’t leave. A big difference. I don’t leave.

Trump had also criticized Dean earlier in the day, tweeting that he is a “disgraced Nixon White House Counsel who is a paid CNN contributor.” He added, “Democrats just want a do-over which they’ll never get!”

So, Trump is obviously sticking to his guns over this matter. Since the Mueller report came out back in March, he has repeatedly criticized the ongoing investigative matters related to the probe and claimed that there was no wrongdoing by him or his campaign.

That hasn't stopped the impeachment talks, though. Those calls only grew after Special Counsel Robert Mueller elaborated on his findings in an address on May 29. During the remarks, he suggested that the only reason he could not charge Trump with a crime is because of a Justice Department policy prohibiting the indictment of a sitting president. "That is unconstitutional," he said in regards to pursuing criminal charges. Mueller went on to note that “the Constitution requires a process other than the criminal justice system to formally accuse a sitting president of wrongdoing," which seemed to refer to impeachment proceedings.

As you can imagine, the statement almost immediately had several members of Congress calling for Trump's removal from office. As of June 11, the president has not been formally accused of or charged with any crime, and no serious impeachment proceedings have been started.

Obviously, things are getting more heated by the day. Keep a look out for what happens next.