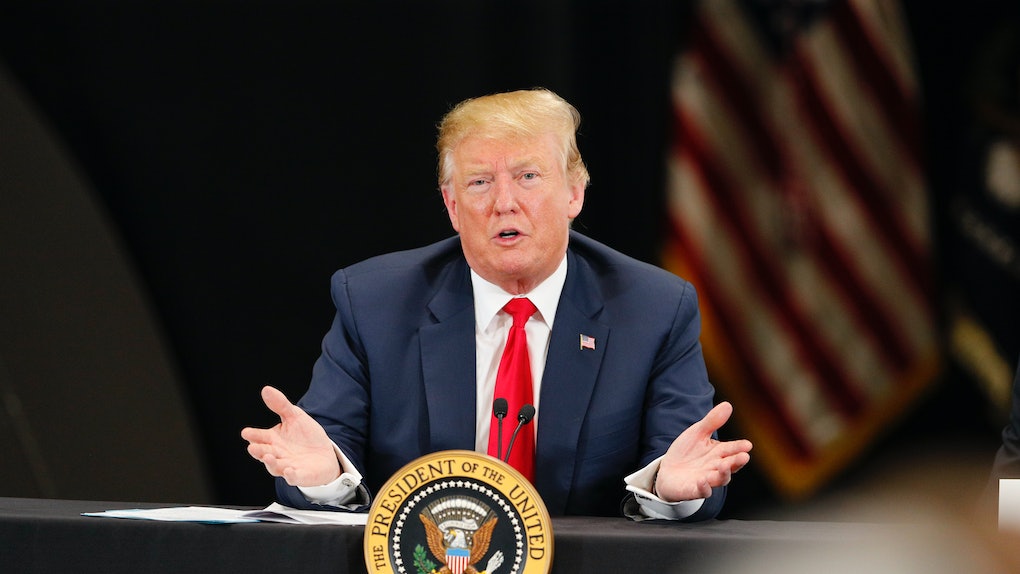 It's starting to feel like I'm stuck in a Mueller loop that will go on forever. It feels like it's been an infinite amount of years and the drama surrounding Special Counsel Robert Mueller's investigation into possible Russian involvement in the 2016 presidential election has yet another chapter — but it could be the final one. All the details are on the table, and Trump's response to the redacted Mueller report used his favorite (and weirdest) meme about Game of Thrones. IDK, maybe he just really had all his Season 8 fan theories on the brain.

On Thursday, April 18, the special counsel's full report finally went public, though redacted. Just to put that in perspective, that's after nearly two years, 500 search warrants, and 2,300 subpoenas plus a few indictments, according to The New York Times. (Not to mention the 400ish pages of the report itself. Happy reading!) An hour and a half before the release of the report, Attorney General William Barr held a press conference, in which he discussed certain decisions about the report and took questions. As the press conference ended around 10 a.m. ET, with an hour to go before the publish of the report, Trump apparently took it — again — as vindication.

The president, once again, tweeted out a meme of himself standing in a foggy setting, overlaid with Game of Thrones-font text. In this case, the image showed Trump walking away, as the captions read,

No collusion. No obstruction. For the haters and the radical left Democrats — Game Over.

The president has previously been really into the Game of Thrones format meme, tweeted out a play on the series' popular tagline, "Winter is coming," but instead sent out an image of himself with "Sanctions are coming," written on it in the classic Game of Thrones font, referring to his plan to reimpose sanctions on Iran, according to Rolling Stone.

For what it's worth, HBO, which produces Game of Thrones, doesn't seem thrilled. In a statement to The Hollywood Reporter, the network said that though they could "understand the enthusiasm for Game of Thrones," they still "prefer our intellectual property not be used for political purposes."

The actual report was a little less gratifying than seeing the president meme Game of Thrones again. The report, which was supposed to be lightly redacted, according to The Washington Post, ended up with quite a few blacked out parts — I'm talking whole pages. But buried among all the redacted prose, there were some interesting remarks (the report is over 400 pages, so there's gotta be some meat there) — particularly the 10 instances Mueller weighed in trying to determine whether Trump had obstructed justice. Among them were how the president dealt with his former national security adviser Michael Flynn, his firing of former FBI Director James Comey, asking former Attorney General Jeff Sessions not to recuse himself from the investigation, and his instructing White House counsel Don McGahn to fire special counsel.

On March 24, Barr released a four-page summary of Mueller's findings. Barr wrote in his letter, quoting Mueller, that "the investigation did not establish that members of the Trump campaign conspired or coordinated with the Russia government" during the 2016 presidential election. On the question of whether Trump obstructed justice in any way, the special counsel left it up to the Department of Justice (DOJ) to decide whether Trump was guilty, which didn't find "sufficient" evidence to make that decision. The DOJ did not respond to Elite Daily's request for comment about Barr's letter at the time.

However, some weren't satisfied with the summary, and called for the entirety of Mueller's report to be made public. On April 3, the House Judiciary Committee voted to authorize a subpoena to obtain Mueller's full report, so that the committee could comb through it on their own, according to The Hill. But on April 9, Barr told Congress that he would hand over the report "within a week," according to The New York Times. OK, so it was a little more than a week — but nine days later, here we are.

In his April 4 testimony before Congress, as part of the process to obtain the full report, Barr said, per CNN, he "[thinks] it's important that the public have an opportunity to learn the results of the special counsel's work," but added that parts will be redacted.

The redactions fall into four main categories, as related by NPR: information about grand jury material, foreign intelligence, ongoing cases, or information that would violate the privacy of people "peripheral" to the investigation.

Congress, however, still wants the full report — meaning without any redactions. Following Barr's testimony before Congress and his vow to turn over a redacted report, House Judiciary Chairman Jerrold Nadler (D-New York) sent a letter to Barr on April 11 stating that they expect the unredacted report, according to a copy of the letter shared by Nadler on Twitter. With it, he wrote, "Read our letter to AG Barr reasserting our expectation that Congress receive the full, unredacted Mueller report." But with Barr releasing a redacted version despite Congress' "expectations," Barr and Nadler might end up taking the issue to court.

This has been going on a long time, and it feels like even longer, is it finally put to bed? Because I'm ready to go to bed.