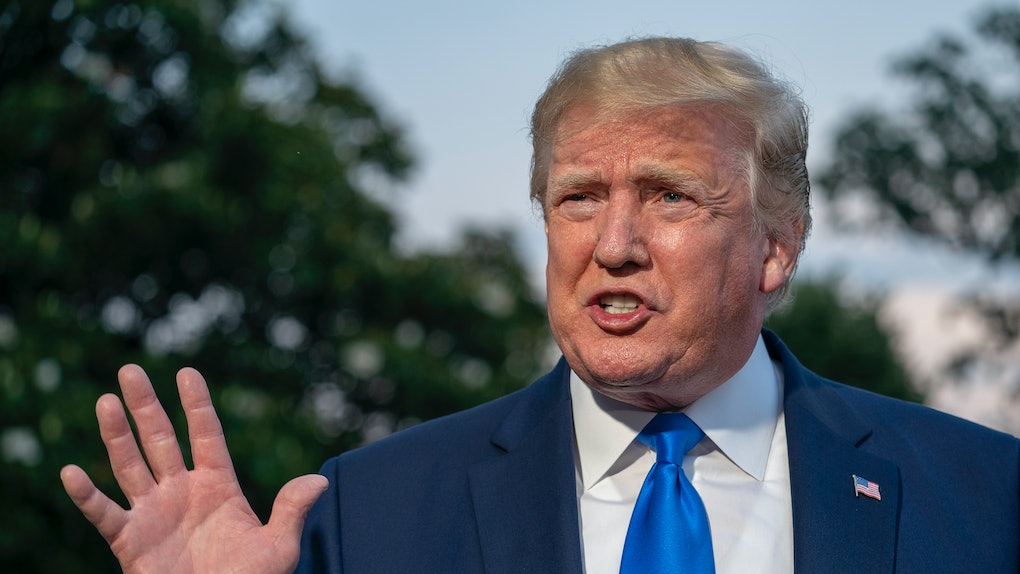 If you thought this week was tough for you, imagine being House Speaker Nancy Pelosi (D-California). She got slammed by President Donald Trump in a new interview, which isn't totally surprising when it comes to these two, but things got really heated this time. Donald Trump's comment about Nancy Pelosi being a "nasty" person stands out in particular, because it's a word he's used to label some of his biggest rivals.

The president threw the barb on Thursday, June 6, while interviewing with Fox News. The interview was apparently supposed to commemorate the 75th anniversary of D-Day and honor the victims who died fighting in the World War II battle, but Trump quickly turned his attention to Pelosi. With the graves of the victims behind him, the president called Pelosi a “nasty, vindictive, horrible person.” Elite Daily reached out to Pelosi's team for comment but did not hear back by the time of publication.

“I think she’s a disgrace. I actually don’t think she’s a talented person, I’ve tried to be nice to her because I would have liked to have gotten some deals done,” he told host Laura Ingraham, adding, “She’s incapable of doing deals, she’s a nasty, vindictive, horrible person, the Mueller report came out, it was a disaster for [Democrats].”

It's worth pointing out, though, that while the report on the investigation into Russian election meddling found no collusion, it expressly noted that it did not clear the president of obstruction, which has had several Democrats calling for Trump's impeachment. Pelosi, however, has broken from her peers, reportedly telling Democrats on June 4, "I don’t want to see him impeached, I want to see him in prison," according to Politico. Elite Daily reached out to Pelosi's team for confirmation and additional comment but did not hear back by the time of publication.

If you've been paying attention to the news for the past, say, two years, you know that things have gotten seriously icy between Trump and Pelosi at times. The two have clashed on everything from immigration to federal funding — but now, it looks like the president is totally over their relationship (or lack thereof).

Trump's use of the word "nasty" proves that even further. Trump famously used the word during the 2016 election cycle to describe his then-Democratic rival Hillary Clinton (who he seemingly doesn't like at all.) For example, in the middle of a presidential debate that October, Trump snarled that Clinton was “such a nasty woman.”

Trump reportedly used the word more recently against Meghan Markle after learning that the former actress called him "divisive" and "misogynistic" in 2016. "I didn’t know that. What can I say? I didn’t know that she was nasty," Trump appeared to tell The Sun on May 31.

He went on to say that he never made the comment, tweeting on June 2 that it was "made up by the fake news media." But get this: He said it on tape. The White House did not return Elite Daily's previous request for comment on the remarks, but said to Politico that Trump was responding to Markle's "critiques" of the president. Kensington Palace declined to comment.

On June 5, Trump tried to clarify those comments in an interview with Piers Morgan on Good Morning Britain. According to ABC News, he said:

Of course, some people weren't buying it. Decide for yourself whether he truly meant those positive comments or not. Maybe they mean that he and Pelosi can reach a good spot some time in the future, too.